Emily Greene Balch (January 8, 1867 – January 9, 1961) was an American economist, sociologist and pacifist. Balch combined an academic career at Wellesley College with a long-standing interest in social issues such as poverty, child labor, and immigration, as well as settlement work to uplift poor immigrants and reduce juvenile delinquency.

She moved into the peace movement at the start of World War I in 1914, and began collaborating with Jane Addams of Chicago. She became a central leader of the Women's International League for Peace and Freedom (WILPF) based in Switzerland, [1] for which she won the Nobel Peace Prize in 1946. [2]

Balch was born to a prominent Yankee family in Jamaica Plain, Massachusetts, a neighborhood of Boston, [2] the daughter of Francis V. and Ellen (née Noyes) Balch. Her father was a successful lawyer and one time secretary to United States Senator Charles Sumner. [3] She graduated from Bryn Mawr College in 1889 after reading widely in the classics and languages and focusing on economics. She did graduate work in Paris and published her research as Public Assistance of the Poor in France (1893). She did settlement housework in Boston before deciding on an academic career.[ citation needed ]

She then studied at Harvard University, the University of Chicago, and the University of Berlin, and began teaching at Wellesley College in 1896. She focused on immigration, consumption, and the economic roles of women. In 1913, she was appointed to serve as Professor of Economics at Wellesley, following the resignation of political economist Katharine Coman, who had founded the Department. [4] That same year, Balch was promoted from Associate Professor to Professor of Political Economy and of Political and Social Science. [5]

Balch served on numerous state commissions, such as the first commission on minimum wages for women. She was a leader of the Women's Trade Union League, which supported women who belonged to labor unions. She published a major sociological study of Our Slavic Fellow Citizens in 1910. [6]

She was a longtime pacifist, and was a participant in Henry Ford's International Committee on Mediation. When the United States entered the war, she became a political activist opposing conscription in espionage legislation, and supporting the civil liberties of conscientious objectors. She collaborated with Jane Addams in the Women's Peace party and numerous other groups. [7]

In a letter to the president of Wellesley, she wrote we should follow "the ways of Jesus." Her spiritual thoughts were that American economy was "far from being in harmony with the principles of Jesus which we profess." [8] Wellesley College terminated her contract in 1919. Balch served as an editor of The Nation , a well-known magazine of political commentary. [6]

Balch converted from Unitarianism and became a Quaker in 1921. She stated, "Religion seems to me one of the most interesting things in life, one of the most puzzling, richest and thrilling fields of human thought and speculation... religious experience and thought need also a light a day and sunshine and a companionable sharing with others of which it seems to me there is generally too little... The Quaker worship at its best seems to me give opportunities for this sort of sharing without profanation." [9]

Her major achievements were just beginning, as she became an American leader of the international peace movement. In 1919, Balch played a central role in the International Congress of Women. It changed its name to the Women's International League for Peace and Freedom and was based in Geneva.

She was hired by the League as its first international Secretary-Treasurer, administering the organization's activities. She helped set up summer schools on peace education and created new branches in over 50 countries. She cooperated with the newly established League of Nations regarding drug control, aviation, refugees, and disarmament. In World War II, she favored Allied victory and did not criticize the war effort, but she did support the rights of conscientious objectors. [10]

John Randall, professor of philosophy at Columbia University, and his wife Mercedes Randall, one of the leaders of the US section the Women's International League for Peace and Freedom and a friend of Emily Greene Balch, initiated a campaign to nominate Balch for the peace prize. The campaign was supported by five US organizations that established a committee called the "Committee to sponsor Emily Greene Balch for the Nobel Peace Prize". The organizations were the Women's International League for Peace and Freedom, the National Federation of Settlements, the Women's Trade Union League of America, the National Council of Women of the U.S.A. and the National Association for [the] Advancement of Colored People. [11]

She won the 1946 Nobel Peace Prize for her work with the Women's International League for Peace and Freedom (WILPF). She donated her share of the prize money to the WILPF. [6] Her acceptance speech highlighted the issues of nationalism and efforts for international peace. [6]

Balch never married. She died the day after her 94th birthday.

Jane Addams was an American settlement activist, reformer, social worker, sociologist, public administrator and author. She was an important leader in the history of social work and women's suffrage in the United States and advocated for world peace. She co-founded Chicago's Hull House, one of America's most famous settlement houses. In 1910, Addams was awarded an honorary master of arts degree from Yale University, becoming the first woman to receive an honorary degree from the school. In 1920, she was a co-founder of the American Civil Liberties Union (ACLU). 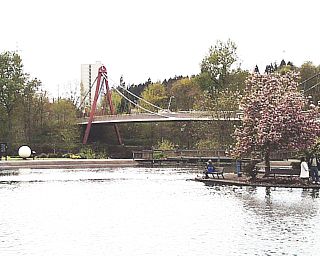 Alton Baker Park is located in Eugene, Oregon, United States, near Autzen Stadium. It was named for Alton F. Baker Sr., the eleventh owner of Eugene's The Guard newspaper. It features duck ponds, bicycle trails, a dog park and a disc golf course, and directly touches the Ferry Street Bridge across the Willamette River. 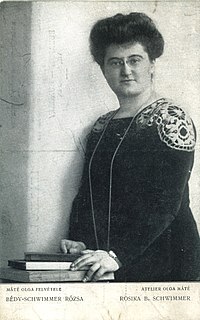 Rosika Schwimmer was a Hungarian-born pacifist, feminist, world federalist and female suffragist. A co-founder of the Campaign for World Government with Lola Maverick Lloyd, her radical vision of world peace led to the creation of the first World Federalist organization of the 20th century. 60 years after she envisaged it, the movement she helped to create indeed took a leading role in the creation of the International Criminal Court, the first permanent international tribunal tasked with charging individuals with war crimes, crimes against humanity and genocide. Schwimmer was born into a Jewish family in Budapest in 1877, she graduated from public school in 1891. An accomplished linguist, she spoke or read eight languages. In her early career, she had difficulty finding a job that paid a living wage and was sensitized by that experience to women's employment issues. Gathering data to provide statistics on working women, Schwimmer came into contact with members of the international women's suffrage movement and by 1904 became involved in the struggle. She co-founded the first national women's labor umbrella organization in Hungary and the Hungarian Feminist Association. She also assisted in organizing the Seventh Conference of the International Woman Suffrage Alliance, hosted in Budapest in 1913.

The Women's International League for Peace and Freedom (WILPF) is a non-profit non-governmental organization working "to bring together women of different political views and philosophical and religious backgrounds determined to study and make known the causes of war and work for a permanent peace" and to unite women worldwide who oppose oppression and exploitation. WILPF has national sections in 37 countries.

Ellen Fitz Pendleton was an American educator. She was president of Wellesley College for 25 years and notably expanded it financially and physically. 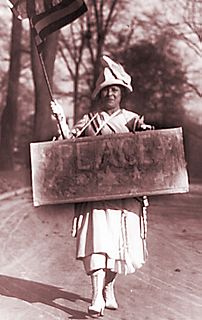 The Wisconsin Plan was a proposal created by Julia Grace Wales to end the First World War.

The International Congress of Women was created so that groups of existing women's suffrage movements could come together with other women's groups around the world. It served as a way for women organizations across the nation to establish formal means of communication and to provide more opportunities for women to ask the big questions relating to feminism at the time. The congress has been utilized by a number of feminist and pacifist events since 1878. A few groups that participated in the early conferences were The International Council of Women (ICW), The International Alliance of Women (IAW) and The Women's International League for Peace and Freedom (WILPF).

Heloise Brainerd was an American activist and a proponent of Latin American women's participation in the peace movement. Brainerd worked at the Pan American Union from 1909 to 1935 and then Women's International League for Peace and Freedom's US section. She received several international awards, including the Medal of Public Instruction from Venezuela and the Order of Merit from Ecuador.

Women at the Hague was an International Congress of Women conference held at The Hague, Netherlands in April 1915. It had over 1,100 delegates and it established an International Committee of Women for Permanent Peace (ICWPP) with Jane Addams as president. It led to the creation of the Women's International League for Peace and Freedom (WILPF).

Denison House was a woman-run settlement house in Boston's old South Cove neighborhood. Founded in 1892 by the College Settlements Association, it provided a variety of social and educational services to neighborhood residents, most of whom were immigrants. Several notable women worked there, including Nobel Prize winner Emily Greene Balch, labor organizer Mary Kenney O'Sullivan, and pioneering aviator Amelia Earhart. The original site at 93 Tyler Street is a stop on the Boston Women's Heritage Trail.

Helena Dudley was an American social worker, labor organizer, and pacifist. As director of Denison House in Boston from 1893 to 1912, she was an influential leader in the early settlement movement, and aided thousands of poor and working-class immigrants at a time when government relief programs were lacking. Appalled by the working conditions in local sweatshops, which she learned of through her settlement house neighbors, she became increasingly active in the labor movement. She helped organize the Women's Trade Union League in 1903, and supported the Bread and Roses strike in 1912. After World War I she worked to promote the League of Nations, and for many years she was a leading member of the Women's International League for Peace and Freedom. 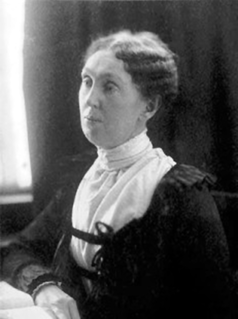 Lucia Ames Mead was an American pacifist, feminist, writer, and educator based in Boston, Massachusetts. 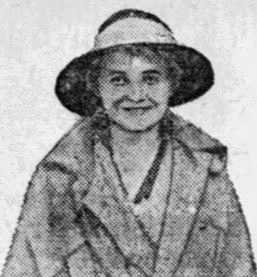 Gertrud Baer (1890–1981) was a German Jewish women's rights and peace activist. One of the founding members of the Women's International League for Peace and Freedom, she served as the executive secretary of the German branch of WILPF beginning in 1921 and co-chair of the international organization from 1929 to 1947. Throughout World War II, though leadership was shared, Baer was the primary leader of the organization. At the end of the war, she became the first WILPF consultant to the United Nations and held that post until 1972.

Clara Ragaz was one of the most noted Swiss feminist pacifists of the first half of the twentieth century. She was a founder of the Swiss Federation of Abstinent Women, an organization that supported the temperance movement in Switzerland. She served as the co-International chair of the Women's International League for Peace and Freedom (WILPF) from 1929 to 1946.

Ellen Starr Brinton was a pacifist, human rights activist and archivist from the United States. She represented the Women's International League for Peace and Freedom (WILPF) both locally and internationally and was known for her lectures about her working travels abroad and on the subject of peace. Brinton was the first curator of the Jane Addams Peace Collection which later became the Swarthmore College Peace Collection (SCPC). Brinton was a Quaker and a feminist.

Cornelia Ramondt-Hirschmann was a Dutch teacher, feminist, pacifist and theosophist active in the first half of the twentieth century. She was one of the women who participated in the push by pacifist feminists during World War I for world leaders to develop a mediating body to work for peace. The culmination of their efforts would be the achievement of the League of Nations when the war ended. Between 1935 and 1937, she served as one of the three international co-chairs of the Women's International League for Peace and Freedom (WILPF). 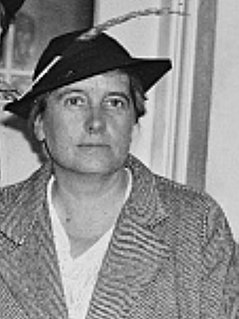 Mien van Wulfften Palthe was a Dutch feminist and pacifist. As a member of the Vereeniging voor Vrouwenkiesrecht and Women's International League for Peace and Freedom, she strove to secure enfranchisement for women and worked as an advocate peace.