Emmanuel Philibert (in Italian : Emanuele Filiberto or Testa di ferro, Piedmontese : Testa 'd fer, "Ironhead", because of his military career; 8 July 1528 – 30 August 1580) was Duke of Savoy from 1553 to 1580. He is remembered for the Italianization of the House of Savoy, as he recovered the savoyard state (invaded and occupied by France when he was a child) following the Battle of St. Quentin (1557) and subsequently moved the capital to Turin and made Italian the official language in Piedmont.

Born in Chambéry, Emmanuel Philibert was the only child of Charles III, Duke of Savoy, and Beatrice of Portugal to reach adulthood. His mother was sister-in-law to Charles V, Holy Roman Emperor, and the future duke served in Charles's army during the war against Francis I of France, distinguishing himself by capturing Hesdin in July 1553. A month later, he became Duke of Savoy on the death of his father, but this was a nearly empty honour, as the vast majority of his hereditary lands had been occupied and administered by the French since 1536. Instead, he continued to serve the Habsburgs in hopes of recovering his lands, and served his cousin Philip II of Spain as Governor of the Netherlands from 1555 to 1559. [1]

In this capacity, he personally led the Spanish invasion of northern France and won a brilliant victory at Saint-Quentin on 10 August 1557. [2] He was also a suitor to Lady Elizabeth Tudor, daughter of Henry VIII of England. With the Peace of Cateau Cambrésis between France and Spain signed in 1559, the duchy was restored to Emmanuel Philibert and he married his first cousin once removed, Margaret of France, Duchess of Berry, the sister of King Henry II of France. [3] Their only child was Charles Emmanuel I of Savoy.

Following the death of his uncle, Henry I of Portugal, on 31 January 1580, Emmanuel Philibert fought to impose his rights as a claimant to the Portuguese throne. However, he soon realised that he had quite a fragile position due to the claims of Philip II, who gained control of the country, thus uniting Spain and Portugal.

Emmanuel Philibert spent his rule regaining what had been lost in the costly wars with France. A skilled political strategist, he took advantage of various squabbles in Europe to slowly regain territory from both the French and the Spanish, including the city of Turin. He also purchased two territories. Internally, he moved the capital of the duchy from Chambéry to Turin and replaced Latin as the duchy's official language with Italian. He was attempting to acquire the marquisate of Saluzzo when he died in Turin. [4] Later, he was buried in the Chapel of the Holy Shroud of the Turin Cathedral, to which he had moved the Sindone in 1578. 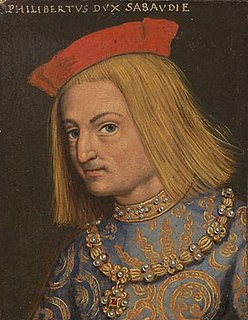 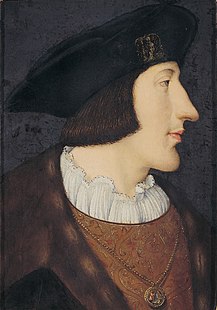 Charles III of Savoy, often called Charles the Good, was Duke of Savoy from 1504 to 1553, although most of his lands were ruled by the French between 1536 and his death.

The House of Savoy is a royal dynasty that was established in 1003 in the historical Savoy region. Through gradual expansion, the family grew in power from ruling a small Alpine county north-west of Italy to absolute rule of the Kingdom of Sicily in 1713 to 1720, when they were handed the island of Sardinia, over which they would exercise direct rule from then onward. 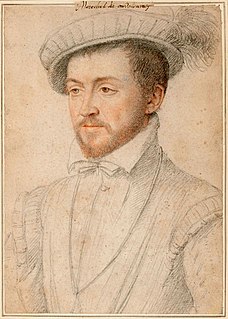 François de Montmorency, Duc de Montmorency was a French soldier, diplomat and peer who served as governor of Paris. He was Duke of Montmorency, Count of Dammartin, Baron of Châteaubriant and Lord of L'Isle-Adam, Grand Master of France, and Marshal of France. 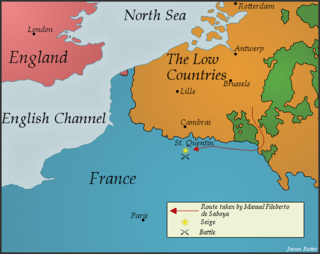 Infanta Beatrice of Portugal was a Portuguese princess by birth and Duchess of Savoy by marriage to Charles III, Duke of Savoy. She was the Sovereign Countess of Asti from 1531 to 1538. 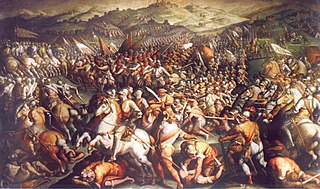 Eugene Maurice of Savoy was a Franco-Italian nobleman and general. A count of Soissons, he was the father of imperial field-marshal Prince Eugene of Savoy.

Louis Gonzaga, Duke of Nevers was an Italian-French dignitary and diplomat in France.

Charles II of Lalaing was Count of Lalaing, Lord of Escornaix and stadtholder of the County of Hainaut.

Marcantonio Bobba was an Italian Roman Catholic Bishop of Aosta, Italy and cardinal.

The Franco-Savoyard War of 1600-1601 was an armed conflict between the Kingdom of France, led by Henry IV, and the Duchy of Savoy, led by Charles Emmanuel I. The war was fought to determine the fate of the former Marquisate of Saluzzo, and ended with the Treaty of Lyon which was favorable to France.

Jacqueline de Montbel d'Entremont was a French courtier, possible artistic muse and huguenot, known for her experiences during the French wars of religion. After her first husband's death, she converted to Protestantism and married Gaspard II de Coligny, who was later killed in the St. Bartholomew's Day Massacre.