Tenmu was the youngest son of Emperor Jomei and Empress Kōgyoku, and the younger brother of the Emperor Tenji. His name at birth was Prince Ōama (大海人皇子:Ōama no ōji). He was succeeded by Empress Jitō, who was both his niece and his wife. During the reign of his elder brother, Emperor Tenji, Tenmu was forced to marry several of Tenji's daughters because Tenji thought those marriages would help to strengthen political ties between the two brothers. The nieces he married included Princess Unonosarara, today known as Empress Jitō, and Princess Ōta. Tenmu also had other consorts whose fathers were influential courtiers.

Tenmu had many children, including his crown prince Kusakabe by Princess Unonosarara; Princess Tōchi; Prince Ōtsu and Princess Ōku by Princess Ōta (whose father also was Tenji); and Prince Toneri, the editor of the Nihon Shoki and father of Emperor Junnin. Through Prince Kusakabe, Tenmu had two emperors and two empresses among his descendants. Empress Kōken was the last of these imperial rulers from his lineage.

Emperor Tenmu is the first monarch of Japan, to whom the title Tennō (Emperor of Japan) was assigned contemporaneously—not only by later generations. [4]

The only document on his life was Nihon Shoki. However, it was edited by his son, Prince Toneri, and the work was written during the reigns of his wife and children, causing one to suspect its accuracy and impartiality. He is also mentioned briefly in the preface to the Kojiki , being hailed as the emperor to have commissioned them.

Tenmu's father died while he was young, and he grew up mainly under the guidance of Empress Saimei. He was not expected to gain the throne, because his brother Tenji was the crown prince, being the older son of their mother, the reigning empress.

During the Tenji period, Tenmu was appointed his crown prince. This was because Tenji had no appropriate heir among his sons at that time, as none of their mothers was of a rank high enough to give the necessary political support. Tenji was suspicious that Tenmu might be so ambitious as to attempt to take the throne, and felt the necessity to strengthen his position through politically advantageous marriages.

Tenji was particularly active in improving the military institutions which had been established during the Taika reforms. [5]

In his old age, Tenji had a son, Prince Ōtomo, by a low-ranking consort. Since Ōtomo had weak political support from his maternal relatives, the general wisdom of the time [6] held that it was not a good idea for him to ascend to the throne, yet Tenji was obsessed with the idea.

In 671 Tenmu felt himself to be in danger and volunteered to resign the office of crown prince to become a monk. He moved to the mountains in Yoshino, Yamato Province (now Yoshino, Nara), officially for reasons of seclusion. He took with him his sons and one of his wives, Princess Unonosarara, a daughter of Tenji. However, he left all his other consorts at the capital, Omikyō in Ōmi Province (today in Ōtsu).

A year later, (in 672) Tenji died and Prince Ōtomo ascended to the throne as Emperor Kōbun. Tenmu assembled an army and marched from Yoshino to the east, to attack the capital of Omikyō in a counterclockwise movement. They marched through Yamato, Iga and Mino Provinces to threaten Omikyō in the adjacent province. The army of Tenmu and the army of the young Emperor Kōbun fought in the northwestern part of Mino (nowadays Sekigahara, Gifu), an incident known as the Jinshin War. Tenmu's army won and Kōbun committed suicide.

Pre-Meiji chronology
Prior to the 19th century, Otomo was understood to have been a mere interloper, a pretender, an anomaly; and therefore, if that commonly accepted understanding were to have been valid, then it would have followed:

As might be expected, Emperor Tenmu was no less active than former-Emperor Tenji in improving the Taika military institutions. Tenmu's reign brought many changes, such as: (1) a centralized war department was organized; (2) the defenses of the Inner Country near the Capital were strengthened; (3) forts and castles were built near Capital and in the western parts of Honshū—and in Kyushu; (4) troops were reviewed; and all provincial governors were ordered to complete the collection of arms and to study tactics. [9]

In 673 Tenmu moved the capital back to Yamato on the Kiymihara plain, naming his new capital Asuka. The Man'yōshū includes a poem written after the Jinshin War ended:

Our Sovereign, a god,

Has made his Imperial City [10]
Out of the stretch of swamps,
Where chestnut horses sank
To their bellies.

At Asuka, Emperor Tenmu was enthroned. He elevated Unonosarara to be his empress. Events of his reign include:

Tenmu reigned from this capital until his death in 686. His wife, Empress Jito became the emperor until their son became the 42nd Emperor. [14] The actual site of his grave is known. [1] This emperor is traditionally venerated at a memorial shrine (misasagi) in Nara Prefecture. The Imperial Household Agency designates this location as Tenmu's mausoleum. It is formally named Hinokuma no Ōuchi no misasagi. [15]

In 675 Emperor Tenmu banned the consumption of domesticated animal meat (horse, cattle, dogs, monkeys, birds), from April 1 to September 30 each year, due to the influence of Buddhism. [16] Wild game meat was exempt.

In the Nihon Shoki, Tenmu is described as a great innovator, but the neutrality of this description is doubtful, since the work was written under the control of his descendants. It seems clear, however, that Tenmu strengthened the power of the emperor and appointed his sons to the highest offices of his government, reducing the traditional influence of powerful clans such as the Ōtomo and Soga clans. He renewed the system of kabane , the hereditary titles of duty and rank, but with alterations, including the abolition of some titles. Omi and Muraji, the highest kabane in the earlier period, were reduced in value in the new hierarchy, which consisted of eight kinds of kabane. Each clan received a new kabane according to its closeness to the imperial bloodline and its loyalty to Tenmu.

Tenmu attempted to keep a balance of power among his sons. Once he traveled to Yoshino together with his sons, and there had them swear to cooperate and not to make war on each other. This turned out to be ineffective: one of his sons, Prince Ōtsu, was later executed for treason after the death of Tenmu.

Tenmu's foreign policy favored the Korean kingdom Silla, which took over the entire Korean peninsula in 676. After the unification of Korea by Silla, Tenmu decided to break diplomatic relations with the Tang dynasty of China, evidently in order to keep on good terms with Silla. [17]

Tenmu used religious structures to increase the authority of the imperial throne. During his reign there was increased emphasis on the tie between the imperial household and Ise Grand Shrine (dedicated to the ancestor goddess of the emperors, Amaterasu) by sending his daughter Princess Ōku as the newly established Saiō of the shrine, and several festivals were financed from the national budget. He also showed favor to Buddhism, and built several large temples and monasteries. It is said that Tenmu asked that each household was encouraged to build an altar with a dais where a Buddha-image and a sutra could be placed so that family worshiping could be held, thus inventing the butsudan. On the other hand, all Buddhist priests, monks and nuns were controlled by the state, and no one was allowed to become a monk without the state's permission. This was aimed at preventing cults and stopping farmers from turning into priests.

Kugyō (公卿) is a collective term for the very few most powerful men attached to the court of the Emperor of Japan in pre-Meiji eras.

In general, this elite group included only three to four men at a time. These were hereditary courtiers whose experience and background would have brought them to the pinnacle of a life's career. During Tenmu's reign, this apex of the Daijō-kan included:

The years of Tenmu's reign were marked by only one era name or nengō, which was proclaimed in the final months of the emperor's life; and Shuchō ended with Tenmu's death. [19]

The early years of Tenmu's reign are not linked by scholars to any era or nengō. [19] The Taika era innovation of naming time periods – nengō – was discontinued during these years, but it was reestablished briefly in 686. The use of nengō languished yet again after Tenmu's death until Emperor Monmu reasserted an imperial right by proclaiming the commencement of Taihō in 701.

In this context, Brown and Ishida's translation of Gukanshō offers an explanation about the years of Empress Jitō's reign which muddies a sense of easy clarity in the pre-Taihō time-frame:

Emperor Yōmei was the 31st Emperor of Japan, according to the traditional order of succession.

Emperor Sushun was the 32nd Emperor of Japan, according to the traditional order of succession. 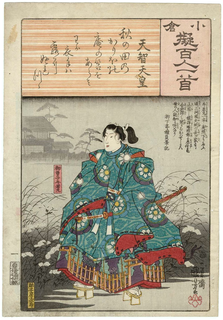 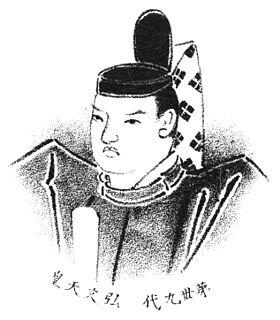 Emperor Kōbun was the 39th emperor of Japan, according to the traditional order of succession. 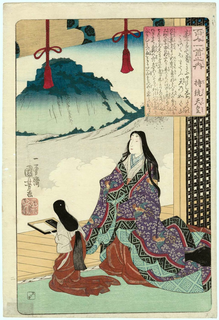 Empress Jitō was the 41st monarch of Japan, according to the traditional order of succession.

Emperor Monmu was the 42nd emperor of Japan, according to the traditional order of succession.

Emperor Kōnin was the 49th emperor of Japan, according to the traditional order of succession. Kōnin's reign lasted from 770 to 781. 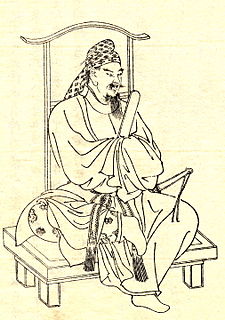 Fujiwara no Kamatari was a Japanese statesman, courtier and politician during the Asuka period (538–710). Kamatari was born to the Nakatomi clan and became the founder of the Fujiwara clan. He, along with the Mononobe clan, was a supporter of Shinto and fought the introduction of Buddhism to Japan. The Soga clan, defenders of Buddhism in the Asuka period, defeated Kamatari and the Mononobe clan and Buddhism became the dominant religion of the imperial court. Kamatari, along with Prince Naka no Ōe, later Emperor Tenji (626–672), launched the Taika Reform of 645, which centralized and strengthened the central government. Just before his death he received the honorific of Taishōkan and the surname Fujiwara from the Emperor Tenji, thus establishing the Fujiwara clan.

Prince Kusakabe was a Japanese imperial crown prince from 681 until his death. He was the second son of Emperor Tenmu. His mother was the empress Unonosarara, today known as Empress Jitō.

Empress Genmei, also known as Empress Genmyō, was the 43rd monarch of Japan, according to the traditional order of succession.

The Saimei period is a chronological timeframe during the Asuka period of Japanese history. The Saimei period describes a span of years which were considered to have begun in the 1315th year of the Yamato dynasty.

The Kōbun period is a chronological timeframe during the Asuka period of Japanese history. The Kōbun period describes a span of years which were considered to have begun in the 1332nd year of the Yamato dynasty.

The Temmu period is a chronological timeframe during the Asuka period of Japanese history. The Temmu period describes a span of years which were considered to have begun in the 1333rd year of the Yamato dynasty.

The Jitō period is a chronological timeframe during the Asuka period of Japanese history. The Jitō period describes a span of years which were considered to have begun in the 1347th year of the Yamato dynasty.

The Monmu period is a chronological timeframe during the Asuka period of Japanese history. The Mommu period describes a span of years which were considered to have begun in the 1357th year of the Yamato dynasty.