Northern Zhou had nine empresses in its history (although the first two used the alternative title of "Heavenly Princess" (天王后, Tian Wanghou)), five of whom were the wives of emperors:

The Northern Zhou followed the Western Wei, and ruled northern China from 557 to 581 AD. The last of the Northern Dynasties of China's Northern and Southern dynasties period, it was eventually overthrown by the Sui Dynasty. Like the preceding Western and Northern Wei dynasties, the Northern Zhou were members of the Tuoba clan of the Xianbei.

Further, Emperor Xuan, after he had become retired emperor, created four of his concubines empresses as well, in contravention to the convention of having only the emperor's wife being empress:

Emperor Yuan of Han was an emperor of the Chinese Han Dynasty. He reigned from 48 to 33 BC. Emperor Yuan was remembered for the promotion of Confucianism as the official creed of Chinese government. He appointed Confucius adherents to important government posts.

Xu Pingjun (許平君), formally Empress Gong'ai (恭哀皇后) and sometimes Empress Xiaoxuan (孝宣皇后) was an empress during Han Dynasty. She was the first wife of Emperor Xuan who was murdered by poisoning—by Huo Guang's wife Xian (顯), presumably at a young age. She was also the mother of Emperor Yuan.

Empress Deng Mengnü (鄧猛女), also briefly known as Liang Mengnü (梁猛女) then as Bo Mengnü (薄猛女), was an empress during Han Dynasty. She was the second wife of Emperor Huan. 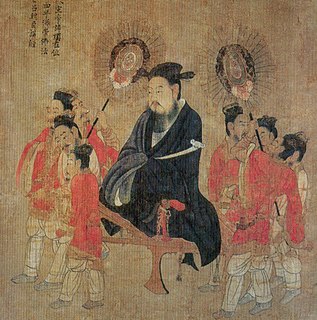 Emperor Xuan of Chen (陳宣帝) (530–582), personal name Chen Xu (陳頊), courtesy name Shaoshi (紹世), nickname Shili (師利), was an emperor of the Chen dynasty of China. He seized the throne from his nephew Emperor Fei in 569 and subsequently ruled the state for 13 years. He was considered to be a capable and diligent ruler, who at one point militarily expanded at the expense of Northern Qi. After Northern Qi fell to Northern Zhou in 577, however, Chen was cornered, and soon lost the gains it had previously made against Northern Qi. Emperor Xuan died in 582, leaving the state in the hands of his incompetent son Chen Shubao, and by 589, Chen would be destroyed by Northern Zhou's successor state Sui dynasty.

Sima Lingji was, briefly, an empress of the Chinese/Xianbei dynasty Northern Zhou. Her husband was Emperor Jing, the final emperor of the dynasty.

Yang Yong, nickname Xiandifa (睍地伐), also known by his posthumous title of Prince of Fangling (房陵王), was a crown prince of the Chinese Sui dynasty. He was the oldest son of Emperor Wen and Empress Dugu. He drew ire from his parents for wastefulness and having many concubines, while his younger brother, Yang Guang, whom Emperor Wen and Empress Dugu thought lacked these faults, was favored by them. In 600, Emperor Wen deposed Yang Yong and replaced him with Yang Guang. Subsequently, after Emperor Wen died in 604, Yang Guang had Yang Yong put to death.

Empress Yuan may refer to: