The Communist Party of China (CPC) is the founding and ruling political party of the People's Republic of China. The Communist Party is the sole governing party within mainland China, permitting only eight other, subordinated parties to co-exist, those making up the United Front. It was founded in 1921, chiefly by Chen Duxiu and Li Dazhao. The party grew quickly, and by 1949 it had driven the nationalist Kuomintang (KMT) government from mainland China after the Chinese Civil War, leading to the establishment of the People's Republic of China. It also controls the world's largest armed forces, the People's Liberation Army. 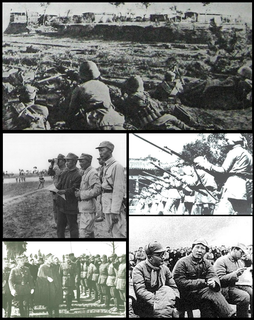 The Chinese Civil War was a civil war in China fought between the Kuomintang (KMT)-led government of the Republic of China (ROC) and the Communist Party of China (CPC) lasting intermittently between 1927 and 1949. Although particular attention is paid to the four years of fighting from 1945 to 1949, the war actually started in August 1927, after the KMT-CPC Alliance collapsed during the Northern Expedition. The conflict took place in two stages, the first between 1927 and 1937, and the second from 1946 to 1950; the Second Sino-Japanese War from 1937 to 1945 was an interlude in which the two sides were united against the forces of Japan. The Civil War resulted in a major revolution in China, with the Communists gaining control of mainland China and establishing the People's Republic of China (PRC) in 1949, forcing the Republic of China to retreat to Taiwan. A lasting political and military standoff between the two sides of the Taiwan Strait ensued, with the ROC in Taiwan and the PRC in mainland China both officially claiming to be the legitimate government of all China.

Formulated by German advisors Hans von Seeckt and Alexander von Falkenhausen, the campaigns were launched between the late 1920s to the mid-1930s with the goal of isolating and destroying the developing Chinese Red Army. The Nationalist forces launched encirclement campaigns against Communist bases in several separate locations across China. [1]

Johannes "Hans" Friedrich Leopold von Seeckt was a German military officer who served as Chief of Staff to August von Mackensen and was a central figure in planning the victories Mackensen achieved for Germany in the east during the First World War.

Alexander Ernst Alfred Hermann Freiherr von Falkenhausen was a German General and military advisor to Chiang Kai-shek. He was an important figure during the Sino-German cooperation to reform the Chinese Army. In 1938 Germany, under pressure from Japan, ended its support for China and Falkenhausen was forced to withdraw from China. Back in Europe, he later became the head of the military government of Belgium from 1940–44 during its German occupation. 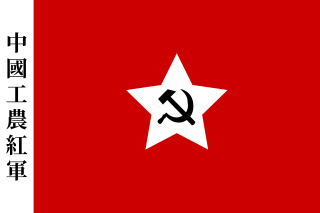 The Chinese Workers' and Peasants' Red Army or Chinese Workers' and Peasants' Revolutionary Army, renamed Chinese People's Red Army in 1936, commonly known as the Chinese Red Army or simply the Red Army, was the armed forces of the Communist Party of China from 1928 to 1937. The Red Army was incorporated into the National Revolutionary Army as part of the Second United Front with the Kuomintang to fight against the Japanese during the Second Sino-Japanese War of 1937. In the later stages of the Chinese Civil War, they were renamed the People's Liberation Army. 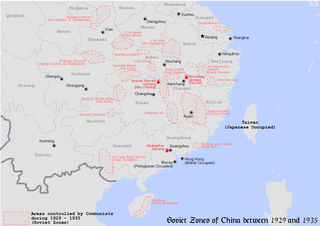 The first four Encirclement campaigns of the Chinese Nationalists military were unsuccessful. However, with the rise of Adolf Hitler in Germany in 1933, and the subsequent close cooperation between Nazi Germany and the Republic of China, the nationalists succeeded in the final 5th campaign which led directly to the famous Long March of the Communist Red Armies.

The Fourth Encirclement Campaign is an abbreviated name used for several different encirclement campaigns launched by the Nationalist Government with the goal of destroying the developing Chinese Red Army and its communist bases. The battles took place in several separate locations in China during the early stage of Chinese Civil War, between the late 1920s to mid-1930s. These are:

The genus Helwingia consists of shrubs native to eastern Asia, the Himalayas, and northern Indochina. It is the only genus in the family Helwingiaceae.

Eupoecilia ambiguella, the vine moth, is a moth of the family Tortricidae. It is found in Europe, China, India, Japan, Korea, Mongolia and the Russian Far East.

Rhopobota naevana, the holly tortrix moth, holly leaf tier or blackheaded fireworm, is a moth of the family Tortricidae. It is found from Europe to eastern Russia, China, Taiwan, Mongolia, Korea and Japan. It is also present in India, Sri Lanka and North America. 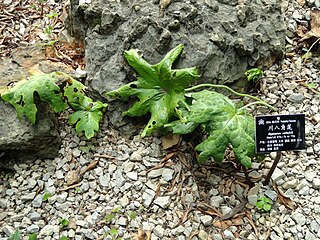 Dysosma is a group of herbaceous perennials in the Berberidaceae or barberry family described as a genus in 1928. It is native to China and Indochina.

Eupoecilia amphimnesta is a species of moth of the family Tortricidae. It is found in China, Taiwan, India, Japan, Korea, Mongolia, Russia and Europe.

Spilarctia subcarnea is a moth in the family Erebidae. It was described by Francis Walker in 1855. It is found in Nepal, China, the Russian Far East, Korea, Japan and Taiwan.

Schnabelia is a genus of plants in the family Lamiaceae, first described in 1921. The entire genus is endemic to China.

Mosla is a genus of plants in the family Lamiaceae, first described as a genus in 1875. It is native to eastern Asia, the Himalayas, and southeastern Asia.

Scoparia congestalis is a moth in the family Crambidae. It was described by Francis Walker in 1859. It is found in Japan, Sri Lanka, Taiwan, Korea, Pakistan, Russia and China.