Endeavour Piedmont Glacier is a piedmont glacier, 6 nautical miles (11 km; 7 mi) long and 2 nautical miles (4 km; 2 mi) wide, between the southwest part of Mount Bird and Micou Point, Ross Island. In association with the names of expedition ships grouped on this island, it was named after HMNZS Endeavour, a tanker/supply ship which for at least 10 seasons, 1962–63 to 1971–72, transported bulk petroleum products and cargo to Scott Base and McMurdo Station on Ross Island. [1] 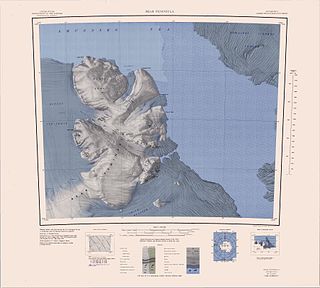 Falkner Glacier, is an east-flowing valley glacier, 4 nautical miles long, located 2 nautical miles south of Oakley Glacier in the Mountaineer Range, Victoria Land, Antarctica. The glacier descends steeply to Lady Newnes Bay where it forms a floating glacier tongue. It was named by the Advisory Committee on Antarctic Names (2008) after Kelly K. Falkner, Professor of Chemical Oceanography at Oregon State University, who served from 2006 as the first Program Director for the Antarctic Integrated System Science Program in the Division of Antarctic Sciences, Office of Antarctic Programs, National Science Foundation.

Wohlschlag Bay is a large bay indenting the west side of Ross Island between Harrison Bluff and Cape Royds. Charted by the Discovery Expedition under Scott, 1901-04. Named by the Advisory Committee on Antarctic Names (US-ACAN) in 1964 for Donald E. Wohlschlag, professor of biology at Stanford University, who outfitted the biology laboratories on the USNS Eltanin and at McMurdo Station, where he worked five summer seasons from 1958-64.

Ball Stream is a meltwater stream 2 nautical miles (4 km) west of Marble Point on the coast of Victoria Land. It issues from the front of Wilson Piedmont Glacier and flows northeast to Surko Stream just west of where the latter enters Arnold Cove. The stream was studied by Robert L. Nichols, a geologist for Metcalf and Eddy, Engineers, Boston, MA, who made engineering studies here under contract to the U.S. Navy in the 1957–58 season, and was named by Nichols for Donald G. Ball, a soil physicist with Metcalf and Eddy.

Beeby Peak is a peak 2.4 nautical miles (4.4 km) east-northeast of the summit of Mount Bird in northwest Ross Island, that rises to about 1,400 metres (4,600 ft). It was named by the New Zealand Geographic Board in 2000 after Chris Beeby.

The Boulder Cones are volcanic cones 0.9 nautical miles (1.7 km) southwest of Castle Rock on Hut Point Peninsula, Ross Island. The name, which is descriptive, was given by Frank Debenham of the British Antarctic Expedition, 1910–13, who made a plane table survey of the peninsula in 1912.

Waipuke Beach is a beach between McDonald and Caughley Beaches, lying 6 nautical miles (11 km) southwest of Cape Bird on Ross Island. So named by the New Zealand Geological Survey Antarctic Expedition (NZGSAE), 1958–59, because of periodic flooding by meltwater from the Cape Bird icecap, which has been destructive to nearby penguin rookeries. Waipuke is the Maori word for flood.

The Krall Crags are two rock summits rising to over 1,400 metres (4,600 ft) on the northwestern slope of Mount Erebus, Ross Island, Antarctica. The feature is 1.2 nautical miles (2.2 km) west-northwest of Abbott Peak. The crags were named by the Advisory Committee on Antarctic Names (2000), at the suggestion of P.R. Kyle, after Sarah Krall who worked for more than over 10 years in providing support to science in Antarctica. She was cook and camp manager at the Lower Erebus Hut during the 1992–93 National Science Foundation – NASA Dante robot experiment on Mount Erebus; she also managed the food room at McMurdo Station, was the hovercraft pilot, and has also been a helicopter technician.

Dunlop Island is a rocky island, one nautical mile (2 km) long, lying just off the Wilson Piedmont Glacier and the coast of Victoria Land, close northeast of Cape Dunlop. It was first mapped by the British Antarctic Expedition, 1907–09, under Ernest Shackleton, who named it for H.J.L. Dunlop, chief engineer of the ship Nimrod.

Glacier Ridge is a broad north–south ridge, 4.5 nautical miles (8 km) long and 0.8 nautical miles (1.5 km) wide, on the southern slopes of Mount Erebus, Ross Island, Antarctica. Completely ice-covered, the ridge descends from about 2,200 metres (7,200 ft) to 600 metres (2,000 ft), terminating 2.1 nautical miles (3.9 km) northwest of Tyree Head. In association with the names of expedition ships grouped on this island, it was named after the USCGC Glacier, an icebreaker which for three decades, 1955–56 to 1986–87, supported scientific activity in Antarctica and the Ross Sea on virtually an annual basis. From 1955–56, Glacier operated as a US Navy ship. Along with other Navy icebreakers, Glacier was transferred to the US Coast Guard fleet, June 1966, from which she operated until decommissioned, June 1987.

Marr Glacier is a glacier 2 nautical miles (4 km) west of Goldman Glacier, flowing north from the Kukri Hills into Taylor Valley, Victoria Land, Antarctica. It was charted by the British Antarctic Expedition under Robert Falcon Scott, 1910–13, who it appears also applied the name.

Herbertson Glacier is a small alpine glacier which drains from the cliff that forms the southern margin of New Harbour, about 5 nautical miles (10 km) west-southwest of Butter Point, Victoria Land, Antarctica. It was named by the British Antarctic Expedition, 1910–13, presumably for British geographer A.J. Herbertson of Oxford University.

Kitticarrara Glacier is a short, steep glacier 1 nautical mile (2 km) south of Howard Glacier in the Kukri Hills, flowing east-southeast into Ferrar Glacier, in Victoria Land, Antarctica. It was named by the Western Journey Party, led by Thomas Griffith Taylor, of the British Antarctic Expedition, 1910–13. The name was suggested by Frank Debenham after Kitticarrara, a sheep station in New South Wales.

Mount Terra Nova is a snow-covered mountain, 2,130 m (6,990 ft), between Mount Erebus and Mount Terror on Ross Island. It was first mapped by the Discovery expedition in 1901-04, and named for Terra Nova, the relief ship for this expedition and the British Antarctic Expedition, 1910-13.

Tazieff Rocks is a nunatak in Antarctica 0.8 nautical miles (1.5 km) southeast of Micou Point, Ross Island. It rises to c.200 m (660 ft) at the south end of Endeavour Piedmont Glacier. At the suggestion of P.R. Kyle, it is named by the Advisory Committee on Antarctic Names (US-ACAN) after Haroun Tazieff (d.), a renowned French volcanologist who worked at Mount Erebus with several groups of French scientists in three field seasons between 1973 and 1979.

Keys Hill is a hill about 1,100 metres (3,600 ft) high located at the head of Shearwater Glacier, 2.2 nautical miles (4 km) west-southwest of the summit of Mount Bird in northwestern Ross Island, Antarctica. It was named by the New Zealand Geographic Board in 2000 after Gordon Keys, a leader of long term New Zealand Antarctic Programme atmospheric research, 1985–95.