ENEOS Holdings, Inc. (ENEOSホールディングス株式会社) is a Japanese petroleum and metals conglomerate headquartered in Tokyo, Japan. In 2012 the multinational corporation consisted of 24,691 employees worldwide and, as of March 2013, JX Holdings was the forty-third largest company in the world by revenue. It is one of the core companies of the Mitsubishi Group through its predecessor (the original Nippon Oil Company)'s merger with Mitsubishi Oil.

JXTG Holdings was established on April 1, 2010, through the joint share transfer by Nippon Oil Corporation and Nippon Mining Holdings, Inc. On July 1, 2010, all the businesses of both Group Companies were integrated and reorganized under JX Holdings, resulting in the incorporation of three core business companies: [3]

Esso is a trading name for ExxonMobil and its related companies. The company began as Standard Oil of New Jersey following the breakup of Standard Oil. In 1972, the name was largely replaced in the U.S. by the Exxon brand after the company bought Humble Oil, while the Esso name remained widely used elsewhere.

Tesoro Corporation, known briefly as Andeavor, was a Fortune 100 and a Fortune Global 500 company headquartered in San Antonio, Texas, with 2017 annual revenues of $35 billion, and over 14,000 employees worldwide. Based on 2017 revenue, the company ranked No. 90 in the 2018 Fortune 500 list of the largest United States corporations by total revenue.

Total SE is a French multinational integrated oil and gas company founded in 1924 and one of the seven "supermajor" oil companies. Its businesses cover the entire oil and gas chain, from crude oil and natural gas exploration and production to power generation, transportation, refining, petroleum product marketing, and international crude oil and product trading. Total is also a large scale chemicals manufacturer.

Petroliam Nasional Berhad, commonly known as Petronas, is a Malaysian oil and gas company. Established in 1974 and wholly owned by the Government of Malaysia, the corporation is vested with the entire oil and gas resources in Malaysia and is entrusted with the responsibility of developing and adding value to these resources. Petronas is ranked among Fortune Global 500's largest corporations in the world. In the 2017 Forbes Global 2000, Petronas Gas was ranked as the 1881st largest public company in the world. 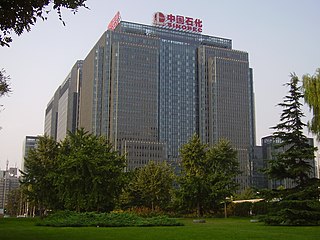 China Petroleum & Chemical Corporation (中国石油化工股份有限公司), or Sinopec, is a Chinese oil and gas enterprise based in Beijing. It is listed in Hong Kong and also trades in Shanghai and New York. KazMunayGas (KMG) is the state-owned oil and gas company of Kazakhstan. It was founded in 2002 by merging Kazakhoil and Oil and Gas Transportation.

Cosmo Oil Company, Limited is a Japanese petrochemical company. It is Japan's third-biggest refiner by sales after JX Holdings and Idemitsu Kosan.

Exxon Mobil Corporation, stylized as ExxonMobil, is an American multinational oil and gas corporation headquartered in Irving, Texas. It is the largest direct descendant of John D. Rockefeller's Standard Oil, and was formed on November 30, 1999 by the merger of Exxon and Mobil. ExxonMobil's primary brands are Exxon, Mobil, Esso, and ExxonMobil Chemical. ExxonMobil is incorporated in New Jersey.

The Idemitsu Kosan Company, Ltd. is a Japanese petroleum company. It owns and operates oil platforms, refineries, produces and sells petroleum, oils and petrochemical products, and also operates gas stations under the apollostation brand and in its own Idemitsu and Shell brands, the latter under license of Royal Dutch Shell.