Engelbrekt Church (Swedish : Engelbrektskyrkan) is a protected church located in the Lärkstaden area of Stockholm, Sweden. Its located at Östermalm and belongs to the Church of Sweden and is parish church for Engelbrekt Parish in the Diocese of Stockholm. It was designed by architect Lars Israel Wahlman in the National Romantic style and completed in 1914. It is one of the largest churches in Stockholm, with 1,400 seats. [1] [2] [3]

In the spirit of romantic nationalism, the church was named after Engelbrekt Engelbrektsson – a Swedish 15th century rebel leader and national hero. [1] It was built atop a hill in the years 1910–14, after a design competition held in 1906. [2] The rock on which the church is standing was left mostly intact, in accordance to the urban planning ideals at the time, giving it a naturally elevated position in the city. [1]

The building has some features common to Byzantine architecture and has a cruciform architectural plan with a 32 m (105 ft) high nave, [1] [2] [3] making it the highest in Scandinavia. [3] Internationally appreciated in architectural circles, the church has not been subjected to any major changes since its inauguration and is regarded as a paragon of the Swedish Art Nouveau era and the National Romantic style. [1]

The Stockholm City Hall is the building of the Municipal Council for the City of Stockholm in Sweden. It stands on the eastern tip of Kungsholmen island, next to Riddarfjärden's northern shore and facing the islands of Riddarholmen and Södermalm. It houses offices and conference rooms as well as ceremonial halls, and the luxury restaurant Stadshuskällaren. It is the venue of the Nobel Prize banquet and is one of Stockholm's major tourist attractions.

Ivar Justus Tengbom was a Swedish architect and one of the best-known representatives of the Swedish neo-classical architecture of the 1910s and 1920s.

This article covers the architecture of Sweden from a historical perspective.

Ernst Carl Westman was a Swedish architect and interior designer. He was an early adopter of the National Romantic Style, but turned later to the neo-classical style of the 1920s.

St. Paul's Episcopal Church is a parish church in the Diocese of Iowa. The church is located in Harlan, Iowa, United States. It has been listed on the National Register of Historic Places in 1978.

St Cuthbert's is an Anglican church in Lytham, Lancashire, England. It was built 1834–1835, replacing a previous church on the same site. It is an active parish church in the Diocese of Blackburn. Since 1971 it has been designated a Grade II* listed building.

St Laurence's Church stands at the corner of Chapel Street and Edward Street in Morecambe, Lancashire, England. It is a redundant church, formerly an Anglican parish church. Its benefice has been united with that of Holy Trinity, Morecambe. The former church is recorded in the National Heritage List for England as a designated Grade II listed building.

St Thomas' Church is an Anglican church in St Anne's-on-the-Sea, a town on the Fylde coastal plain in Lancashire, England. It is an active parish church in the Diocese of Blackburn and the archdeaconry of Lancaster. Designed by Austin and Paley, it is recorded in the National Heritage List for England as a designated Grade II listed building.

St Mary's Church is located to the north of the village of Borwick, Lancashire, England. It is an active Anglican parish church in the deanery of Tunstall, the archdeaconry of Lancaster, and the diocese of Blackburn. Its benefice is united with those of St Oswald, Warton, and St John the Evangelist, Yealand Conyers. The church is recorded in the National Heritage List for England as a designated Grade II listed building.

Högalid Church is a protected church located in the Södermalm district of Stockholm, Sweden. It was designed by architect Ivar Tengbom. Built upon elevated ground 1916–1923, in a barren area later turned into a park, it is one of the most prominent buildings in the city, complementing the contemporary Stockholm City Hall on the opposite side of Riddarfjärden. The church is considered one of Sweden's foremost examples of the National Romantic architectural style.

Gustaf Vasa Church is a church located in the Vasastaden district of Stockholm, Sweden. Inaugurated in 1906 and named after 16th century King Gustav Vasa, it was designed by architect Agi Lindegren in the Baroque Revival style. Situated between two busy avenues partially lined with trees, its dome rises 60 metres (200 ft) above the nearby Odenplan plaza. The floor plan is in the shape of a Greek cross and seats 1,200 people, making it one of the largest churches in Stockholm.

Oscar's Church is one of the major churches in Stockholm, Sweden. The three-aisled hall church, which holds 1,200 people, has an 80-metre-high (260 ft) tower in the south-western part of the building. Oscar's Church is located in the south-eastern part of Östermalm, where Storgatan and Narvavägen meet, near the Swedish History Museum. Narvavägen is together with the nearby Strandvägen—from which the church is also visible—one of the city's main boulevards, lined with several residential palaces.

St. John's Church is a church located near Triangeln in the Innerstaden district of Malmö, Sweden. It was designed by Axel Anderberg in the Jugend style and built in 1903-1907.

Holy Trinity Church is in Accrington Road, Burnley, Lancashire, England. It is a redundant Anglican parish church, and is recorded in the National Heritage List for England as a designated Grade II listed building. Holy Trinity is a Commissioners' church designed by Lewis Vulliamy in Early English style. The church was extended in 1871–72, but closed in 1990, and has been converted into flats.

St. Mark's Church is a church located in St. Mark's Parish in Aarhus, Denmark. The church is located in the Midtbyen neighbourhood. It is a parish church within the Church of Denmark servicing a parish population of 8.873 (2015). The church was designed by the Danish architect Thomas Havning who won a public contest for a new church design in 1933. The parish of the Church of Our Lady was reaching a population of 10.000 and it had been decided to split it and create a new parish, requiring a new church. Construction began in 1934 and was completed in October, 1935. The church is dedicated to Mark the Evangelist. In 1982 a new wing, Klostergården, was added to the church with an office and recreational facilities for youth preparing for confirmation. In 1998 the church was extensively renovated. 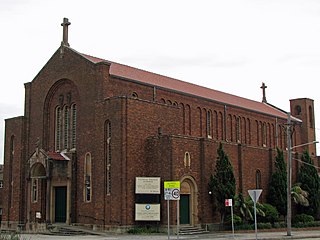 St Anne's Church is a heritage-listed Roman Catholic church located at 60 Blair Street, North Bondi, Waverley Municipality, New South Wales, Australia. The church was designed by Joseph Fowell and Kenneth McConnel, and built from 1934 to 1964 by R. M. Bowcock. It is also known as St. Anne's Church and St Anne's Shrine. The property is owned by The Sisters of Mercy and it was added to the New South Wales State Heritage Register on 26 May 2006. 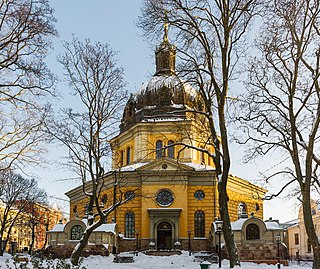 Hedvig Eleonora Parish is a parish in Östermalm's church district (kontrakt) in the Diocese of Stockholm, Sweden. The parish is located in Stockholm Municipality in Stockholm County. The parish forms its own pastorship.

Engelbrekt Parish is a parish in Östermalm's church district (kontrakt) in the Diocese of Stockholm, Sweden. The parish is located in Stockholm Municipality in Stockholm County. The parish forms its own pastorship.