Engelskbukta (English: English Bay) is a broad, open bay mid-way up the west coast of the Norwegian island of Jan Mayen. It lies between Kapp Rudsen and Kvalrossen, comprising Kvalrossbukta and Tømmerbukta. Presumably this is where the English resorted to in 1616, when they sent their first whaling ships to the island. The Dutch whalers called it Noordbaai (North Bay) and used it for one of their two main whaling stations. In 1632 two Basque whaling ships plundered the station, causing the Dutch to send a wintering party of seven men in 1633–34. All perished. 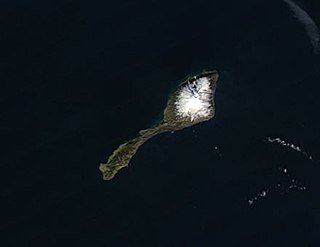 Spitsbergen is the largest and only permanently populated island of the Svalbard archipelago in northern Norway. 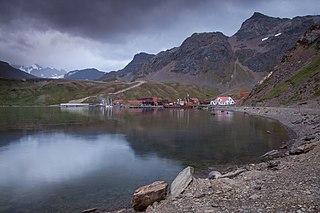 Grytviken was the largest whaling station on South Georgia, part of the British Overseas Territory of South Georgia and the South Sandwich Islands in the South Atlantic. The settlement, which is located at the head of King Edward Cove within the larger Cumberland East Bay, was considered the best harbour on South Georgia Island. It was founded on November 16, 1904, by Carl Anton Larsen of Sandefjord, Norway. 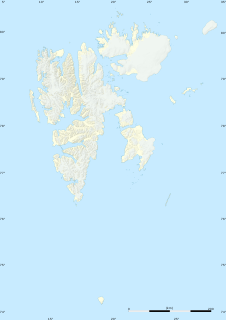 Smeerenburg was a whaling settlement on Amsterdam Island in northwest Svalbard. It was founded by the Danish and Dutch in 1619 as one of Europe's northernmost outposts. With the local bowhead whale population soon decimated and whaling developed into a pelagic industry, Smeerenburg was abandoned about 1660.

The polar archipelago of Svalbard was first discovered by Willem Barentsz in 1596, although there is disputed evidence of use by Pomors or Norsemen. Whaling for bowhead whales started in 1611, dominated by English and Dutch companies, though other countries participated. At that time there was no agreement about sovereignty. Whaling stations, the largest being Smeerenburg, were built during the 17th century, but gradually whaling decreased. Hunting was carried out from the 17th century by Pomors, but from the 19th century it became more dominated by Norwegians. 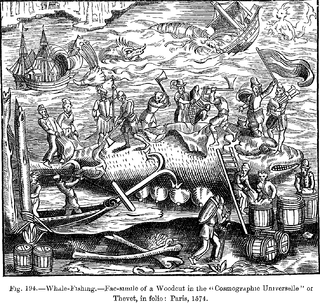 This article discusses the history of whaling from prehistoric times up to the commencement of the International Whaling Commission (IWC) moratorium on commercial whaling in 1986. Whaling has been an important subsistence and economic activity in multiple regions throughout human history. Commercial whaling dramatically reduced in importance during the 19th century due to the development of alternatives to whale oil for lighting, and the collapse in whale populations. Nevertheless, some nations continue to hunt whales even today.

A whaler or whaling ship is a specialized vessel, designed or adapted for whaling: the catching or processing of whales. 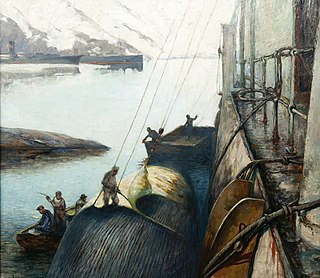 Flensing is the removing of the blubber or outer integument of whales, separating it from the animal's meat. Processing the blubber into whale oil was the key step that transformed a whale carcass into a stable, transportable commodity. It was an important part of the history of whaling. The whaling that still continues in the 21st century is both industrial and aboriginal. In aboriginal the blubber is rarely rendered into oil, although it may be eaten as muktuk. 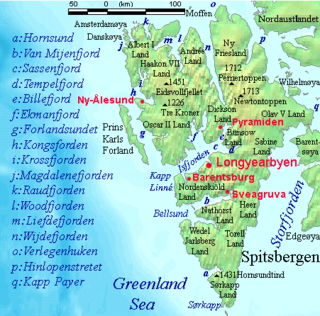 Isfjorden is the second longest fjord in the Norwegian archipelago of Svalbard. It lies on the west side of Spitsbergen, an island in the Arctic Ocean about midway between Norway and the North Pole, and the largest in the archipelago. The mountain of Alkhornet stands on the northern side of the entrance to the fjord, as does the coastal plain of Daudmannsøyra. A portion of Isfjorden is included in the national parks of Norway as Nordre Isfjorden Land National Park. Around the fjord lie many of the largest settlements in Svalbard: Barentsburg, Longyearbyen and Pyramiden. 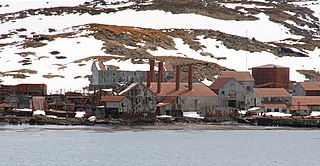 Leith Harbour, also known as Port Leith, was a whaling station on the northeast coast of South Georgia, established and operated by Christian Salvesen Ltd, Edinburgh. The station was in operation from 1909 until 1965. It was the largest of seven whaling stations, situated near the mouth of Stromness Bay. One man prominently involved in setting up Leith Harbour was William Storm Harrison. 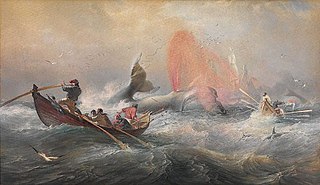 Whaling in Australian waters began in 1791 when five of the 11 ships in the Third Fleet after landing their passengers and freight at Sydney Cove then left Port Jackson to engage in whaling and seal hunting off the coast of Australia and New Zealand. The two main species hunted by such vessels in the early years were right and sperm whales. Later, humpback, bowhead and other whale species would be taken.

Point Cloates, formerly known as Cloate's Island, is a peninsula approximately 100 kilometres south south-west of North West Cape, in the Pilbara region of Western Australia. It features Point Cloates Lighthouse and the ruins of a previous lighthouse ; both buildings are on Cloates Hill, which rises 41 metres above sea level.

Ytre Norskøya is an island on the northwest coast of Spitsbergen, part of the Svalbard archipelago.

Magdalenefjorden is an 8 km long and up to 5 km wide fjord between Reuschhalvøya and Hoelhalvøya, Albert I Land, on the west coast of Spitsbergen, the largest island in the Svalbard archipelago. It is large enough to accommodate even the largest of cruise ships which are even able to turn through 180 degrees in the fjord. On the south shore of the fjord is the bay Gullybukta. 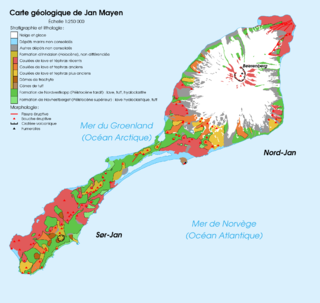 Maria Muschbukta is an open bay between Fulgeberget and Kvalrossen, on the western coast of the Norwegian island of Jan Mayen. It is named after the shipowner Maria Musch. She was a member of the Kleine Noordse Compagnie, which sent a ship to Jan Mayen in 1616 as part of early Dutch whaling. This ship was the first to use the bay to hunt whales. The name is shown on Joan Blaeu's 1662 map of the island. 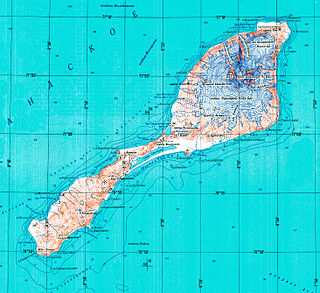 Titeltbukta is a bay on the northwestern coast of the Norwegian island of Jan Mayen. The name originates from the establishment of ten "tents", in reality wood and brick structures, as a basic whaling station. This was set up in 1624 by Dutch whalers to lodge the men who flensed the whales. The Dutch also called it Zuidbaai, in contrast to the other on the island, to the north at Engelskbukta).

Virgohamna is a small bay on the northern coast of Danes Island, an island off the northwestern coast of Spitsbergen. Spitsbergen and Danes Island are islands of the Svalbard archipelago. The bay is named after SS Virgo, the vessel of Swedish engineer and explorer Salomon August Andrée's 1896 expedition. Virgohamna is located across a small strait from Smeerenburg, a historical whaling station on Amsterdam Island about 2 km to the north.

The Basques were among the first to catch whales commercially, as opposed to aboriginal whaling, and dominated the trade for five centuries, spreading to the far corners of the North Atlantic and even reaching the South Atlantic. The French explorer Samuel de Champlain, when writing about Basque whaling in Terranova, described them as "the cleverest men at this fishing". By the early 17th century, other nations entered the trade in earnest, seeking the Basques as tutors, "for [they] were then the only people who understand whaling", lamented the English explorer Jonas Poole. 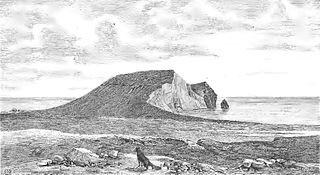