For the 1967 Darmstädter Ferienkurse Stockhausen organised a composition seminar during the two-week period preceding the courses proper, in which twelve composers from various countries each developed a composition which was a dialogue to be performed by an instrumentalist and the composer, using either a previously prepared tape of sound materials or a short-wave receiver ( Gehlhaar 1968 , 9, 45). This was the first time in the history of the Darmstadt Courses that actual composing was formally undertaken within the framework of the courses themselves ( Iddon 2004 , 87).

The participating composers were paired with the instrumentalists (eleven members of the Ensemble Hudba Dneska (Bratislava), directed by Ladislav Kupkovič, plus Aloys Kontarsky (Stockhausen 1971a , 213; Gehlhaar 1968 , 7, 39, 43, 75:

They were supplemented at the mixing consoles by:

A public dress rehearsal of the resulting collective composition was held on 28 August, and the official performance took place on 29 August 1967 in the Turnhalle (gymnasium) of the Ludwig-Georgs-Gymnasium  [ de ] (Ludwig Georg High School) in Darmstadt, and was a sufficient success to guarantee that a similar course would be held the following year. This second project would be titled Musik für ein Haus (Iddon 2004 , 87; Stockhausen 2009 , 246).

The twelve constituent composer/performer duos are scattered throughout the hall, and are coordinated according to a "process plan" composed by Stockhausen, who also composed eight inserts leading to occasional points of synchronisation. Each group is picked up on microphones and fed to four mixing consoles, controlled by additional musicians whose task is to expand certain details of sound and send them wandering around the hall over eight loudspeakers. The audience members are also free to move about the hall and choose their own acoustical perspectives ( Gehlhaar 1968 , 8, 44).

The music was therefore pluralistic, soloistic, and collective all at the same time. The inserts composed by Stockhausen were intended to unify all of the performers by verticalizing the musical events, harmonically and rhythmically. The performance was arranged to begin before the audience began to arrive, and ended with each composer-instrumentalist pair leaving the gymnasium one after another, still playing in the back of cars as they drove away, to meet again at 2:00am twenty miles away ( Cott 1973 , 205).

Darmstädter Ferienkurse is a regular summer event of contemporary classical music in Darmstadt, Hesse, Germany. It was founded in 1946, under the name Ferienkurse für Internationale Neue Musik Darmstadt, as a gathering with lectures and concerts over several summer weeks. Composers, performers, theorists and philosophers of contemporary music met first annually until 1970, and then biannually. The event is organised by Internationales Musikinstitut Darmstadt (IMD). It is regarded as a leading international forum of contemporary and experimental music with a focus on composition. The festival awards the Kranichsteiner Musikpreis for performers and young composers.

Darmstadt School refers to a group of composers who were associated with the Darmstadt International Summer Courses for New Music from the early 1950s to the early 1960s in Darmstadt, Germany, and who shared some aesthetic attitudes. Initially, this meant just four composers, Pierre Boulez, Bruno Maderna, Luigi Nono, and Karlheinz Stockhausen, but others came to be added, in various ways. The term does not refer to an educational institution. 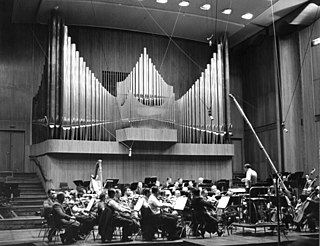 Kurzwellen, for six players with shortwave radio receivers and live electronics, is a composition by Karlheinz Stockhausen, written in 1968. It is Number 25 in the catalog of the composer’