Last updated June 28, 2022
Political coalition in France
"Citizens Together" redirects here. For the American political organization, see Citizens United.
Not to be confused with Ensemble!, a political party bearing the same name.

François Bayrou, the leader of the Democratic Movement (MoDem) has previously proposed the formation of a coalition that would include centrist and centre-right parties. In November 2021, president of the National Assembly, Richard Ferrand, accepted his proposal and together they had formed Ensemble Citoyens. Besides the Democratic Movement and La République En Marche!, Agir was also its founding member. [5] [6] [7] In the following month, they were joined by the Radical Party, Horizons, Territories of Progress, and En Commun. [8] [9]

From its foundation in November, the coalition has been headed by Ferrand as its leader, Bayrou and Édouard Philippe as vice-presidents, and Stanislas Guerini as secretary-general. [10] [11] Jean Castex has also affiliated himself with the coalition. [12] Philippe suspended its participation in the coalition on 14 January 2022, although, four days later he had announced that his party was reinstated into the coalition. [13] [14] In April, LREM announced that it would change its party name to "Renaissance", and a month later, the name of the coalition was shortened to just Ensemble. [15] [16] The Progressive Federation joined the coalition in May 2022. [17]

The coalition aimed to bring the presidential majority of Emmanuel Macron together in order to present its joint candidates for the 2022 legislative election. [5] [7] In May 2022, Ferrand indicated their commitment for "a stable majority in the National Assembly", while Philippe specified that the program of Ensemble "is that of the Macron". Bayrou indicated that the parties would form a joint parliamentary group in the National Assembly. [18] Some media sources consider it as a modern incarnation of Valéry Giscard d'Estaing's Union for French Democracy (UDF), founded in 1978. [19]

François René Jean Lucien Bayrou is a French politician who has presided over the Democratic Movement (MoDem) since he founded it in 2007. A centrist, he was a candidate in the 2002, 2007 and 2012 presidential elections. He has also presided over the European Democratic Party (EDP) since 2004.

The Democratic Movement is a centre to centre-right political party in France that is characterised by a strong pro-European stance. MoDem was founded by François Bayrou to succeed the Union for French Democracy (UDF) and contest the 2007 legislative election, after his strong showing in the 2007 presidential election. Initially named the Democratic Party, the party was renamed "Democratic Movement", because there was already a small Democratic Party in France.

Yannick Favennec Becot is a French politician of the Horizons party, within the Ensemble Citoyens coalition supporting incumbent President Emmanuel Macron, who has been serving as a member of the National Assembly since the 2002 elections, representing the Mayenne department.

Marc Fesneau is a French politician who has served as Minister of Agriculture and Food since 20 May 2022 in the government of Élisabeth Borne. A member of the Democratic Movement (MoDem), he previously represented the 1st constituency of the Loir-et-Cher department and presided over the Democratic Movement and affiliated group in the National Assembly from 2017 to 2018.

Legislative elections in France were held on 11 and 18 June 2017 to elect the 577 members of the 15th National Assembly of the Fifth Republic. They followed the two-round presidential election won by Emmanuel Macron. The centrist party he founded in 2016, La République En Marche! (LREM), led an alliance with the centrist Democratic Movement (MoDem); together, the two parties won 350 of the 577 seats—a substantial majority—in the National Assembly, including an outright majority of 308 seats for LREM. The Socialist Party (PS) was reduced to 30 seats and the Republicans (LR) reduced to 112 seats, and both parties' allies also suffered from a marked drop in support; these were the lowest-ever scores for the centre-left and centre-right in the legislative elections. The movement founded by Jean-Luc Mélenchon, la France Insoumise (FI), secured 17 seats, enough for a group in the National Assembly. Among other major parties, the French Communist Party (PCF) secured ten and the National Front (FN) obtained eight seats. Both rounds of the legislative election were marked by record low turnout. 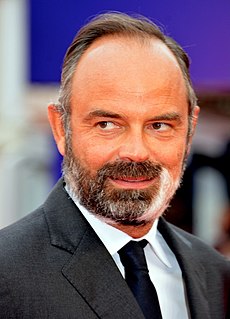 La République En Marche !, sometimes called simply En Marche ! as its original name, is a liberal political party in France. On 5 May 2022, the party changed its name to Renaissance ahead of the 2022 legislative election.

The 2022 French presidential election was held on 10 and 24 April 2022. As no candidate won a majority in the first round, a runoff was held, in which Emmanuel Macron defeated Marine Le Pen and was re-elected as President of France. Macron, from La République En Marche! (LREM), had defeated Le Pen, leader of the National Rally, once already in the 2017 French presidential election, for the term which expired on 13 May 2022. Macron became the first President of France to win a re-election bid since Jacques Chirac won in 2002. 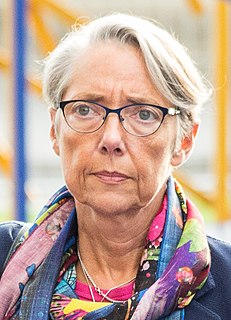 Élisabeth Borne is a French politician who has served as Prime Minister of France since May 2022.

Géraldine Bannier is a French teacher and politician who has served as Member of the National Assembly for Mayenne's 2nd constituency since 2017. She is a member of the Democratic Movement (MoDem).

Naïma Moutchou is a French lawyer and politician of La République En Marche! (LREM) who has been serving as a member of the French National Assembly since the 2017 elections, representing the department of Val-d'Oise.

Agir, officially Agir, la droite constructive, is a political party in France, established on 26 November 2017. The majority of its founding members were previously associated with the Constructive faction within the centre-right Republicans. Styling itself as a "liberal, social, European, humanist and reformist" party, Agir was founded by a group of 19 established politicians as an alternative to the Republicans.

Legislative elections in France were held on 12 and 19 June 2022 to elect the 577 members of the 16th National Assembly of the Fifth French Republic. The elections took place following the 2022 French presidential election, which was held in April 2022. They have been described as the most indecisive legislative elections since the establishment of the five-year term in 2000 and reversal of the electoral calendar in 2002.

Horizons is a centre-right political party in France founded in October 2021 by Édouard Philippe, at the time mayor of Le Havre and ex-Prime Minister of France.

The New Ecologic and Social People's Union is a left-wing alliance of political parties in France led by Jean-Luc Mélenchon. Formed on May Day 2022, the alliance includes La France Insoumise (LFI), the Socialist Party (PS), the French Communist Party (PCF), Europe Ecology – The Greens (EELV), Ensemble! (E!), and Génération.s (G.s), and their respective smaller partners. It was the first wide left-wing political alliance since the Plural Left in the 1997 French legislative election. Over 70 dissident candidates who refused the accord still ran.

François Piquemal is a French politician and educator who was elected to represent the Haute-Garonne's 4th constituency in the 2022 legislative election. A member of La France Insoumise, Piquemal ran as a candidate of the left-wing New Ecologic and Social People's Union (NUPES) coalition in 2022. Piquemal previously served as a municipal councilor in Toulouse, Occitania.