The Enumclaw Plateau, on which the city resides, was formed by a volcanic mudflow (lahar) from Mount Rainier approximately 5,700 years ago. [4]

The name Enumclaw is derived from a Salish term that translates as "place of evil spirits", apparently referring to Enumclaw Mountain, located about 6 miles (9.7 km) to the north. The mountain's name was derived from an evil incident that occurred there or to the occasional powerful windstorms from the east that affect the region. [5] [6] Native American mythology tells the story of two brothers – Enumclaw and Kapoonis – who were turned into thunder and lightning, respectively, by their father. The City of Enumclaw says the name means "thundering noise". [7]

One of the first white settlers in south King County was Allen L. Porter. In 1853, he claimed a 320-acre (1.3 km2) parcel on the White River, about three miles (5 km) west of the site of Enumclaw. He maintained a troubled relationship with the local Smalkamish tribe (some of the ancestors of the Muckleshoot tribe) for some time, and in 1855 his cabin was burned to the ground. Porter, who had been warned in advance by a friend in the tribe, hid in the woods until they had left. After warning the settlers at Fort Steilacoom, he left the area, moving to Roy. He would never return to Enumclaw.

Enumclaw itself was homesteaded in 1879 by Frank and Mary Stevenson. In 1885, the Northern Pacific Railroad routed their transcontinental mainline through the site, accepting their offer of cleared, level land on which to build a siding. Confident that the area would grow, the Stevensons filed a plat with King County that same year. They built a hotel and gave away lots for a saloon and a general store.

At first the people called the town 'Stevensonville' after the founders, who soon refused the honor. One resident suggested 'Enumclaw,' which was the name of the strange sawed-off promontory north of town. The name's uniqueness gained favor with the locals.

On January 11, 1895, Mount Baldy, a small peak above the town, "erupted" with tremendous fire and smoke, although no losses or damage were reported, and the conflagration was minimized by residents. [8] Throughout the 1880s and 1890s the area was farmed for hops. When the hops crop failed due to pests and economic downturn, the residents turned to dairy farming, which has been a mainstay ever since. The first census listing Enumclaw in 1900 put the population at 483 people.

The city was incorporated on January 27, 1913. In 1929, a much-anticipated route to Eastern Washington was opened across the Naches Pass Highway. In the 1950s Enumclaw Insurance Group greatly expanded its business and the home office became a major employer in the town. The company is an insurer doing business in Washington, Oregon, Idaho and Utah.

The city is located in the midst of flat, level farmlands and dairy farms in the east Puget Sound lowlands. The flat geography in the middle of mountainous territory is due to the ancient Osceola Mudflow from nearby Mount Rainier.

The city is unique in the fact that it is landlocked by farm preservation on three sides [13] and protected forest lands to the east. [14] The city is nestled against the Cascade foothills.

While Enumclaw is entirely located in King County, the city owns some park property within the boundaries of Pierce County. [16]

This region experiences very warm (but not hot) and dry summers, with no average monthly temperatures above 71.6 °F (22 C) . According to the Köppen Climate Classification system, Enumclaw has a warm-summer Mediterranean climate, abbreviated "Csb" on climate maps. [17]

Enumclaw has a downtown that is filled with small local shops and restaurants, in contrast to other towns with big-box stores. Several companies, including Helac, Nor-Pac Seating, Nether Industries, and Hill AeroSystems, maintain major offices in the city.[ citation needed ] The remoteness of Enumclaw has made it a cost-competitive suburb for commuters, with the median home valued at $266,100 in 2013. [18] Enumclaw has the most dairy farms in production (16 Grade "A") within the King and Pierce County region.[ citation needed ]

Enumclaw is the gateway to Mount Rainier National Park and the Crystal Mountain ski area. It is located along the Chinook Scenic Byway (SR 410), which provides seasonal access to the Yakima Valley and Eastern Washington. [19] Enumclaw is near four state parks: Nolte, Flaming Geyser, Kanaskat Palmer, and Federation Forest. [20]

According to the FBI's latest crime report (2017 data, issued in 2018), out of 281 cities in Washington State, Enumclaw is the 18th safest city for violent and property crimes.

In the year 2000, the center of population of Washington State was located in an unincorporated part of King County, just northeast of town. [22]

There were 4,420 households, of which 32.9% had children under the age of 18 living with them, 45.9% were married couples living together, 12.4% had a female householder with no husband present, 4.8% had a male householder with no wife present, and 36.8% were non-families. 30.8% of all households were made up of individuals, and 14% had someone living alone who was 65 years of age or older. The average household size was 2.39 and the average family size was 3.00.

City council meetings are held on the second and fourth Mondays of each month at 7:00 p.m. in Council Chambers at City Hall. The agenda and Council packets are available online and at City Hall prior to the meeting.

Enumclaw is one of just three cities in Washington with breed-specific legislation limiting pit bull dogs within the city limits. [27] Enumclaw has also chosen to ban the production, distribution and sale of recreational marijuana.

The City of Enumclaw operates its own solid waste utility (garbage), water, stormwater and sewer departments. The city is unique as it is just one of two cities in Washington state that owns its natural gas utility.

The town is home to the Courier-Herald newspaper. Enumclaw is also home to KGRG (1330 AM), a 500 watt AM college radio station licensed to the Green River Foundation and operated by Green River Community College in Auburn, as well as the non-profit 501(c)3 media studio Knok Studio.

Encumclaw's general hospital, St. Elizabeth Hospital, is part of the Catholic Health Initiatives (a five-hospital organization based in Tacoma). [29] The hospital was included on the 2011 list of the 25 "Most Wired" small and rural hospitals in the nation for its use of information technology to support quality patient care and achieve operational efficiencies. [30] It replaced the former Enumclaw Community Hospital in 2011. [12]

The Enumclaw Expo Center annually hosts the King County Fair and the Pacific Northwest Scottish Highland Games, [31] among a number of other exhibitions and festivals. The Olympic Kennel Club has the 5th largest dog show in the nation each year in August. The 72-acre (29 ha) facility has many areas that are available to rent for weddings, trade shows, conventions and other special events.

Pacific County is a county in the U.S. state of Washington. As of the 2020 census, the population was 23,365. Its county seat is South Bend, and its largest city is Raymond. The county was formed by the government of Oregon Territory in February 1851 and is named for the Pacific Ocean. 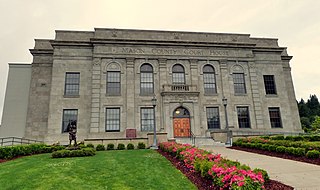 Mason County is a county located in the U.S. state of Washington. As of the 2020 census, the population was 65,726. The county seat and only incorporated city is Shelton. The county was formed out of Thurston County on March 13, 1854. Originally named Sawamish County, it took its present name in 1864 in honor of Charles H. Mason, the first Secretary of Washington Territory.

Jefferson County is a county located in the U.S. state of Washington. As of the 2020 census, the population was 32,977. The county seat and only incorporated city is Port Townsend. The county is named for Thomas Jefferson.

Washington is a city in and the county seat of Washington County, Iowa, United States. It is part of the Iowa City, Iowa Metropolitan Statistical Area. The population was 7,352 at the time of the 2020 census.

Washington is a city on the Missouri River in Franklin County, Missouri, United States. The population was 13,892 from the 2010 census. It is the corncob pipe capital of the world, with Missouri Meerschaum located on the riverfront.

Beaux Arts is a town located in the Eastside region of King County, Washington, United States. It is the smallest municipality in the county, with a population of 299 as of the 2010 census and a land area of 0.1 sq mi. There is no town hall, with official city business meetings taking place in private homes.

Black Diamond is a city in King County, Washington, United States. The population was 4,697 at the 2020 census. 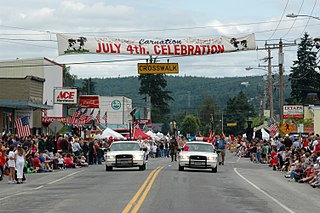 Carnation is a city in King County, Washington, United States. The population was 2,158 at the 2020 census. It was historically known as Tolt and lies at the confluence of the Snoqualmie and Tolt rivers. The city is located east of Redmond and south of Duvall on State Route 203.

Covington is a city in King County, Washington, United States. The population was 20,777 at the time of the 2020 census. Prior to the 2010 census, Covington was counted as part of Covington-Sawyer-Wilderness CDP.

Lakeland South is a census-designated place (CDP) in King County, Washington, United States. The population was 11,574 at the 2010 census.

Ravensdale is a census-designated place (CDP) in King County, Washington, United States. The population was 555 at the 2020 census.

Sammamish is a city in King County, Washington, United States. The population was 67,455 at the 2020 census. Located on a plateau, the city is bordered by Lake Sammamish to the west and the Snoqualmie Valley to the east. 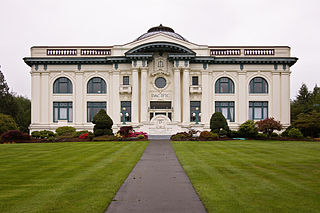 South Bend is a city in Pacific County, Washington, United States. It is the county seat of Pacific County. The population was 1,637 as of the 2010 census. The town is widely-known for its oyster production and scenery.

Buckley is a city in Pierce County, Washington, United States, founded in 1882. The population was 5,114 at the 2020 census. Buckley sits below Mount Rainier and is well known for hosting the annual Log Show.

Greenwater is a census-designated place (CDP) in the northwest United States in Pierce County, Washington. Southeast of Seattle, the population was 67 at the 2010 census, down from 91 in 2000.

Steilacoom is a town in Pierce County, Washington, United States. The population was 6,727 at the 2020 census. Steilacoom incorporated in 1854 and became the first incorporated town in what is now the state of Washington. It has also become a bedroom community for service members stationed at Joint Base Lewis–McChord.

Wilkeson is a town in Pierce County, Washington, United States. The population was 499 at the 2020 census.

Milton is a city in King and Pierce counties in the U.S. state of Washington. The population was 8,697 at the time of the 2020 census. Milton borders the larger but newer town of Edgewood.

Pacific is a city in King and Pierce counties in the State of Washington. Located primarily in King County, the population was 7,235 at the 2020 census.

Durand is the county seat of Pepin County, Wisconsin, United States. Situated on the banks of the Chippewa River approximately 15 miles (24 km) from its confluence with the Mississippi River, the city borders the Town of Durand. The population was 1,931 at the 2010 census.