Ephesian school sometimes refers to the philosophical thought of the ancient Greek philosopher Heraclitus of Ephesus, who considered that the being of all the universe is fire. According to him, the being is material and one, but at the same time he acknowledges that the world witnesses constant change. Motion of the archelement (fire) is discordant and unharmonious, even though harmony is the final result of the process.

Although there was never an official "Ephesian School," Diogenes Laërtius (ix. 6) mentions that his philosophy did have followers who called themselves "Heracliteans." Plato portrays Cratylus in his dialogue of the same name as a disciple of Heraclitus.

Fire is one of the four classical elements in ancient Greek philosophy and science. Fire is considered to be both hot and dry, and according to Plato is associated with the tetrahedron.

The Epistle to the Ephesians, also called the Letter to the Ephesians and often shortened to Ephesians, is the tenth book of the New Testament. Its authorship has traditionally been attributed to Paul the Apostle but starting in 1792, this has been challenged as Deutero-Pauline, that is, written in Paul's name by a later author strongly influenced by Paul's thought, probably "by a loyal disciple to sum up Paul’s teaching and to apply it to a new situation fifteen to twenty-five years after the Apostle’s death".

Heraclitus of Ephesus son of Bloson, was a pre-Socratic Ionian Greek philosopher, and a native of the city of Ephesus, in modern-day Turkey and then part of the Persian Empire.

In logic, the law of non-contradiction (LNC) states that contradictory propositions cannot both be true in the same sense at the same time, e. g. the two propositions "A is B" and "A is not B" are mutually exclusive. Formally this is expressed as the tautology ¬(p ∧ ¬p).

Pre-Socratic philosophy is ancient Greek philosophy before Socrates and schools contemporary to Socrates that were not influenced by him. In Classical antiquity, the pre-Socratic philosophers were called physiologoi. Their inquiries spanned the workings of the natural world as well as human society, ethics, and religion, seeking explanations based on natural principles rather than the actions of supernatural gods. They introduced to the West the notion of the world as a kosmos, an ordered arrangement that could be understood via rational inquiry. Significant figures include: the Milesians, Heraclitus, Parmenides, Empedocles, Zeno of Elea, and Democritus, among others.

Ancient Greek philosophy arose in the 6th century BC and continued throughout the Hellenistic period and the period in which Greece and most Greek-inhabited lands were part of the Roman Empire. Philosophy was used to make sense out of the world in a non-religious way. It dealt with a wide variety of subjects, including astronomy, mathematics, political philosophy, ethics, metaphysics, ontology, logic, biology, rhetoric and aesthetics.

Aenesidemus was a Greek Pyrrhonist philosopher, born in Knossos on the island of Crete. He lived in the 1st century BC, taught in Alexandria and flourished shortly after the life of Cicero. Photius says he was a member of Plato's Academy, but he came to dispute their theories, adopting Pyrrhonism instead. Diogenes Laërtius claims an unbroken lineage of teachers of Pyrrhonism through Aenesidemus, with his teacher being Heraclides and his student being Zeuxippus. However, little is known about several of the names between Timon of Phlius and Aenesidemus, so this lineage is suspect. Whether Aenesidemus re-founded the Pyrrhonist school or merely revitalized it is unknown.

In the metaphysics of identity, the ship of Theseus is a thought experiment that raises the question of whether an object that has had all of its components replaced remains fundamentally the same object. The concept is one of the oldest in Western philosophy, having been discussed by the likes of Heraclitus and Plato by ca. 500-400 BC.

Heinrich Friedrich Ernst Blücher was a German poet and philosopher. He was the second husband of Hannah Arendt who he had first met in Paris in 1936. During his life in America, Blücher traveled in popular academic circles and appears prominently in the lives of various New York intellectuals.

The Ionian school of Pre-Socratic philosophy was centred in Miletus, Ionia in the 6th century BC. Miletus and its environs was a thriving mercantile melting pot of current ideas of the time. The Ionian School included such thinkers as Thales, Anaximander, Anaximenes, Heraclitus, Anaxagoras, and Archelaus. The collective affinity of this group was first acknowledged by Aristotle who called them physiologoi (φυσιολόγοι), meaning 'those who discoursed on nature'. The classification can be traced to the second-century historian of philosophy Sotion. They are sometimes referred to as cosmologists, since they were largely physicalists who tried to explain the nature of matter.

Philosophy in the Tragic Age of the Greeks is an incomplete book by Friedrich Nietzsche. He had a clean copy made from his notes with the intention of publication. The notes were written around 1873. In it he discussed five Greek philosophers from the sixth and fifth centuries BC. They are Thales, Anaximander, Heraclitus, Parmenides, and Anaxagoras. He had, at one time, intended to include Democritus, Empedocles, and Socrates. The book ends abruptly after the discussion of Anaxagoras's cosmogony.

Physis is a Greek theological, philosophical, and scientific term usually translated into English as "nature". 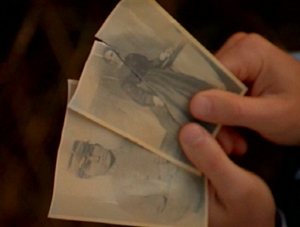 "The Field Where I Died" is the fifth episode of the fourth season of the American science fiction television series The X-Files. It was written by Glen Morgan and James Wong, and directed by Rob Bowman. The episode originally aired in the United States on November 3, 1996 on the Fox network. It is a "Monster-of-the-Week" story, a stand-alone plot which is unconnected to the series' wider mythology. This episode earned a Nielsen rating of 12.3 and was seen by 19.85 million viewers upon its initial broadcast.

The unity of opposites is the central category of dialectics, said to be related to the notion of non-duality in a deep sense. It defines a situation in which the existence or identity of a thing depends on the co-existence of at least two conditions which are opposite to each other, yet dependent on each other and presupposing each other, within a field of tension.

Hermodorus, an Ephesian who lived in the 4th century BC, was an original member of Plato's Academy and was present at the death of Socrates. He is said to have circulated the works of Plato, and to have sold them in Sicily. Hermodorus himself appears to have been a philosopher, for we know the titles of two works that were attributed to him: On Plato, and On Mathematics.

In philosophy, becoming is the possibility of change in a thing that has being, that exists. 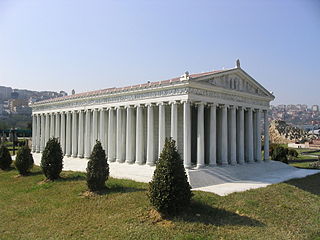 The Temple of Artemis or Artemision, also known less precisely as the Temple of Diana, was a Greek temple dedicated to an ancient, local form of the goddess Artemis. It was located in Ephesus. It was completely rebuilt twice, once after a devastating flood and three hundred years later after an act of arson, and in its final form was one of the Seven Wonders of the Ancient World. By 401 AD it had been ruined or destroyed. Only foundations and fragments of the last temple remain at the site.

Ephesians 2 is the second chapter of the Epistle to the Ephesians in the New Testament of the Christian Bible. Traditionally, it is believed to have been written by Apostle Paul while he was in prison in Rome, but more recently it has been suggested that it was written between AD 80 and 100 by another writer using Paul's name and style.