Eric Allin Cornell (born December 19, 1961) is an American physicist who, along with Carl E. Wieman, was able to synthesize the first Bose–Einstein condensate in 1995. For their efforts, Cornell, Wieman, and Wolfgang Ketterle shared the Nobel Prize in Physics in 2001.

Cornell was born in Palo Alto, California, where his parents were completing graduate degrees at nearby Stanford University. Two years later he moved to Cambridge, Massachusetts, where his father was a professor of civil engineering at MIT. Here he grew up with his younger brother and sister, with yearlong intermezzos in Berkeley, California, and Lisbon, Portugal, where his father spent sabbatical years. [1]

In Cambridge he attended Cambridge Rindge and Latin School. The year before his graduation he moved back to California with his mother and finished high school at San Francisco's Lowell High School, a local magnet school for academically talented students. [1]

After high school he enrolled at Stanford University, where he was to meet his future wife, Celeste Landry. As an undergraduate he earned money as an assistant in the various low-temperature physics groups on campus. He was doing well both in his courses and his jobs in the labs and seemed set for a career in physics. He however doubted whether he wished to pursue such a career, or rather a different one in literature or politics. Halfway through his undergraduate years he went to China and Taiwan for nine months to volunteer teaching conversational English and to study Chinese. He learned that this was not where his talents lay, and returned to Stanford with renewed resolve to pursue his true talent – physics. He graduated with honors and distinction in 1985. [1]

For graduate school he returned to MIT. There he joined David Pritchard's group, which had a running experiment that tried to measure the mass of the electron neutrino from the beta decay of tritium. Although he was unable to determine the mass of the neutrino, Cornell did obtain his PhD in 1990. [1]

After obtaining his doctorate he joined Carl Wieman at the University of Colorado Boulder as a postdoctoral researcher on a small laser cooling experiment. During his two years as a postdoc he came up with a plan to combine laser cooling and evaporative cooling in a magnetic trap to create a Bose–Einstein condensate (BEC). Based on his proposal he was offered a permanent position at JILA/NIST in Boulder. [1] For synthesizing the first Bose–Einstein condensate in 1995, Cornell, Wieman, and Wolfgang Ketterle shared the Nobel Prize in Physics in 2001.

He is currently a professor at the University of Colorado Boulder and a physicist at the United States Department of Commerce National Institute of Standards and Technology. His lab is located at JILA. He was awarded the Lorentz Medal in 1998 and is a Fellow of the American Association for the Advancement of Science.

He was elected a Fellow of the American Academy of Arts and Sciences in 2005. [2]

Cornell received multiple awards including the Nobel Prize in Physics in 2001.

Cornell married Celeste Landry in 1995 mere months before the BEC experiment succeeded. Their first daughter, Eliza, was born in 1996, and their second daughter, Sophia, in 1998. [1]

In October 2004, his left arm and shoulder were amputated in an attempt to stop the spread of necrotizing fasciitis. He was discharged from the hospital in mid-December, having recovered from the infection, and returned to work part-time in April 2005. [3]

In condensed matter physics, a Bose–Einstein condensate (BEC) is a state of matter that is typically formed when a gas of bosons at low densities is cooled to temperatures very close to absolute zero. Under such conditions, a large fraction of bosons occupy the lowest quantum state, at which point microscopic quantum mechanical phenomena, particularly wavefunction interference, become apparent macroscopically. A BEC is formed by cooling a gas of extremely low density to ultra-low temperatures.

Carl Edwin Wieman is an American physicist and educationist at Stanford University. In 1995, while at the University of Colorado Boulder, he and Eric Allin Cornell produced the first true Bose–Einstein condensate (BEC) and, in 2001, they and Wolfgang Ketterle were awarded the Nobel Prize in Physics. Wieman currently holds a joint appointment as Professor of Physics and Professor in the Stanford Graduate School of Education, as well as the DRC Professor in the Stanford University School of Engineering. In 2020, Wieman was awarded the Yidan Prize in Education Research for "his contribution in developing new techniques and tools in STEM education." citation.

William Daniel Phillips is an American physicist. He shared the Nobel Prize in Physics, in 1997, with Steven Chu and Claude Cohen-Tannoudji. 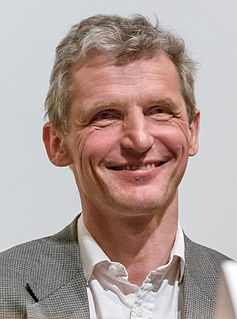 John Lewis "Jan" Hall is an American physicist, and Nobel laureate in physics. He shared the 2005 Nobel Prize in Physics with Theodor W. Hänsch and Roy Glauber for his work in precision spectroscopy.

Brian L. DeMarco is a physicist and Professor of Physics at the University of Illinois at Urbana-Champaign. In 2005 he placed first in the quantum physics portion of the "Amazing Light" competition honoring Charles Townes, winner of the 1964 Nobel Prize in Physics. DeMarco is currently conducting experiments in quantum simulation.

The MIT Department of Physics has over 120 faculty members, is often cited as the largest physics department in the United States, and hosts top-ranked programs. It offers the SB, SM, PhD, and ScD degrees. Fourteen alumni of the department and nine current or former faculty members have won the Nobel Prize in Physics.

Jun Ye is a Chinese-American physicist at JILA, National Institute of Standards and Technology, and the University of Colorado Boulder, working primarily in the field of atomic, molecular and optical physics.

Katharine Blodgett Gebbie was an American astrophysicist and civil servant. She was the founding Director of the Physical Measurement Laboratory of the National Institute of Standards and Technology (NIST), and of its two immediate predecessors, the Physics Laboratory and the Center for Atomic, Molecular and Optical Physics, both for which she was the only Director. During her 22 years of management of these institutions, four of its scientists were awarded the Nobel Prize in Physics. In 2015, the NIST Katharine Blodgett Gebbie Laboratory Building in Boulder, Colorado was named in her honor. 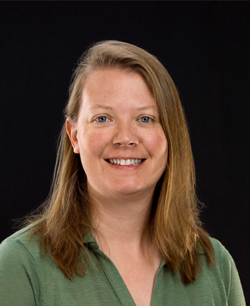 Heather Lewandowski is a Professor of Physics at the University of Colorado Boulder. She looks to understand the quantum mechanical processes in making chemical bonds. She uses time-varying inhomogeneous electric fields to achieve supersonic cooling. She also studies how students learn experimental skills in instructional physics labs and help to improve student learning in these environments. She is a Fellow of the American Physical Society.

Gretchen K. Campbell is an American atomic, molecular, and optical physicist from the National Institute of Standards and Technology. She works in the emerging field of atomtronics and has received awards in recognition of her research contributions on Bose-Einstein condensates.