Erica Jong (née Mann; born March 26, 1942) is an American novelist, satirist, and poet, known particularly for her 1973 novel Fear of Flying . The book became famously controversial for its attitudes towards female sexuality and figured prominently in the development of second-wave feminism. According to The Washington Post , it has sold more than 20 million copies worldwide. [1]

Jong was born on March 26, 1942 in New York.[ citation needed ] She is the middle daughter of Seymour Mann (né Nathan Weisman, died 2004), and Eda Mirsky (1911–2012).[ citation needed ] Her father was a businessman of Polish Jewish ancestry who owned a gifts and home accessories company [2] known for its mass production of porcelain dolls. Her mother was born in England of a Russian Jewish immigrant family, and was a painter and textile designer who also designed dolls for her husband's company. [3] Jong has an elder sister, Suzanna, who married Lebanese businessman Arthur Daou, and a younger sister, Claudia, a social worker who married Gideon S. Oberweger (the chief executive officer of Seymour Mann Inc. until his death in 2006). [4] Among her nephews is Peter Daou, who is a Democratic party strategist. [5] Jong attended New York's The High School of Music & Art in the 1950s, where she developed her passion for art and writing. As a student at Barnard College, Jong edited the Barnard Literary Magazine and created poetry programs for the Columbia University campus radio station. [6] [7]

A 1963 graduate of Barnard College with an MA (1965) in 18th century English Literature from Columbia University, Jong is best known for her first novel, Fear of Flying (1973), which created a sensation with its frank treatment of a woman's sexual desires. [1] Although it contains many sexual elements, the book is mainly the account of Isadora Wing, a woman in her late twenties, trying to find who she is and where she is going. It contains many psychological and humorous descriptive elements, as well as rich cultural and literary references. The book tries to answer the many conflicts arising for women in late 1960s and early 1970s America, of womanhood, femininity, love, one's quest for freedom and purpose. [8] The saga of thwarted fulfillment of Isadora Wing continues in two more novels How to Save Your Own Life (1977) and Parachutes and Kisses (1984).

Jong has been married four times. Her first two marriages, to college sweetheart Michael Werthman, and to Allan Jong, a Chinese American psychiatrist, reflect those of the narrator of Fear of Flying.[ citation needed ] Her third husband was Jonathan Fast, a novelist and social work educator, and son of novelist Howard Fast. This marriage was described in How to Save Your Own Life and Parachutes and Kisses. She has a daughter from her third marriage, Molly Jong-Fast. Jong is now married to Kenneth David Burrows, [9] [10] a New York litigator. In the late 1990s, Jong wrote an article about her current marriage in the magazine Talk .

Jong lived on an army base in Heidelberg, Germany, for three years (1966–69) with her second husband. She was a frequent visitor to Venice, and wrote about that city in her novel Shylock's Daughter.

In 2007, her literary archive was acquired by Columbia University in New York City.

Jong is mentioned in the Bob Dylan song "Highlands" ( Time Out of Mind (1997) ), and satirized on the MC Paul Barman track "N.O.W.", in which the rapper fantasizes about a young leftist carrying a fictitious Jong book titled America's Wrong. [11]

Jong supports LGBT rights and legalization of same-sex marriage. She says, "Gay marriage is a blessing not a curse. It certainly promotes stability and family. And it's certainly good for kids." [12] 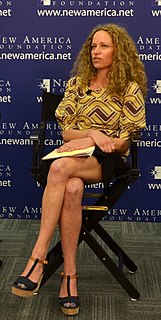 Katie Roiphe is an American author and journalist. She is best known as the author of the non-fiction examination The Morning After: Fear, Sex and Feminism (1994). She is also the author of Last Night in Paradise: Sex and Morals at the Century's End (1997), and the 2007 study of writers and marriage, Uncommon Arrangements. Her 2001 novel Still She Haunts Me is an imagining of the relationship between Charles Dodgson and Alice Liddell, the real-life model for Dodgson's Alice's Adventures in Wonderland. She is also known for allegedly planning to out the creator of the Shitty Media Men list in an article for Harper's magazine.

Judith Krantz was a magazine writer and fashion editor who turned to fiction as she approached the age of 50. Her first novel Scruples (1978) quickly became a New York Times best-seller and went on to be a worldwide publishing success, translated into 50 languages. Scruples, which describes the glamorous and affluent world of high fashion in Beverley Hills, California, helped define a new supercharged sub-genre of the romance novel - the bonkbuster or "sex-and-shopping" novel. She also fundamentally changed the publishing industry by becoming one of the first celebrity authors through her extensive touring and promotion - "a superstar of fiction". Her later books included Princess Daisy (1980), Till We Meet Again (1988), Dazzle (1990) and Spring Collection (1996). Her autobiography, Sex and Shopping: The Confessions of a Nice Jewish Girl, was published in 2000.

Frances Sargent Osgood was an American poet and one of the most popular women writers during her time. Nicknamed "Fanny", she was also famous for her exchange of romantic poems with Edgar Allan Poe.

Fear of Flying is a 1973 novel by Erica Jong which became famously controversial for its portrayal of female sexuality and figured in the development of second-wave feminism.

Miranda Jane Seymour is an English literary critic, novelist, and biographer. The lives she wrote included those of Robert Graves and Mary Shelley.

Elizabeth Janeway was an American author and critic.

Naomi Foner Gyllenhaal is an American screenwriter, director, and former wife of Stephen Gyllenhaal. She is the mother of actors Maggie and Jake Gyllenhaal.

Rosewood is a 1997 American historical drama film directed by John Singleton. While based on historic events of the 1923 Rosewood massacre in Florida, when a white mob killed black people and destroyed their town, the film introduces fictional characters and changes from historic accounts. In a major change, it stars Ving Rhames as an outsider who comes into Rosewood and inspires residents to self-defense, wielding his pistols in a fight. The supporting cast includes Don Cheadle as Sylvester Carrier, a resident who was a witness, defender of his family and victim of the riot; and Jon Voight as John Wright, a sympathetic white store owner who lives in Rosewood. The three characters become entangled in an attempt to save people from racist whites attacking the blacks of Rosewood.

An Instinct for the Kill (ISBN 0-7322-5891-X) is the second of Antonella Gambotto-Burke's books and her second anthology. It was dedicated to investment banker Mark Burrows. In his introduction to the book, Edward de Bono writes: "Antonella is not afraid of words, ideas, her own opinions or the opinions of others. Perception is personal so truth is also personal. This is much more like Protagoras than like Plato. For Protagoras, perception was the only truth – but it was changeable. For Plato, the fascist, truth was what you had reached when you thought it was the absolute."

Fanny Fern, born Sara Willis, was an American novelist, children's writer, humorist, and newspaper columnist in the 1850s to 1870s. Fern's popularity has been attributed to her conversational style and sense of what mattered to her mostly middle-class female readers. By 1855, Fern was the highest-paid columnist in the United States, commanding $100 per week for her New York Ledger column. A collection of her columns published in 1853 sold 70,000 copies in its first year. Her best-known work, the fictional autobiography Ruth Hall (1854), has become a popular subject among feminist literary scholars.

Anne Charlotte Lynch Botta was an American poet, writer, teacher and socialite whose home was the central gathering place of the literary elite of her era.

Molly Jong-Fast is an American author and liberal pundit. She is the daughter of Erica Jong and Jonathan Fast, and the granddaughter of Howard Fast. She is the author of two novels, Normal Girl and The Social Climber's Handbook, and a memoir, Girl [Maladjusted]. She is a regular contributor to Playboy, Glamour, The Bulwark, and The Daily Beast.

Frances "Fanny" Imlay, also known as Fanny Godwin and Frances Wollstonecraft, was the illegitimate daughter of the British feminist Mary Wollstonecraft and the American commercial speculator and diplomat Gilbert Imlay. Wollstonecraft wrote about her frequently in her later works. Fanny grew up in the household of anarchist political philosopher William Godwin, the widower of her mother, with his second wife and their combined family of five children. Fanny's half-sister Mary grew up to write Frankenstein and married Percy Bysshe Shelley, a leading Romantic poet, who composed a poem on Fanny's death.

Renate Stendhal, Ph.D. is an award-winning writer, writing coach and counselor. German-born and Paris-educated, she now lives in California. Her recent memoir Kiss Me Again, Paris: A Memoir was a Lambda Literary Awards Finalist and won an International Book Award. Her offices are in the San Francisco Bay Area.

Kinflicks (1976) is a novel by American writer Lisa Alther. It was Alther's first published work, and the "subject of considerable pre-publication hyperbole."

Vivienne Haigh-Wood Eliot was the first wife of American poet T. S. Eliot, whom she married in 1915, while he was studying at Oxford.

Enslavement: The True Story of Fanny Kemble is a 2000 American television film starring Jane Seymour and directed by James Keach. It depicts the life of British actress and abolitionist Fanny Kemble, who sees first-hand the horrors of slavery when she marries an American plantation owner. Her published diaries in the form of personal accounts are shown to influence the British government's decision to withhold support of the Confederacy during the American Civil War. Keith Carradine co-stars as Fanny's husband Pierce Butler, with Keach, Adewale Akinnuoye-Agbaje, and Colin Fox also appearing.

Fanny Vining Davenport was an English actress who emigrated to America. After her marriage to the American tragedian Edward Loomis Davenport she was well known as Mrs. E. L. Davenport. Their children included actress Fanny Davenport and actor Harry Davenport; their descendants include actresses Dorothy Davenport and Anne Seymour.