Ernest Flagg (February 6, 1857 – April 10, 1947) was an American architect in the Beaux-Arts style. He was also an advocate for urban reform and architecture's social responsibility. [1]

Flagg was born in Brooklyn, New York City, New York. His father Jared Bradley Flagg was an Episcopal priest and a notable painter. [2] [3] Ernest left school at 15 to work as an office boy on Wall Street. After working with his father and brothers in real estate for a few years, he designed duplex apartment plans in 1880 with the architect Philip Gengembre Hubert, for the co-operative apartment buildings Hubert was known.

Cornelius Vanderbilt II, Flagg's cousin through his marriage to Alice Claypoole Gwynne, [4] was impressed by Flagg's work and sent him to study at the École des Beaux-Arts in Paris from 1889–1891, under his patronage.

In 1891, Flagg began his architectural practice in New York, greatly influenced by his knowledge of the French ideas of architectural design, such as structural rationalism.

In 1894, he established the architectural firm of Flagg & Chambers with Walter B. Chambers, whom he met in Paris. Usually Flagg alone is credited for some of the work he and Chambers worked on together, such as the Corcoran Gallery of Art, the U.S. Naval Academy, and Pomfret School in Connecticut which he saw as "part of the process of evolution that would contribute to the creation of a national style of architecture.” [6]

Louisa Flagg Scribner, Flagg's sister, was the wife of Charles Scribner II. Through this familial connection, Flagg designed six structures located in Manhattan for the publishing family, including at 153–157 Fifth Avenue and 597 Fifth Avenue. [7]

Flagg is probably best known for his design of the Singer Building. Completed in 1897 and expanded in 1908, it was then the tallest office building in the world, at 612 feet. [8] Faithful to his Beaux-Arts training, Flagg allowed space around the tall building for light to enter, which was unusual for the time. [9]

Though Flagg is best known for his large institutional designs, he was also interested in producing modest, attractive homes affordable to average Americans. He developed innovative techniques toward that end and in 1922 published the book Small Houses, Their Economic Design and Construction. He packaged these techniques and ideas into the Flagg System, and collaborated with builders scattered across the U.S. to build them. [9]

His contributions to zoning and height regulations were essential to the 1916 Zoning Resolution, New York's first laws governing this aspect of the city's architecture. Flagg argued in favor of zoning laws which would regulate the height and setback of buildings, to allow light and air to reach the streets below them. [10] He was a president of the New York Society of Beaux-Arts Architects. A small collection of Flagg's personal and professional papers is held in the Department of Drawings & Archives at Avery Architectural and Fine Arts Library at Columbia University.

The homes that Flagg designed are modest, low to the ground, with stone walls, and often with steep roofs, distinctive ridge dormers, and round-capped chimneys. Their styles suggest Tudor Revival, Cotswold Cottage, or French Provincial to various extents. Flagg generally considered surface decoration "sham," and preferred to suggest styles with the general form of the building, adding interest with chimneys and dormers.

As mentioned above, Flagg aimed to make attractive homes affordable to average families, and he did this by the following means:

Flagg tested some of his designs for modest homes on his Staten Island estate, and many of these demonstration models are still in use. Afterwards, more were built around New York and across the US. Flagg worked with particular builders, training them on his system. The builder sent the clients' requirements to Flagg, he sent back plans, the builder and local inspectors adjusted the plans for local building codes, and the builder constructed the home. [8] In the Milwaukee, Wisconsin, area, over two dozen of these homes were built from 1924 to 1926, and they survive largely intact, now listed on the National Register of Historic Places. [9]

Ernest Flagg married Margaret E. Bonnell on June 27, 1899, in New York City. They had one daughter, Margaret Elizabeth, who became a well-respected small-scale portrait painter and is known professionally as Betsy Flagg Melcher. [11]

In 1912, Mr. and Mrs. Ernest Flagg were on their way to a party held by Stowe Phelps, a fellow architect, when their limousine struck and killed a boy (James McNamara) who had suddenly skated in front of the car. The couple drove the boy to the hospital but he died en route. [12] 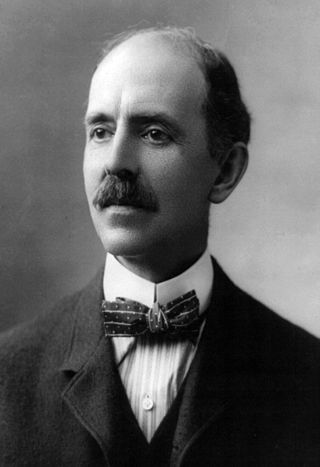 Daniel Chester French was an American sculptor of the late nineteenth and early twentieth centuries, best known for his 1874 sculpture The Minute Man in Concord, Massachusetts, and his 1920 monumental statue of Abraham Lincoln in the Lincoln Memorial in Washington, D.C. 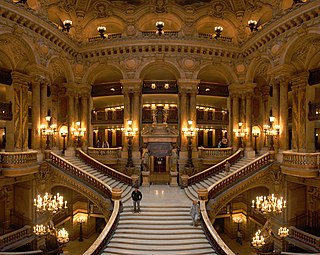 Beaux-Arts architecture was the academic architectural style taught at the École des Beaux-Arts in Paris, particularly from the 1830s to the end of the 19th century. It drew upon the principles of French neoclassicism, but also incorporated Renaissance and Baroque elements, and used modern materials, such as iron and glass. It was an important style in France until the end of the 19th century. 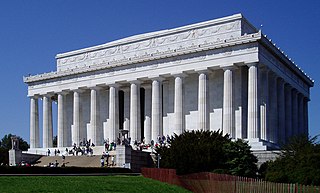 Henry Bacon was an American Beaux-Arts architect who is best remembered for the Lincoln Memorial in Washington, D.C., which was his final project.

The year 1899 in architecture involved some significant events. 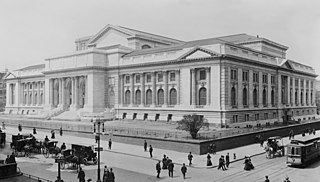 Carrère and Hastings, the firm of John Merven Carrère and Thomas Hastings, was one of the outstanding American Beaux-Arts architecture firms. Located in New York City, the firm practiced from 1885 until 1929, although Carrère died in an automobile accident in 1911.

Pomfret School is an independent, coeducational, college preparatory boarding and day school in Pomfret, Connecticut, United States, serving 350 students in grades 9 through 12 and post-graduates. Located in the Pomfret Street Historic District, the average class size is 12 students with a student-teacher ratio of 6:1. Over 80% of faculty hold master's degrees or doctorates. Typically, 40% of students receive financial aid or support from over 60 endowed scholarship funds, 20% are students of color, 21% are international students. 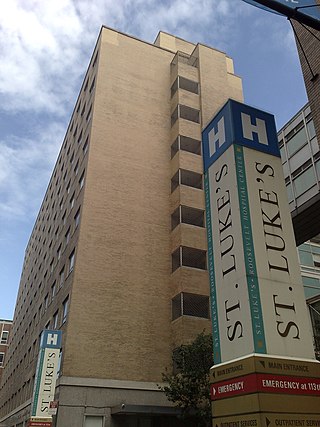 Mount Sinai Morningside, formerly known as Mount Sinai St. Luke's, is a teaching hospital located in the Morningside Heights neighborhood of Manhattan in New York City. It is affiliated with the Icahn School of Medicine at Mount Sinai and the Mount Sinai Health System, a nonprofit hospital system formed by the merger of Continuum Health Partners and the Mount Sinai Medical Center in September 2013. It provides general medical and surgical facilities, ambulatory care, and a Level 2 Trauma Center, verified by the American College of Surgeons. From 1978 to 2020, it was affiliated with Mount Sinai West as part of St. Luke's–Roosevelt Hospital Center. 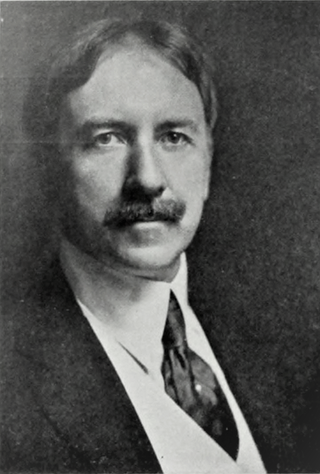 William Welles Bosworth was an American architect whose most famous designs include the Massachusetts Institute of Technology Cambridge campus, the original AT&T Building in New York City, and the Theodore N. Vail mansion in Morristown, New Jersey. Bosworth was also responsible to a large degree for the architectural expression of Kykuit, the Rockefeller family estate in Pocantico Hills, New York, working closely with the architects William Adams Delano and Chester H. Aldrich, and the interior designer Ogden Codman. 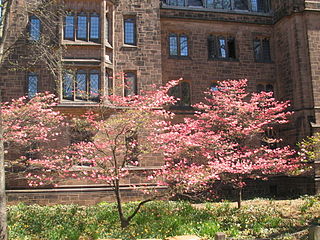 Walter Boughton Chambers, AIA was a successful New York City architect whose buildings continue to be landmarks in the city’s skyline and whose contributions to architectural education were far-reaching. 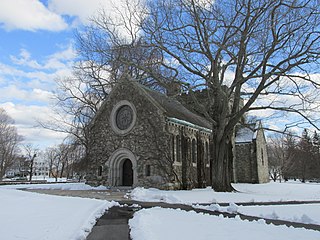 The Pomfret Street Historic District is a historic district roughly along Pomfret Street, from Bradley Road to Woodstock Road in Pomfret, Connecticut, United States. The district represents the core of the village of Pomfret Center.

The Flagg-Coburn House is a historic house at 722 E. Merrimack Street in Lowell, Massachusetts. Built in 1926 for a local industrialist, it is the first known example in New England of the distinctive residential work of New York City architect Ernest Flagg. It was listed on the National Register of Historic Places in 1986. 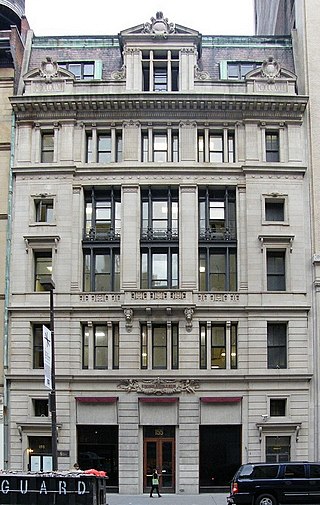 Raymond F. Almirall (1869-1939) was an American architect of the Beaux-Arts period, practicing in New York City.

The Rufus Arndt House in Whitefish Bay, Wisconsin, United States, was built in 1925. It was designed by Ernest Flagg in a style that suggests Tudor Revival and Cotswold Cottage and built by the Arnold F. Meyer & Co. One of the Ernest Flagg Stone Masonry Houses of Milwaukee County, this residence was listed on the National Register of Historic Places on September 12, 1985. 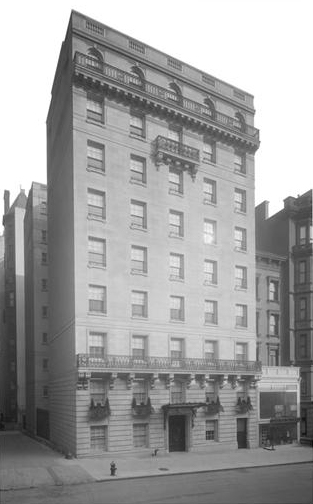 Park House is a cooperative apartment building at 135 West 58th Street between Sixth and Seventh Avenues in Midtown Manhattan, New York City. It was built in 1911 and is considered to be one of the most elegant Beaux-Arts apartment houses in Manhattan.

The First National Bank Building is a historic commercial building at 50-58 State House Square in the heart of downtown Hartford, Connecticut. Built in 1899, it is a fine local example of Beaux Arts architecture, and was one of the first of Hartford's commercial buildings to have a steel frame. It was listed on the National Register of Historic Places in 1984.

Wikiquote has quotations related to Ernest Flagg .
This page is based on this Wikipedia article
Text is available under the CC BY-SA 4.0 license; additional terms may apply.
Images, videos and audio are available under their respective licenses.