Ernesto Fonseca Carrillo (born 1930), commonly referred to by his alias Don Neto, is a convicted Mexican drug lord and former leader of the Guadalajara Cartel, a defunct criminal group based in Jalisco. He headed the organization alongside Miguel Ángel Félix Gallardo and Rafael Caro Quintero. Fonseca Carrillo was involved with drug trafficking since the early 1970s, primarily in Ecuador, and later moved his operations to Mexico. [1]

Ernesto Fonseca Carrillo was born in Santiago de los Caballeros, Badiraguato, Sinaloa, Mexico. [3] Sources disagree on his exact date of birth. According to the Drug Enforcement Administration (DEA), he was born in 1942. [4] Other sources say he was born on August 1, 1930. [5] His son, Gilberto Fonseca Caro was shot and killed on February 13, 1983 outside the Arena Coliseo in Tijuana following a boxing match.

The United States Drug Enforcement Administration (DEA) in 1982 indicted Fonseca in a money laundering operation in San Diego. Prior to the DEA's receiving permission to wiretap the phones where Fonseca was thought to be hiding, Fonseca fled back to Mexico. On April 7, 1985, Fonseca was located in Puerto Vallarta by the Mexican Army, his villa was surrounded, and he surrendered. [1]

Fonseca was later linked to, and admitted taking part in, events surrounding the 1985 murder of DEA agent Kiki Camarena, who was kidnapped and tortured by the Guadalajara cartel. Fonseca did not admit to killing Camarena and stated he was outraged that the agent was beaten. Fonseca was found guilty of the murder by the Mexican judicial system, and was convicted and sentenced to 40 years in prison. [1]

Fonseca was transferred from prison to house arrest in July 2016, because of his old age and declining health, [6] with about nine years remaining on his 40-year sentence. [7] 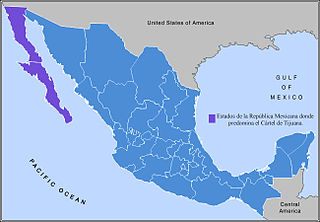 The Tijuana Cartel or Arellano-Félix Organization is a Mexican drug cartel based in Tijuana. The cartel once was described as "one of the biggest and most violent criminal groups in Mexico." However, since the 2006 Sinaloa Cartel incursion in Baja California and the fall of the Arellano-Félix brothers, the Tijuana Cartel has been reduced to a few cells. In 2016, the organization has become known as Cartel Tijuana Nueva Generación and has begun to align itself under the Jalisco New Generation Cartel, along with Beltrán Leyva Organization (BLO) to create an anti-Sinaloa alliance, in which the Jalisco New Generation Cartel heads, creating a possible powershift in Mexico. 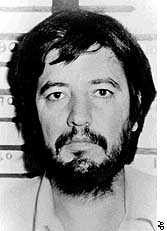 Juan Ramón Matta-Ballesteros is a former major narcotics trafficker who has been credited with being one of the first to connect Mexican drug traffickers with the Colombian cocaine cartels. This connection paved the way for a major increase in the amount of cocaine smuggled into the United States during the late 1970s and throughout the 1980s. Matta was indicted for operating several major cocaine smuggling rings in United States in the early 1980s. He was also one of the narcotics traffickers accused of the kidnap and assassination of American DEA agent Enrique Camarena in 1985.

Miguel Ángel Félix Gallardo, commonly referred to by his alias El Padrino, is a convicted Mexican drug lord who formed the Guadalajara Cartel in the 1970s and controlled almost all of the drug trafficking in Mexico and the corridors along the Mexico–United States border.

The Sonora Cartel, also known as Caro Quintero Organization, is a Mexico based criminal cartel. Upon the cartel's disintegration, its leaders were incorporated into the Tijuana Cartel and Sinaloa Cartel.

Miguel Ángel Caro Quintero is a Mexican convicted drug lord and former leader of the Sonora Cartel, a defunct criminal group based in Sonora.

Pedro Avilés Pérez, also known as "El León de la Sierra", was a Mexican drug lord in the state of Sinaloa in the late 1960s. 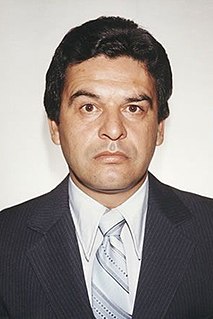 Narcos: Mexico is an American crime drama web television series created and produced by Chris Brancato, Carlo Bernard, and Doug Miro that premiered on Netflix on November 16, 2018. It was originally intended to be the fourth season of the Netflix series Narcos, but it was ultimately developed as a companion series. It focuses on the illegal drug trade in Mexico, whereas the parent series centered on the illegal drug trade in Colombia. On December 5, 2018, Netflix renewed the series for a second season, which premiered on February 13, 2020.

On 9 November 1999, two agents from the United States Drug Enforcement Administration (DEA) and Federal Bureau of Investigation (FBI) were threatened at gunpoint and nearly killed in Matamoros, Tamaulipas, Mexico, by gunmen of the Gulf Cartel, a criminal group based in the area. The two agents traveled to Matamoros with an informant to gather intelligence on the operations of the Gulf Cartel. As they cruised through one of the properties owned by the criminal group, they noticed several vehicles following them. The agents were forced to a stop and were corralled by a convoy of eight vehicles, from which fifteen gunmen emerged and surrounded the agents' car. Some of them wore uniforms of the local police. Among the gunmen was the former kingpin Osiel Cárdenas Guillén, who recognized the informant and ordered the three of them to get out of their vehicle.