Ernst Jandl (German: [jandl̩] ; 1 August 1925 – 9 June 2000) was an Austrian writer, poet, and translator. He became known for his experimental lyric, mainly sound poems (Sprechgedichte) in the tradition of concrete and visual poetric forms.

Influenced by Dada he started to write experimental poetry, first published in the journal "Neue Wege" ("New Ways") in 1952.

He was the life partner of Friederike Mayröcker. In 1973 he co-founded the "Grazer Autorenversammlung" in Graz, became its vice president in 1975 and was its president from 1983 to 1987.

His poems are characterized by German language word play, often at the level of single characters or phonemes. For example, his famous univocalic poem "Ottos Mops" (in English, "Otto's Pug") uses only the vowel "o". Of course, poems like this cannot easily be translated into other languages.

Most of his poems are better heard than read. His lectures were always known as very impressive events, because of the particular way he pronounced his poems. Poems like "schtzngrmm" (his version of the word "Schützengraben" which describes the trenches of the World War I) can be understood only if read correctly. It is an experimental poem in which he tells the sounds of war only with combinations of letters, which sound like gunfires or detonating missiles. [1]

Some other of his best-known poems are "lichtung" (also known as "lechts & rinks"[ sic ], in English "light & reft") and "kneiernzuck".

An example of a short poem, written in English: [2] 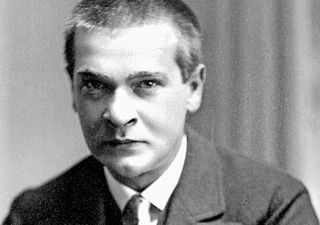 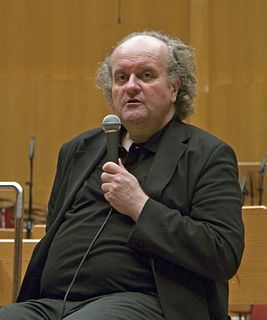 Gerhard Kofler was an Austrian-Italian writer. He wrote poetry and essays in both Italian and German. 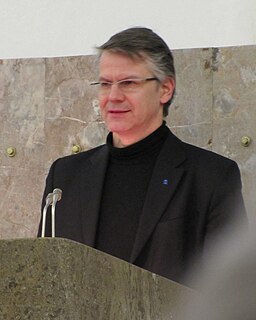 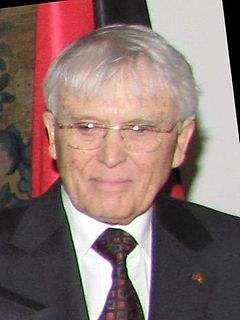 Reiner Kunze is a German writer and GDR dissident. He studied media and journalism at the University of Leipzig. In 1968, he left the GDR state party SED following the communist Warsaw Pact countries invasion of Czechoslovakia in response to the Prague Spring. He had to publish his work under various pseudonyms. In 1976, his most famous book The Lovely Years, which contained critical insights into the life, and the policies behind the Iron Curtain, was published in West Germany to great acclaim. In 1977, the GDR regime expatriated him, and he moved to West Germany (FRG). He now lives near Passau in Bavaria.

Friederike Mayröcker is an Austrian poet.

Jürg Amann was a Swiss author and dramatist. He has written radio plays, a biography of Robert Walser, and other works.

Peter-Huchel-Preis is a literature prize awarded in Baden-Württemberg, Germany. 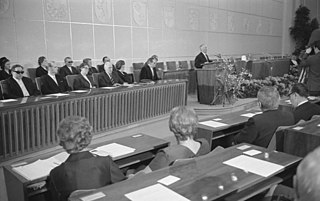 The Hörspielpreis der Kriegsblinden, also known as the Kriegsblindenpreis is the most important literary prize granted to playwrights of audio plays written in the German language. The award was established in 1950 by the Bund der Kriegsblinden Deutschlands e.V. (BKD), a German organization for soldiers and civilians blinded during war, whether from working with munitions or explosives or from a bomb attack or while in flight from an attack.

Ror Wolf was a German writer, poet, and artist who also published under the pseudonym Raoul Tranchirer. He wrote audio plays, novels, and poems and made collages.

lichtung is a poem of Austrian author Ernst Jandl, which combines deliberations about the directions left and right with a change of the letters l and r, so resulting in "lechts und rinks" instead of "rechts und links". It was published in Jandl's first volume of poems, Laut and Luise, in 1966 and, while it consists of just one stanza, it is among the most cited of Jandl's poetry. 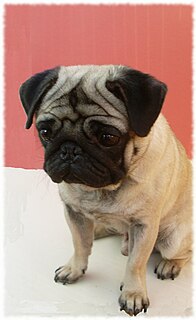 "Ottos mops" [Eng: Otto's pug] is a poem by the Austrian poet Ernst Jandl. It is thought to have been written on 20 November 1963 and was first published in 1970 in Jandl's volume Der künstliche Baum [Eng: the artificial tree]. The poem is made up of simple sentences of two to four words that contain exclusively the vowel "o". It tells the story of a short episode in the life of a dog and its owner: after Otto sends his badly behaved pug away, he begins to miss it and calls it back. The reaction of the returning pug is, however, not quite what is expected: it vomits. 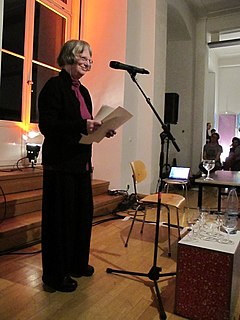