Last updated July 31, 2022
Not to be confused with Pierre Dupuy, otherwise known as Puteanus.

Erycius Puteanus (4 November 1574 – 17 September 1646) was a humanist and philologist from the Low Countries.

Erycius Puteanus is a latinization of his name, which was rendered in various ways, including Hendrick van den Putte (Put, Putten), Errijck (Eryck, Eerryck) de Put or Eric van der Putte. This was also Latinized as Ericus Puteanus. He was also known as Henry du Puy. [1]

He was born in Venlo and studied at the schools of Dordrecht and Cologne (College of the Three Crowns), where he took the degree of Master of Arts, 28 February 1595. He then followed, at Leuven, the lectures on ancient history given by Justus Lipsius.

In 1597 he travelled to Italy and met scholars, especially Cardinal Federigo Borromeo, through whom he was appointed professor of Latin at the Palatine School of Milan from 1600 to 1606. Then the States of Brabant offered him the chair left vacant by Lipsius at Leuven.

He taught at the Collegium Trilingue at the University of Leuven for forty years. He was loaded with favours by reigning princes: the Archduke Albert appointed him his honorary counsellor (1612), and increased his annual pension by 200 ducats (1614), adding the reversion of Château-César. At the same time he filled, after 1603, the post of historiographer to Philip III of Spain, on behalf of the Milanese, with other appointments. His outspoken language provoked political animosities, and he was almost driven into exile by request of King James I of England, who wrongly believed him to be the author of Corona Regia (1615), a scandalous satire about James's parentage and behaviour.

He fathered 17 children, and died in Leuven.

Puteanus was an encyclopedist; in one period of his literary activity (1603–19), he detached himself from Lipsius by aiming at personal leadership of a school. He then went back to chronological works. As a philologist some of his dissertations were reproduced in the Thesauri of Grævius and Gronovius.

Among his more than 90 works is a treatise on music, Modulata Pallas, which also appeared in four later substantially altered adaptations. One of these is Iter Nonianum, which was a comprehensive scholarly study of music theory. One distinctive feature is his extension of the Guidonian hexachord (ut, re, mi, fa, sol, la) with a seventh note bi, accompanied by a justifying cosmological and numerological emphasis on the number seven. [1]

Puteanus provided advice about naming features on the first telescopic lunar map produced by his friend Michael van Langren (1598-1675). [2] Van Langren named two features after him, the Aestuaria Bamelrodia and the crater Puteani. 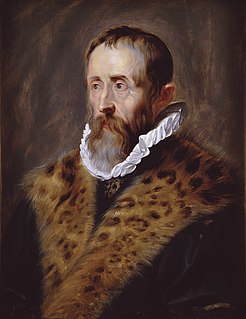 Justus Lipsius was a Flemish Catholic philologist, philosopher, and humanist. Lipsius wrote a series of works designed to revive ancient Stoicism in a form that would be compatible with Christianity. The most famous of these is De Constantia. His form of Stoicism influenced a number of contemporary thinkers, creating the intellectual movement of Neostoicism. He taught at the universities in Jena, Leiden, and Leuven.

Adriaan van Roomen, also known as Adrianus Romanus, was a mathematician, professor of medicine and medical astronomer from the Duchy of Brabant in the Habsburg Netherlands who was active throughout Central Europe in the late 16th and early 17th centuries. As a mathematician he worked in algebra, trigonometry and geometry; and on the decimal expansion of π. He solved the Problem of Apollonius using a new method that involved intersecting hyperbolas. He also wrote on the Gregorian calendar reform.

The Collegium Trilingue, often also called Collegium trium linguarum, or, after its creator Collegium Buslidianum, was founded in 1517 under the patronage of the humanist, Hieronymus van Busleyden. The three languages taught were Latin, Greek and Hebrew. It is located in Leuven, Belgium.

Michael van Langren, also known as Michiel Florent van Langren was an astronomer and cartographer of the Low Countries in the service of the Spanish Monarchy. His Latinized name is Langrenus.

The topography of the Moon is the mapping of the Moon's surface and the study of its shape. It has been measured by the methods of laser altimetry and stereo image analysis, including data obtained during several missions. The most visible topographical feature is the giant far side South Pole-Aitken basin, which possesses the lowest elevations of the Moon. The highest elevations are found just to the northeast of this basin, and it has been suggested that this area might represent thick ejecta deposits that were emplaced during an oblique South Pole-Aitken basin impact event. Other large impact basins, such as the maria Imbrium, Serenitatis, Crisium, Smythii, and Orientale, also possess regionally low elevations and elevated rims.

Govaert Wendelen, Latinized Godefridus Wendelinus, or sometimes Vendelinus was an astronomer from the County of Loon. His first name is variously given as Godefroy, Godefroid or Gottfried, his surname as Wendelin. The crater Vendelinus on the Moon is named after him.

Justus de Harduwijn, also written Hardwijn, Herdewijn, Harduyn or Harduijn, was a 17th-century Roman Catholic priest and poet from the Southern Netherlands. He was the poetic link between the Renaissance and the Counter-Reformation in the Netherlands.

Balthasar Moretus or Balthasar I Moretus was a Flemish printer and head of the Officina Plantiniana, the printing company established by his grandfather Christophe Plantin in Antwerp in 1555. He was the son of Martina Plantin and Jan Moretus.

Josse van der Baren was a Flemish painter of history paintings and a draughtsman active in the Leuven area around the turn of the 17th century.

Nicolaus Vernulaeus (1583–1649) was a professor at the University of Leuven and an important Neo-Latin playwright.

Jan Wames, Latinized Johannes Wamesius (1524—1590) was a professor of canon law at the University of Leuven.

Philip Rubens (1574–1611), was an antiquarian, librarian and philologist from the Low Countries. His younger brother was the painter Peter Paul Rubens. 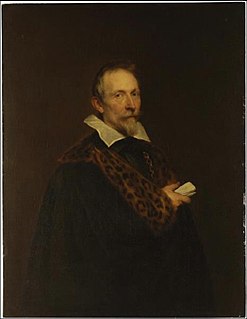 Joannes Woverius (1576-1636), the Latinized name of Jan van den Wouwer, was a civic and royal office-holder in the Spanish Netherlands.

John Gaspar Gevartius or Jan Caspar Gevaerts (1593-1666) was the jurisconsult of Antwerp and in his lifetime a famous philologist. He was a personal friend of Peter Paul Rubens.

Giacomo Micalori was an Italian theologian, philosopher and astronomer.

Alphonse Roersch (1870–1951) was a Belgian philologist, professor at the University of Ghent.

Events in the year 1638 in the Spanish Netherlands and Prince-bishopric of Liège.

Jan Leernout, Latinized Janus Lernutius (1545–1619) was a Latin poet from the Habsburg Netherlands.

Wikimedia Commons has media related to Erycius Puteanus .
This page is based on this Wikipedia article
Text is available under the CC BY-SA 4.0 license; additional terms may apply.
Images, videos and audio are available under their respective licenses.