European route E 80, also known as Trans-European Motorway or TEM, is an A-Class West-East European route, extending from Lisbon, Portugal to Gürbulak, Turkey, on the border with Iran. The road connects 10 countries and has a length of approximately 6,102 kilometres (3,792 mi). At its eastern end it joins end-on with Asian Highway AH1 which continues all the way to Japan. 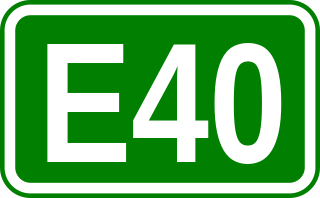 The international E-road network is a numbering system for roads in Europe developed by the United Nations Economic Commission for Europe (UNECE). The network is numbered from E1 up and its roads cross national borders. It also reaches Central Asian countries like Kyrgyzstan, since they are members of the UNECE.

Vitoria-Gasteiz is the seat of government and the capital city of the Basque Country and of the province of Álava in northern Spain. It holds the autonomous community's House of Parliament, the headquarters of the Government, and the Lehendakari's official residency. The municipality—which comprises not only the city but also the mainly agricultural lands of 63 villages around—is the largest in the Basque Country, with a total area of 276.81 square kilometres (106.88 sq mi), and it has a population of 252,571. The dwellers of Vitoria-Gasteiz are called vitorianos or gasteiztarrak, while traditionally they are dubbed babazorros.

U.S. Route 12 is an east–west United States highway, running from Aberdeen, Washington, to Detroit, Michigan, for almost 2,500 miles (4,000 km). The highway has mostly been superseded by Interstate 90 (I-90) and I-94, but unlike most U.S. routes that have been superseded by an Interstate, US 12 remains as an important link for local and regional destinations. The highway's western terminus is in Aberdeen, Washington, at an intersection with US 101, while the highway's eastern terminus is in Downtown Detroit, at the corner of Michigan and Cass avenues, near Campus Martius Park.

Alta Velocidad Española (AVE) is a service of high-speed rail in Spain operated by Renfe, the Spanish national railway company, at speeds of up to 310 km/h (193 mph). As of August 2017, the Spanish AVE system is the longest HSR network in Europe with 3,240 km (2,010 mi) and the second longest in the world, after China's. 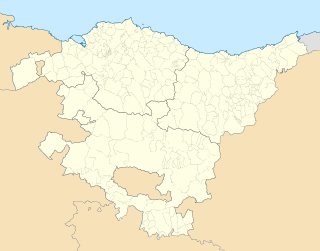 Durango is a town and municipality of the historical territory and province of Biscay, located in the Basque Country, Spain. It is the main town of Durangaldea, one of the comarcas of Biscay. Because of its economical activities and population, Durango is considered one of the largest towns in Biscay after the ones that compose the conurbation of Greater Bilbao. 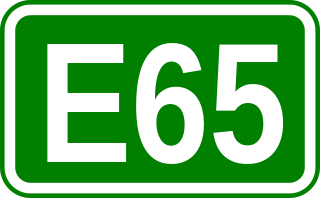 European route E65 is a north-south Class-A European route that begins in Malmö, Sweden and ends in Chania, Greece. The road is about 4,400 km (2,700 mi) in length.

Asian Highway 1 (AH1) is the longest route of the Asian Highway Network, running 20,557 km (12,774 mi) from Tokyo, Japan via Korea, China, Southeast Asia, Bangladesh, India, Pakistan, Afghanistan and Iran to the border between Turkey and Bulgaria west of Istanbul where it joins end-on with European route E80, running all the way to Lisbon, Portugal.

The Autovía A-1 is a Spanish autovía route which starts in Madrid and ends in Irun. It replaced the former national road from Madrid to France, the N-I. It carries the designation of European route E05, and, as one of the major north-south arteries of Spain, is one of the country's busiest highways.

The Adriatic Highway is a road that stretches along the eastern coast of the Adriatic Sea and is part of the European route E65. The road passes principally through Croatia, with smaller stretches through Bosnia and Herzegovina and Montenegro. It is an undivided two-lane road for almost its entire length, with the exception of a short stretch through Zadar and a 24 kilometres (15 mi) dual-carriageway section from Plano (Trogir) to the southeast suburbs of Split. The dual carriageway is planned to be extended further southeast to Omiš. Completion of the Adriatic Ionian motorway is proposed in order to replace the Adriatic highway as a high-performance road transport route along the Adriatic coast.

The European route E 15 is part of the United Nations international E-road network. It is a north-south "reference road", running from Inverness, Scotland south through England and France to Algeciras, Spain. Along most of its route between Paris and London, the road parallels the LGV Nord and High Speed 1. Its length is 2,300 miles (3,700 km).

European route E 851 is a road part of the International E-road network. It begins in Petrovac, Montenegro, passes through northern Albania and ends in Pristina, Kosovo. 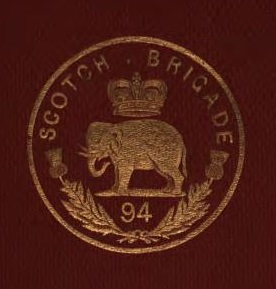 Gelson Dany Batalha Martins is a Portuguese professional footballer who plays as a winger for Ligue 1 club Monaco and the Portugal national team.

National Route 1 (N1) is a primary national route that forms part of the Philippine highway network, running from Luzon to Mindanao. Except for a 19-kilometer (12 mi) gap in Metro Manila and ferry connections, the highway is generally continuous. Most sections of N1 forms the Pan-Philippine Highway except for sections bypassed by expressways.