Dall'Abaco was born in Verona to renowned guitarist Damiano dall'Abaco. He is thought to have been a pupil of Torelli's from whom he would have learned violin and cello. [1]

He became a violinist with Tommaso Antonio Vitali in Modena, and in 1704 joined the court of Maximilian II Emanuel, Elector of Bavaria in Munich as Kammermusiker. [2] After only a few months, he fled with the court to Brussels following Maximilian's defeat at the Battle of Blenheim. When he went into exile with the court, he spent time in France and absorbed some of the influences there. On Maximilian's restoration and return to Munich in 1715, Dall'Abaco was appointed Concert-meister. He continued to compose chamber music at the French and Dutch courts until 1740, when he retired. [3] Dall'Abaco's music is especially indebted to Vivaldi and Corelli.

Arcangelo Corelli was an Italian violinist and composer of the Baroque era. His music was key in the development of the modern genres of sonata and concerto, in establishing the preeminence of the violin, and as the first coalescing of modern tonality and functional harmony.

Giuseppe Torelli was an Italian violist, violinist, teacher, and composer. 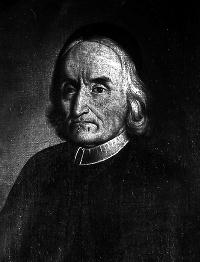 Francesco Antonio Bonporti was an Italian priest and amateur composer.

The year 1721 in music involved some significant events.

The year 1716 in music involved some significant events.

The year 1712 in music involved some significant events.

The year 1708 in music involved some significant musical events and new works.

Biagio Marini was an Italian virtuoso violinist and composer in the first half of the seventeenth century.

Giuseppe Valentini, nicknamed Straccioncino, was an Italian violinist, painter, poet, and composer, though he is known chiefly as a composer of inventive instrumental music. He studied under Giovanni Bononcini in Rome between 1692 and 1697. From 1710 to 1727 he served as ‘Suonator di Violino, e Componitore di Musica’ to Prince Michelangelo Caetani. He also succeeded Corelli as director of the concertino at San Luigi dei Francesi, from 1710 to 1741. Though during his lifetime overshadowed by the likes of Corelli, Vivaldi, and Locatelli, his contribution to Italian baroque music is noteworthy, and many of his works were published throughout Europe.

Joseph Abaco was an Italian violoncellist and composer. He was born and baptised in Brussels, the capital of the Spanish Netherlands, on 27 March 1710, and was musically trained by his father, Evaristo Felice dall'Abaco.

Tomaso Antonio Vitali was an Italian composer and violinist from Bologna, the eldest son of Giovanni Battista Vitali. He is known mainly for a chaconne in G minor for violin and continuo, which was published from a manuscript in the Sächsische Landesbibliothek in Dresden in Die Hoch Schule des Violinspiels (1867) edited by German violinist Ferdinand David. That work's wide-ranging modulations into distant keys have raised speculation that it could not be a genuine baroque work.

Carlo Tessarini, was an Italian composer and violinist in the late Baroque era.

Andrea Teodoro Zani was an Italian violinist and composer.

Giuseppe Maria Jacchini was an Italian cellist and composer.

Bruno Cocset is one of the most influential baroque cello players of this century. After studying in National Conservatory of Tours he received classes from Anner Bylsma, Jaap Schröder and Christophe Coin. He has worked with many of the most important "historically informed" groups of Europe, having recording mainly with Jordi Savall's Le Concert des Nations before he created his own baroque ensemble: Les Basses Réunies. He is very recognized for the "rescue" of forgotten composers such as Jean-Baptiste Barrière or Evaristo Felice Dall'Abaco, two examples of a vast corpus of recordings including innovative versions of Bach Cello Suites and Vivaldi Cello Concerti and Sonatas.

Concerto grosso in D major, Op. 6, No. 4, is a composition by Arcangelo Corelli, and was published as the fourth concerto in his Twelve Concerti Grossi, Op. 6 in 1714. This concerto grosso is the second most notable of the twelve, after No. 8, the famous Christmas Concerto. No. 4 is mainly notable for its overall joyfully charged sound, making it a frequently used example when demonstrating Corelli's renowned cantabile style.