The Evens /əˈvɛn/ (эвэн; pl. эвэсэл, evesel, in Even and эвены, eveny in Russian; formerly called Lamuts) are a people in Siberia and the Russian Far East. They live in regions of the Magadan Oblast and Kamchatka Krai and northern parts of Sakha east of the Lena River. According to the 2002 census, there were 19,071 Evens in Russia. According to the 2010 census, there were 22,383 Evens in Russia. They speak their own language called Even language, one of the Tungusic languages. The Evens are close to the Evenks by their origins and culture. Officially, they were considered to be of Orthodox faith since the 19th century, but the Evens managed to preserve different forms of non-Christian beliefs, such as shamanism. Traditional Even life is centred upon nomadic pastoralism of domesticated reindeer, supplemented with hunting, fishing and animal-trapping. There were 104 Evens in Ukraine, 19 of whom spoke Even. (Ukr. Cen. 2001)

The ancestors of the Evens were believed to have migrated from the Transbaikal area to the coastal areas of eastern Siberia. The economy was supplemented by winter hunts to obtain wild game. Hunters sometimes rode reindeer, sometimes moved along on wooden skis.

In the 17th century, the people today known as the Eveni were divided into three main tribes: the Okhotsk reindeer Tungus (Lamut), the Tiugesir, Memel’ and Buiaksir clans as well as a sedentary group of Arman’ speakers. Today, they are all known as Eveni. [3]

The traditional lodgings of the Evens were conical tents which were covered with animal skins. In the southern coastal areas, fish skins were used.[ citation needed ] Settled Evens used a type of earth and log dugout.[ citation needed ] Sheds were erected near the dwellings in order to house stocks of frozen fish and meat.

The Soviet years marked significant changes for the Evens. The Soviets created a written language for them and got rid of illiteracy among the Evens in the 1930s. Many nomadic Evens chose to settle down, joined the kolkhozes and engaged themselves in cattle-breeding and agriculture. 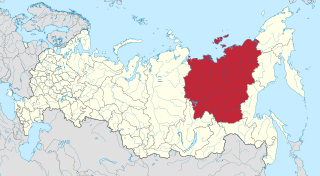 Sakha, also known as Yakutia or Yakutiya, and officially known as the Republic of Sakha (Yakutia), is a federal Russian republic. 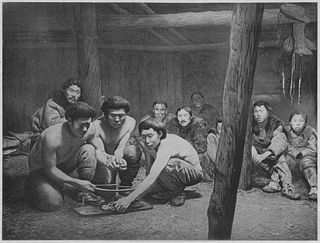 Koryaks are an indigenous people of the Russian Far East, who live immediately north of the Kamchatka Peninsula in Kamchatka Krai and inhabit the coastlands of the Bering Sea. The cultural borders of the Koryaks include Tigilsk in the south and the Anadyr basin in the north. 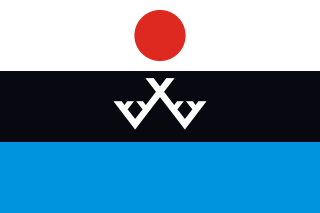 The Evenks are a Tungusic people of Northern Asia. In Russia, the Evenks are recognised as one of the indigenous peoples of the Russian North, with a population of 38,396. In China, the Evenki form one of the 56 ethnic groups officially recognised by the People's Republic of China, with a population of 30,875. There are 537 Evenks in Mongolia called Khamnigan in Mongolian language. 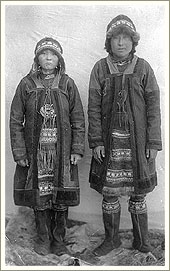 The Yukaghirs, or Yukagirs are a people in the Russian Far East, living in the basin of the Kolyma River.

The Khanty are a Ugrian indigenous people calling themselves Khanti, Khande, Kantek (Khanty), living in Khanty–Mansi Autonomous Okrug, a region historically known as "Yugra" in Russia, together with the Mansi. In the autonomous okrug, the Khanty and Mansi languages are given co-official status with Russian. In the 2010 Census, 30,943 persons identified themselves as Khanty. Of those, 26,694 were resident in Tyumen Oblast, of whom 17,128 were living in Khanty–Mansi Autonomous Okrug and 8,760—in Yamalo-Nenets Autonomous Okrug. 873 were residents of neighbouring Tomsk Oblast, and 88 lived in the Komi Republic.

The Nenets, also known as Samoyed, are a Samoyedic ethnic group native to northern arctic Russia, Russian Far North. According to the latest census in 2010, there were 44,857 Nenets in the Russian Federation, most of them living in the Yamalo-Nenets Autonomous Okrug, Nenets Autonomous Okrug and Taymyrsky Dolgano-Nenetsky District stretching along the coastline of the Arctic Ocean near the Arctic Circle between Kola and Taymyr peninsulas. The Nenets people speak either the Tundra or Forest Nenets languages, which are mutually unintelligible. In the Russian Federation they have a status of indigenous small-numbered peoples. Today, the Nenets people face numerous challenges from the state and oil and gas companies that threaten the environment and their way of life. As a result, many cite a rise in locally-based activism.

The Enets people are a Samoyedic ethnic group who live on the east bank, near the mouth, of the Yenisei River. Historically nomadic people, they now mainly inhabit the village of Potapovo in Krasnoyarsk Krai in western Siberia near the Arctic Circle. According to the 2010 Census, there are 227 Enets in Russia. In Ukraine, there were 26 Entsi in 2001, of whom 18 were capable of speaking the Enets language.

The Nivkh, or Gilyak, are an indigenous ethnic group inhabiting the northern half of Sakhalin Island and the lower Amur River and coast on the adjacent Russian mainland and historically possibly parts of Manchuria. 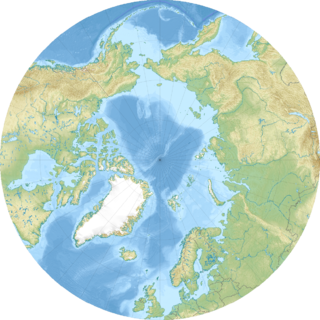 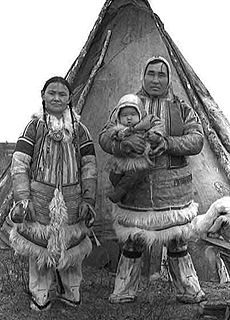 The Nganasans are a Uralic people of the Samoyedic branch native to the Taymyr Peninsula in north Siberia. In the Russian Federation, they are recognized as one of the indigenous peoples of the Russian North. They reside primarily in the settlements of Ust-Avam, Volochanka, and Novaya in the Taymyrsky Dolgano-Nenetsky District of Krasnoyarsk Krai, with smaller populations residing in the towns of Dudinka and Norilsk as well.

Dolgans are an ethnic group who mostly inhabit Krasnoyarsk Krai, Russia. They are descended from several groups, particularly Evenks, one of the indigenous peoples of the Russian North. They adopted a Turkic language sometime after the 18th century. The 2010 Census counted 7,885 Dolgans. This number includes 5,517 in former Taymyr Autonomous Okrug. There are 26 Dolgans in Ukraine, four of whom speak Dolgan. 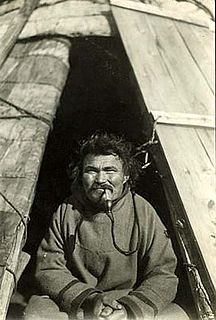 The Even language, also known as Lamut, Ewen, Eben, Orich, Ilqan, is a Tungusic language spoken by the Evens in Siberia. It is spoken by widely scattered communities of reindeer herders from Kamchatka and the Sea of Okhotsk in the east to the Lena river in the west, and from the Arctic coast in the north to the Aldan river in the south. Even is an endangered language, with only some 5,700 speakers. These speakers are specifically from the Magadan region, the Chukot region and the Koryak region. The dialects are Arman, Indigirka, Kamchatka, Kolyma-Omolon, Okhotsk, Ola, Tompon, Upper Kolyma, Sakkyryr and Lamunkhin.

The Dukha, Dukhans or Duhalar are a small Tuvan Turkic community of reindeer herders living in northern Khövsgöl Aimag of Mongolia. 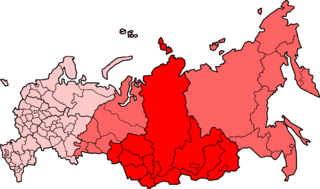 Including the Russian Far East, the population of Siberia is around 33 million people. As a result of the 17th to 19th century Russian conquest of Siberia and the subsequent population movements during the Soviet era, the demographics of Siberia today is dominated by native speakers of Russian. There remain a considerable number of indigenous groups, between them accounting for below 10% of total Siberian population, some of which are distantly genetically related to indigenous peoples of the Americas. 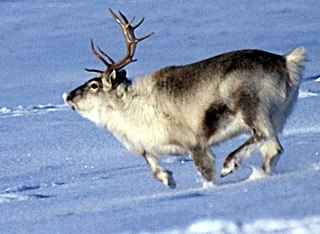 Reindeer in Siberian shamanism reflect the cultural, as well as the economic, relationship between the native peoples of Siberia, a region of Northern Asia, and the reindeer that live there. It involves the nomadic reindeer herders, those that hunt wild reindeer and those who maintain domesticated ones. Their religious beliefs reflect the spiritual philosophy of shamanism, and their traditions often involve reindeer in several steps of the process of practicing their religion. 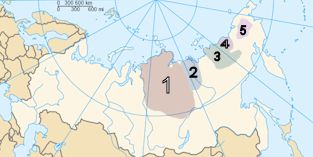 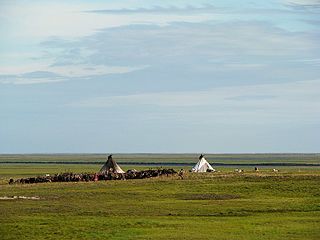 Reindeer herding is when reindeer are herded by people in a limited area. Currently, reindeer are the only semi-domesticated animal which naturally belongs to the North. Reindeer herding is conducted in nine countries: Norway, Finland, Sweden, Russia, Greenland, Alaska, Mongolia, China and Canada. A small herd is also maintained in Scotland.