Exmouth /ˈɛksmaʊθ/ is a town on the tip of the North West Cape and on Exmouth Gulf in Western Australia, 1,270 kilometres (789 mi) north of the state capital Perth and 3,366 kilometres (2,092 mi) southwest of Darwin.

The town was established in 1967 to support the nearby United States Naval Communication Station Harold E. Holt. It is named after Exmouth Gulf. Beginning in the late 1970s, the town began hosting United States Air Force personnel assigned to Learmonth Solar Observatory, a defence science facility jointly operated with Australia's Ionospheric Prediction Service. The town is served by Learmonth Airport.

In 1618, Dutch East India Company ship Mauritius , under command of Willem Janszoon, landed near North West Cape, just proximate to what would be Exmouth, and named Willem's River, which was later renamed Ashburton River.

The location was first used as a military base in World War II. US Admiral James F. Calvert in his memoir, Silent Running: My Years on a World War II Attack Submarine , and US Vice Admiral Charles A. Lockwood in Sink 'Em All, his narrative of Allied submarine warfare, describe its history. After the retreat from Java in March 1942, Allied naval forces had need of a forward base for replenishing submarines, then the sole form of offensive warfare against the Japanese. Both Darwin, Northern Territory, and Broome, Western Australia, were too exposed to air attack, so a 500-ton unmotorized lighter was placed as a refuelling barge near the mouth of Exmouth Gulf, where the Allies were already maintaining a seaplane tender.

Code-named "Potshot", the spartan base was also developed as an advanced base and rest camp for submariners using the tender USS Pelias. An airfield (now RAAF Learmonth) was constructed to provide fighter defence for the base. Z Special Unit used Potshot as a staging base for Operation Jaywick, a raid on Japanese shipping in Singapore Harbour, in September 1943. [2]

The town relies more on tourism than the station for its existence. At the 2016 census, Exmouth had a population of 2,486. [3] At the height of the tourist season, the population swells to 6,000.

Exmouth is popular for diving and snorkelling. [4] Some of the most famous snorkelling spots include Turquoise Bay and Oysters Stacks.

The Cape Range National Park, which has several gorges, is an area of 506 km2 (195 sq mi) and its main area is focused on the west coast of the Cape, which provides a large variety of camp sites on the coastal fringe of the Park. Yardie Creek and Charles Knife Gorge are land based attractions.

On 20 April 2023, Exmouth will be in the direct path of a total solar eclipse, which will be the first to be visible in Australia since November 2012. [5]

On 22 March 1999, Tropical Cyclone Vance reached category 5 status as it made landfall near Exmouth. This resulted in the highest wind gust ever reported on the Australian mainland, 267 km/h (166 mph) at Learmonth, 35 km (22 mi) to the south. Vance caused significant flooding and property damage. There were no casualties. [6] [7]

In April 2014, Exmouth was hit by a massive flash flood, nearly destroying the caravan park and seriously damaging much of the town's infrastructure, causing a severe blow to tourism in the region. [8]

Exmouth has a hot semi-arid climate (BSh). Temperatures often reach over 40 °C (104 °F) in summer; however, winters are warm with daytime temperatures around 25 °C (77 °F). There is no specific wet and dry season in Exmouth, although rain is most likely to fall between January and July, usually with monsoonal showers and storms from January to April and from the northern edges of cold fronts in May, June and July. The area occasionally gets caught by tropical cyclones. The period from August to December is usually dry.

Naval Communication Station Harold E. Holt is a joint Australian and United States naval communication station located on the north-west coast of Australia, 6 kilometres (4 mi) north of the town of Exmouth, Western Australia. The station is operated and maintained by the Australian Department of Defence on behalf of Australia and the United States and provides very low frequency (VLF) radio transmission to United States Navy, Royal Australian Navy and allied ships and submarines in the western Pacific Ocean and eastern Indian Ocean. The frequency is 19.8 kHz. With a transmission power of 1 megawatt, it is the most powerful transmission station in the Southern Hemisphere.

RAAF Base Learmonth, also known as Learmonth Airport, is a joint use Royal Australian Air Force base and civil airport. It is located near the town of Exmouth on the north-west coast of Western Australia. RAAF Base Learmonth is one of the RAAF's three bare bases. No RAAF units are currently based at Learmonth and it is maintained by a small caretaker staff during peacetime.

Severe Tropical Cyclone Vance was a tropical cyclone that struck Western Australia during the active 1998–99 Australian region cyclone season, and was also one of six tropical cyclones to form off the coast of Australia during that season. When making landfall the Learmonth Meteorological Office recorded the highest Australian wind gust of 267 km/h (166 mph). The previous highest gust was 259 km/h (161 mph) at nearby Mardie during Cyclone Trixie. This record was surpassed in 2010 after a world record wind-gust of 408 km/h (254 mph) at Barrow Island during Cyclone Olivia in 1996 was declared official by the World Meteorological Organisation.

North West Cape is a peninsula in the north-west of Western Australia. Cape Range runs down the spine of the peninsula and Ningaloo Reef runs along the western edge. It is in the Gascoyne region and includes the town of Exmouth. 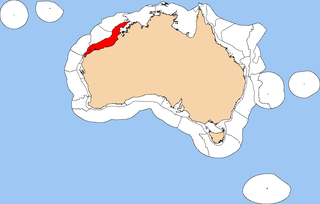 The Northwest Shelf Province, also known as Exmouth to Broome, is a biogeographic region of Australia's continental shelf. 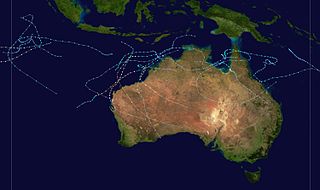 The 1995–96 Australian region cyclone season was an active Australian cyclone season, with Western Australia experiencing a record number of landfalling intense storms in the Pilbara region. The season produced a total of 19 tropical cyclones, of which 14 developed into named storms and 9 reached severe tropical cyclone status. The strongest of the season was Severe Tropical Cyclone Olivia, which also produced the highest recorded wind gust on record of 408 km/h (253 mph). Though several systems impacted land, the general sparsity of population centres in Australia limits the scale of damage. One person was confirmed to have been killed and cumulative losses were estimated at A$77 million (US$58.5 million). 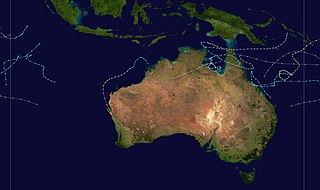 The 1978–79 Australian region cyclone season was the only season in which a reconnaissance aircraft flew into a tropical cyclone. Operationally, Australia's Bureau of Meteorology (BOM) tracked eleven tropical cyclones, while two additional systems were later added to the United States's Joint Typhoon Warning Center (JTWC) best track. Prior to 1985, the Australian region basin was defined as in the southern hemisphere between 80°E and 160°E, with the modern day season boundaries ranging from 1 November to 30 April of the following year. The first storm, an unnamed system, developed on 19 November 1978. The final cyclone, Kevin, dissipated by 12 May 1979. Tropical cyclones in this area were monitored by three Tropical Cyclone Warning Centres (TCWCs): the BOM in Perth, Darwin, and Brisbane. 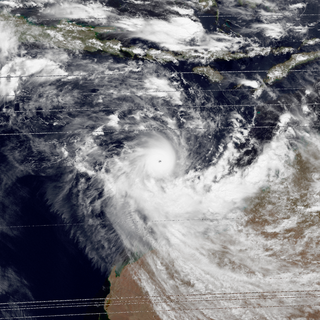 Severe Tropical Cyclone Gwenda is tied with Cyclone Inigo as the most intense Australian tropical cyclone on record, with a barometric pressure of 900 hPa (mbar) and was the most intense storm worldwide in 1999. Forming out of a tropical disturbance over the Arafura Sea on 2 April 1999, the precursor to Gwenda tracked slowly westward and gradually became more organised. On 4 April, the system developed into a Category 1 cyclone and was named Gwenda. It began to undergo explosive intensification the following day, and in a 30-hour span ending early on 7 April, the storm's maximum 10-minute sustained wind speed increased from 75 km/h (45 mph) to 225 km/h (140 mph) and its barometric pressure decreased to 900 hPa (mbar). The Joint Typhoon Warning Center reported that the storm had peaked as a high-end Category 4 equivalent on the Saffir–Simpson hurricane scale.

The 2018–19 Australian region cyclone season was an average season that saw the formation of 11 tropical cyclones, six of which intensified further to become severe tropical cyclones. The season officially began on 1 November 2018 and concluded on 30 April 2019; however, as evidenced by Tropical Low Liua in September 2018 and Tropical Cyclones Lili and Ann in May 2019, tropical cyclones can form at any time of the year. As such, any system existing between 1 July 2018 and 30 June 2019 would count towards the season total. During the season, tropical cyclones were officially monitored by the Bureau of Meteorology (BOM), the Indonesian Agency for Meteorology, Climatology and Geophysics (BMKG) in Jakarta, Indonesia, and the National Weather Service of Papua New Guinea in Port Moresby. The United States' Joint Typhoon Warning Center (JTWC) in Hawaii, and other national meteorological services such as MetService in New Zealand, Météo-France at La Réunion, and the Fiji Meteorological Service (FMS), also monitored parts of the basin during the season in an unofficial capacity.

Vlamingh Head Lighthouse is a lighthouse which is situated 17 km (11 mi) to the north of the settlement of Exmouth, Western Australia, overlooking Lighthouse Bay. The lighthouse is notable as being one of the few locations in Australia where both the sunrise and the sunset can be observed. 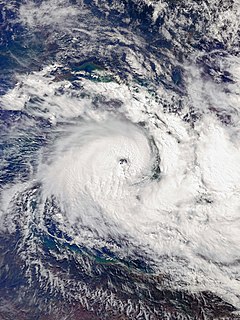 Severe Tropical Cyclone Nora was a strong tropical cyclone that affected Far North Queensland and the northeastern Northern Territory during March 2018. The ninth named storm and third severe tropical cyclone of the 2017–18 Australian region cyclone season, Nora developed from a tropical low which formed near the Torres Strait on 19 March. The system initially moved quickly to the west-northwest, and then began tracking slowly southwestwards over the Arafura Sea while gradually developing. A turn to the east on 22 March brought the tropical low into a favourable environment for strengthening, and the system reached tropical cyclone intensity later that day. Nora then underwent a period of rapid intensification as it moved southeastwards into the Gulf of Carpentaria. The storm peaked on 23 March as a high-end Category 3 severe tropical cyclone with sustained winds of 155 km/h (100 mph) and a minimum barometric pressure of 958 hPa (28.29 inHg). Nora made landfall north of Pormpuraaw at about 13:00 UTC on 24 March as a minimal Category 3 system. Nora weakened steadily as it tracked southwards along the coast, and was downgraded to a tropical low the following day. Nora's remnants meandered over land for several days before moving back over the Gulf of Carpentaria and dissipating on 28 March.

The following is a list of all reported tropical cyclones within the Australian region between 90°E and 160°E, after the start of World War II in September 1939 and before the start of the satellite era during the 1969–70 Season.

The following is a list of Australian region tropical cyclones from 1900 to 1910.

Wikivoyage has a travel guide for Exmouth, Western Australia .
This page is based on this Wikipedia article
Text is available under the CC BY-SA 4.0 license; additional terms may apply.
Images, videos and audio are available under their respective licenses.