Expresso (Portuguese pronunciation:  [(ɐi̯)ˈʃpɾɛsu] ) is a flagship weekly publication of the Impressa Group for Portugal. [1]

Expresso was first published on 6 January 1973. [2] [3] The founder was Francisco Pinto Balsemão. [4] [5] The paper is based in Lisbon [4] and is published on a weekly basis. [6] The newspaper is part of the Portuguese company Impresa, [7] [8] which also controls various magazines, including Caras and Visão , among the others. [9]

A weekly newspaper, it incorporates various supplements, covering general news, business, sports, international news, entertainment, society, a magazine, recruitment and real estate classified supplements, as well as having a site on the Internet. It is particularly known for its editorial independence and its probing political reporting. [1] [13]

The Prémio Pessoa is a notable Portuguese award instituted in 1987 by Expresso and the Unisys Company. It is one of the most reputed prizes awarded in Portugal, named after the poet Fernando Pessoa. In 1980 Expresso, in partnership with SDG – Simuladores e Modelos de Gestão – created the Global Management Challenge, a strategic management competition for university students.

The Corriere della Sera is an Italian daily newspaper published in Milan with an average daily circulation of 410,242 copies in December 2015. 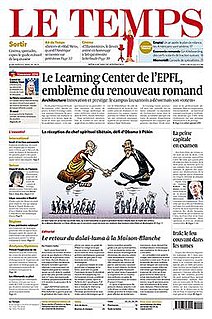 Jornal de Notícias (JN) is a Portuguese daily national newspaper, one of the oldest in Portugal. 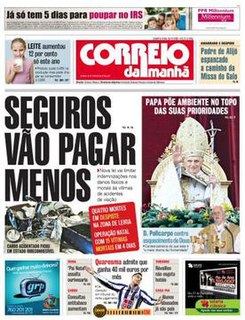 Hufvudstadsbladet is the highest-circulation Swedish-language newspaper in Finland. Its headquarters is located in Helsinki, the capital of Finland. The name of the newspaper translates approximately into "Journal of the Capital", hufvudstad being the 19th-century Swedish spelling for capital. The newspaper is informally also called Husis or Höblan.

Público is a Portuguese daily national newspaper of record published in Lisbon, Portugal.

Les Echos is the first daily French financial newspaper, founded in 1908 by the brothers Robert and Émile Servan-Schreiber. It is the main competitor of La Tribune, a rival financial paper.

Impresa is a Portuguese media conglomerate, headquartered in Paço de Arcos, in Oeiras municipality. It is the owner of SIC TV channel, and Expresso newspaper, among other leading media, like several magazine publications. A third online business segment was launched under the name Impresa Digital.

Diário de Notícias is a Portuguese daily newspaper published in Lisbon, Portugal. The paper is considered a newspaper of record for Portugal.

Blitz is a Portuguese media brand that focus on popular music and pop culture, based in Paço de Arcos. Since February 2018, the brand is present only on digital media and sporadic, special printed editions. Between November 1984 and April 2006, Blitz took the form of a weekly newspaper. Later, between June 2006 and January 2018, Blitz was issued as monthly magazine. It was one of the early music publications in Portugal.

Expansión is a Spanish economic and business newspaper published in Madrid, Spain. 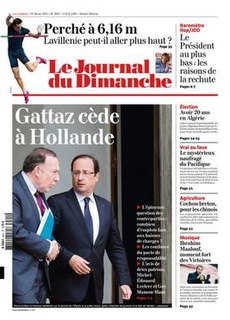 European Newspaper Award is a design competition for European newspapers. The competition was founded and is organized by newspaper designer Norbert Küpper from Meerbusch, Germany. He co-operates with the journalist magazines Medium Magazin (Frankfurt), Der Österreichische Journalist (Salzburg), and Schweizer Journalist (Oberuzwil). The first winners were announced in 1999.

El Economista is a Spanish daily newspaper which focuses on economical, financial and business affairs. The daily is headquartered in Madrid, Spain.

Diário Económico was a print Portuguese business newspaper based in Lisbon, Portugal. On 18 March 2016, the paper published the last print edition and went on online.

Observador is a Portuguese online newspaper started on May 19, 2014. It is the only Portuguese newspaper in Portugal with a defined political orientation.