Ezzat el Kamhawi (Arabic : عزت القمحاوي‎) is an Egyptian novelist and journalist. In December 2012, el Kamhawi was awarded the Naguib Mahfouz Medal for Literature for his novel House of the Wolf . [1]

He was born in 1961 and graduated from the department of journalism in the Faculty of Mass Communications, Cairo University in 1983.

El Kamhawi was born on 23 December 1961 in Sharqia Governorate, Egypt, before graduating from high school he had articles published for him in the Al Gomhuria newspaper.

After graduating from the department of journalism in the Faculty of Mass Communications, Cairo University, he started working for Al-Akhbar , where he helped establish Akhbar Al-Adab 10 years later, a widely known literature magazine. He was the Senior Editor of al-Doha Cultural Magazine from May 2011 [2] until September 2013. [3]

The City of Pleasure

Main article: The City of Pleasure

A city like no other, guarded by the goddess of pleasure and, ruled by a licentious king who dedicated his time to carnal pleasures and a princess who dreams of love and tender empathy. The priests decide to design the walls of the princess's room with figures of embracing lovers and burnt incense and chanted their magical incantations that the pictures on the wall may come to life and the dream of the princess for true love might come true.

People real and shadowy, strong slaves and emperors have met their doom at the gates of the City of Pleasure. Eventually the gates of the impenetrable city succumbs under the charm of two ingenious commodities: fried potatoes and pepsi-cola. No one knows the real history of the City of Pleasure and no welcome visitor has ever escaped its enchantment.

This is the novel that has been structured from human myths melted down and recreated one of the most perfectly executed literary whims. It is no longer possible to speak of modern Arabic literary narrative without including The City of Pleasure and the enriching addition it has provided to the art of the modern Arabic novel par excellence.

His published literary works include:

Ahlem Mosteghanemi, alternatively written Ahlam Mosteghanemi is an Algerian writer who has been called "the world's best-known arabophone woman novelist". 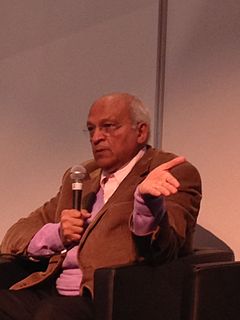 Gamal al-Ghitani, was an Egyptian author of historical and political novels and cultural and political commentaries and was the editor-in-chief of the literary periodical Akhbar Al-Adab till 2011.

Muhammad Aladdin, also known as Alaa Eddin is an Egyptian novelist, short story writer, and script writer. His first collection of short stories was published in 2003, and he is the author of five novels—The Gospel According to Adam, The Twenty-Second Day, The Idol (novel), The Foot (novel), and A Well-Trained Stray—and four short story collections—The Other Shore, The Secret Life of Citizen M, Young Lover, New Lover, and The Season of Migration to Arkidea.

Reem Bassiouney is an Egyptian author and professor of sociolinguistics, currently teaching at The American University in Cairo. She has written several novels and a number of short stories and won the 2009 Sawiris Foundation Literary Prize for Young Writers for her novel Dr. Hanaa. While a substantial amount of her fiction has yet to be translated into English, her novel The Pistachio Seller was published by Syracuse University Press in 2009, and won the 2009 King Fahd Center for Middle East and Islamic Studies Translation of Arabic Literature Award. Bassiouney also won Naguib Mahfouz Award from Egypt's Supreme Council for Culture in the best Egyptian novel category for her best selling novel, The Mamluk Trilogy.

The City of Pleasure Arabic: مدينة اللذة‎ is Ezzat el Kamhawi's first novel, and second book after It Happened in the land of Dust and Mud (stories). It was first released by the General Organization for Cultural Centers in 1997, second edition by el-Ain publishing in 2009. In his novel, Kamhawi attempted to personify an entire city where he deals with issues related to love and sex. The characters are portrayed as simple passerby who narrate the city's story and who live in it, with it and for it.

The Guard is Ezzat el Kamhawi's third novel, and sixth book, released by el-Ain publishing in 2008. 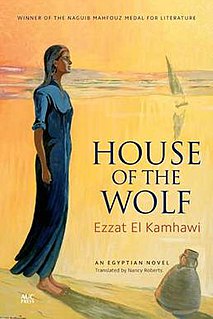 House of the Wolf is Ezzat el Kamhawi's fourth novel and eighth book. It was first released in Arabic language in 2010 by Dar Al-Adab in Beirut.

The Naguib Mahfouz Medal for Literature is a literary award for Arabic literature. It is given to the best contemporary novel written in Arabic, but not available in English translation. The winning book is then translated into English, and published by American University in Cairo Press. It was first awarded in 1996 and is presented annually on December 11, the birthday of Nobel laureate Naguib Mahfouz, by the President of the American University in Cairo.

May Telmissany is an Egyptian-Canadian novelist, translator, film critic and academic born in Cairo, Egypt, on 1 July 1965. She now teaches Arabic studies and cinema at the University of Ottawa in Ottawa, Ontario, Canada.

Youssef Rakha is an Egyptian writer. His work explores language and identity in the context of Cairo, and reflects connections with the Arab-Islamic canon and world literature. He has worked in many genres in both Arabic and English, and is known for his essays and poems as well as his novels. 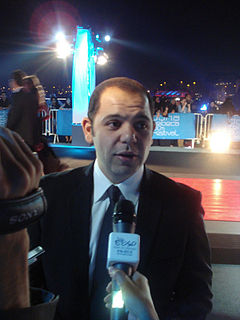 Ramy Imam is an Egyptian director, and producer.

Rana al-Tonsi is an Egyptian writer and poet. 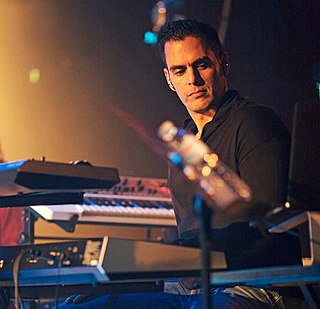 Hisham Kharma is an Egyptian Music producer, Creative director, known for his live concerts in the Cairo Opera House, for his 2012 album AlyaQeen, the soundtrack for The End, and for his soundtrack for Egypt: Land of Civilization documentary that was premiered during the Pharaohs' Golden Parade and starring Khaled El Nabawy.

Shaban Yusuf is an Egyptian writer, poet, critic and researcher. He is the founder of Olive Literary Workshop forum and Kitabat magazine. He published seven poetry collections, a play, critical books and research papers. He was the editor-in-chief of Kitabat Jadidah series, and the supervisor of Manarat al-Nadim literary magazine. He also wrote for a number of newspapers, including El Tahrir and Akhbar Al-Adab newspapers. Yusuf is known for his pursuit to bring marginalized poets and female authors to light. Additionally, he contributed in the field of media production by helping prepare and present television programs, such as Assir Al-Kotob,Soor Elazbakeya and Al-Maqha Al-Thaqafi. Yusuf is currently working as the editor-in-chief for Alam Al-Kotob magazine, and on publishing a new book, titled “Mustafa Mahmoud’s Broken Secularism.”

Nabil Naoum is an Egyptian writer and critic. He was born in Cairo, in 1944. He studied Engineering in Cairo University and then went to the United States, where he worked as an engineer in New York for ten years. In 1979 he returned to Cairo, where he opened a gallery for modern art and turned more seriously towards writing. Since 2000, Naoum has been a member of the selection committee of the Biennale for Arabic Film at the Arab World Institute in Paris. he was married to Suzanne El Masry and his daughter is the famous screenwriter Mariam Naoum.

El Sayed Yassin was an Egyptian political and social writer and intellectual. He was born in Alexandria on 30 October 1931.

Muhamed Mechbal is a Moroccan academic and critic. He is currently the head of Rhetoric and Discourse Analysis team is the College of Arts in Abdelmalek Essaadi University in Tétouan. He won the King Faisal International Prize in Arabic language and literature in its 43rd round in 2021.

Khalid Al-Shaybani is an Egyptian poet, novelist, and screenwriter born in December 1979. He studied media at the Faculty of Arts and specialized in journalism and worked in many Egyptian and Arabic newspapers and magazines, and later on he devoted himself to literary and artistic writings.

Ahmad Magdy Hammam is an Egyptian novelist, storyteller and a journalist. He was born in the United Arab Emirates on 9 April 1983. He moved to Cairo in 2000, and he started working in the cultural press since 2010. He has published works in the Egyptian and the Arab periodicals, publications, and websites, including (Al-Ahram and Akhbar elyom, Albawabh News, Al-Dostor, Alhayat News, Al-Akhbar News and Al-Quds News. He worked as the editor-in-chief of the "World of Book" magazine, issued by the Egyptian Ministry of Culture, represented by the Egyptian General Book Authority. He has published many fictional and short stories. Also, he won many awards and honors, and participated in many cultural and artistic conferences and events in Egypt and abroad.