The Fédération Internationale d'Escrime (English: International Fencing Federation), commonly known by the acronym FIE, is the international governing body of Olympic fencing. Today, its head office is at the Maison du Sport International in Lausanne, Switzerland. The FIE is composed of 157 national federations, [1] each of which is recognized by its country's Olympic Committee as the sole representative of Olympic-style fencing in that country.

Since its inception in 1913, there have been fourteen different presidents. The current president of the federation is Alisher Usmanov.

The Fédération Internationale d'Escrime is the heir of the Société d'encouragement de l'escrime founded in France in 1882, which took part in the global movement of structuring sport. [2] The first international fencing congress was held in Brussels, Belgium in 1897 at the instigation of the Fédération belge des cercles d'escrime, followed by another one in Paris in 1900. [3] On this occasion the Société organised one of the first international fencing events; French, Italian, Spanish, and Belgian fencers attended the competition. [4] Dissensions rapidly arose between epeists and foilists, which held the majority at the Société. The third congress held in Brussels in 1905 voted the creation of an international fencing committee whose mission would be of fostering friendship amongst all fencers, establishing national rules, and supporting the organization of fencing competitions. [5] The 3rd congress also adopted the French rules as the basis for upcoming international competitions. New tensions appeared, this time between France and Italy, about the regulatory weapon grip. They led to the boycott by France of the fencing events of the 1912 Olympic Games. [6] A new international congress was called together in Ghent, Belgium, in July 1913. The main matter was the adoption of international regulations for each of the three weapons. The French rules were adopted in épée and foil; the Hungarian rules were chosen for sabre. [7] Frenchman René Lacroix also campaigned for the creation of an international fencing federation.

The Fédération Internationale d'Escrime was founded on November 29, 1913, in the conference rooms of the Automobile Club de France in Paris. [8] The nine founding nations were Belgium, Bohemia (now the Czech Republic), France, Great Britain, Hungary, Italy, the Netherlands, and Norway. Albert Feyerick, president of the Federation of fencing clubs of Belgium, was elected as the first president. The FIE held its first congress on June 23, 1914, and accepted the adhesion of seven new countries: Austria, Denmark, Monaco, Romania, Russia, Switzerland, and the United States. [9]

The FIE assists the International Olympic Committee in the organization of fencing events at the Summer Olympics. The number of events is a matter of contention between the FIE and the CIO since the introduction of women's sabre at the 1999 World Championships: since then, the World Championships feature twelve events–an individual and a team weapon for each of the three weapons, for men and for women. However, the CIO refuses to increase the number of Olympic medals allocated to fencing. After much dithering, the FIE decided to organize all six individual events, but only four team events decided on a rotational basis. The two team events excluded from the Olympic programme, one for men and one for women, compete instead in World championships. [10]

Presidents of the FIE

Note:As of 7 July 2012 [update] , the Netherlands Antilles is still listed as an FIE Member nation, and 146 member nations are listed on the FIE's membership page. However, after the country was dissolved, it lost its National Olympic Committee status in 2011. At the 2012 Olympics, athletes from the former Netherlands Antilles were eligible to participate as independent athletes under the Olympic flag (no fencers competed).

Paul Anspach was a Belgian épée and foil fencer who competed in four consecutive Olympics.

The 2002 World Fencing Championships were held in Lisbon, Portugal. The event took place from August 18 to August 23, 2002.

The 1969 World Fencing Championships were held in Havana, Cuba. The event took place from September 30 to October 12, 1969, at the Ciudad Deportiva Coliseum.

The 1989 World Fencing Championships were held in Denver, United States from July 5 to July 15.

Weston "Seth" Kelsey is an American épée fencer and three time Olympic fencer. He competed at three Olympiads: 2004, 2008 and 2012. He finished 4th in the individual competition at the 2012 London Olympics.

The Italian Fencing Federation is the national governing body for the fencing sport in Italy. The FIS is currently based in Rome. The FIS was founded is 1909 and was one of the nine founding nations of The Fédération Internationale d'Escrime (FIE) in 1913. The FIS has in total achieved 219 metals at Euro Championships, 319 medals at the World Championships and 123 Olympic medals. FIS is funded mainly by sponsors among which are Kinder. 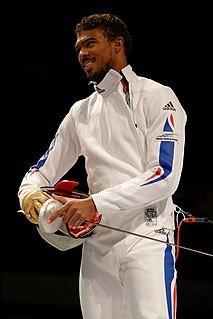 Enzo Lefort is a French foil fencer, bronze medal in the 2014 World Championships, European and World team champion in 2014.

Alina Ivanivna Komashchuk is a Ukrainian sabre fencer. Competing in team events, she is the 2013 World champion and 2016 Olympic silver medalist.

The fencing competitions at the 2020 Summer Olympics in Tokyo will feature 12 events, the first time that both team and individual events have been held in all three weapons for both men and women.

The Romanian Fencing Federation is the governing body for the sport of fencing in Romania. Affiliated to the Federation Internationale d'Escrime since 1914, it is a member of the European Fencing Confederation and of the Romanian Olympic and Sports Committee.

The Fencing Federation of South Africa is the governing body that regulates and oversee the Olympic sport of fencing in South Africa. Affiliated to the South African Sports Confederation and Olympic Committee, the body is responsible for organizing fencing competitions locally and selecting fencers for international competitions.

The following is the qualification system and qualified countries for the Fencing at the 2019 Pan American Games competitions.

Aida Khasanova is an Uzbekistani fencer and international fencing referee. She is Uzbekistani fencing champion on foil of 1998, 1999, 2000, 2002 and won Uzbekistan Cup on saber in 2008. She competed in the individual foil events at the World Championships in Saint Petersburg, Russia in 2007 and Turin, Italy in 2006 representing Uzbekistan.