The Fête de la Fédération (Festival of the Federation) was a massive holiday festival held throughout France in 1790 in honour of the French Revolution. It is the precursor of the Bastille Day which is celebrated every year in France on 14 July, celebrating the Revolution itself, as well as National Unity.

It commemorated the revolution and events of 1789 which had culminated in a new form of national government, a constitutional monarchy led by a representative Assembly.

The inaugural fête of 1790 was set for July 14th, so it would also coincide with the first anniversary of the storming of the Bastille although that is not what was itself celebrated. At this relatively calm stage of the Revolution, many people considered the country's period of political struggle to be over. This thinking was encouraged by counter-revolutionary monarchiens , and the first fête was designed with a role for King Louis XVI that would respect and maintain his royal status. The occasion passed peacefully and provided a powerful, but illusory, image of celebrating national unity after the divisive events of 1789–1790.

After the initial revolutionary events of 1789, France's ancien régime had shifted into a new paradigm of constitutional monarchy. By the end of that year, towns and villages throughout the country had begun to join together as fédérations, fraternal associations which commemorated and promoted the new political structure. [1] A common theme among them was a wish for a nationwide expression of unity, a fête to honour the Revolution. Plans were set for simultaneous celebrations in July 1790 all over the nation, but the fête in Paris would be the most prominent by far. It would feature the King, the royal family, and all the deputies of the National Constituent Assembly, with thousands of other citizens predicted to arrive from all corners of France.

The event took place on the Champ de Mars, which was at the time far outside Paris. The vast stadium had been financed by the National Assembly, and completed in time only with the help of thousands of volunteer laborers from the Paris region. During these "Wheelbarrow Days"(journée des brouettes), the festival workers popularised a new song that would become an enduring anthem of France, Ah! ça ira . [2]

Enormous earthen stands for spectators were built on each side of the field, with a seating capacity estimated at 100,000. [3] The Seine was crossed by a bridge of boats leading to an altar where oaths were to be sworn. The new military school was used to harbour members of the National Assembly and their families. At one end of the field, a huge tent was the king's step, and at the other end, a triumphal arch was built. At the centre of the field was an altar for the mass.

The feast began as early as four in the morning, under a strong rain which would last the whole day (the Journal de Paris had predicted "frequent downpours").

Fourteen thousand fédérés came from the province, every single National Guard unit having sent two men out of every hundred. They were ranged under eighty-three banners, according to their département. They were brought to the place where the Bastille once stood, and went through Saint-Antoine, Saint-Denis and Saint-Honoré streets before crossing the temporary bridge and arriving at the Champ de Mars.

A mass was celebrated by Charles Maurice de Talleyrand, bishop of Autun. At this time, the first French Constitution was not yet completed, and it would not be officially ratified until September 1791. But the gist of it was understood by everyone, and no one was willing to wait. Lafayette led the President of the National Assembly and all the deputies in a solemn oath to the coming Constitution:

Afterwards, Louis XVI took a similar vow: "I, King of the French, swear to use the power given to me by the constitutional act of the State, to maintain the Constitution as decreed by the National Assembly and accepted by myself." [5] The title "King of the French", used here for the first time instead of "King of France (and Navarre)", was an innovation intended to inaugurate a popular monarchy which linked the monarch's title to the people rather than the territory of France. The Queen Marie Antoinette then rose and showed the Dauphin, future Louis XVII, saying: "This is my son, who, like me, joins in the same sentiments." [6]

The festival organisers welcomed delegations from countries around the world, including the recently established United States. John Paul Jones, Thomas Paine and other Americans unfurled their Stars and Stripes at the Champ de Mars, the first instance of the flag being flown outside of the United States. [7]

After the end of the official celebration, the day ended in a huge popular feast. It was also a symbol of the reunification of the Three Estates, after the heated Estates-General of 1789, with the Bishop (First Estate) and the King (Second Estate) blessing the people (Third Estate). In the gardens of the Château de La Muette, a meal was offered to more than 20,000 participants, followed by much singing, dancing, and drinking. The feast ended on the 18 July.

Bastille Day is the common name given in English-speaking countries to the national day of France, which is celebrated on 14 July each year. In French, it is formally called la Fête nationale and commonly and legally le 14 juillet. 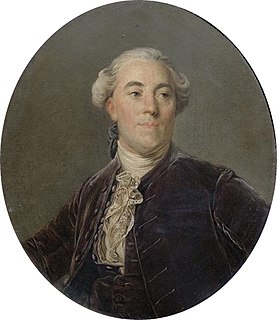 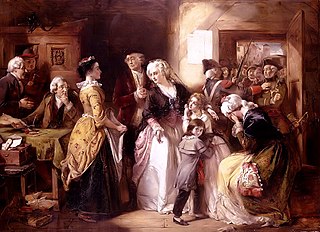 The royal Flight to Varennes during the night of 20–21 June 1791 was a significant episode in the French Revolution in which King Louis XVI of France, his queen Marie Antoinette, and their immediate family unsuccessfully attempted to escape from Paris in order to initiate a counter-revolution at the head of loyal troops under royalist officers concentrated at Montmédy near the frontier. They escaped only as far as the small town of Varennes, where they were arrested after having been recognized at their previous stop in Sainte-Menehould. 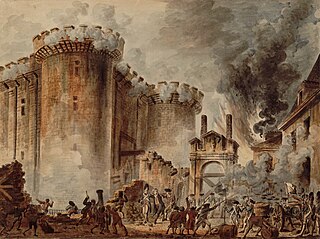 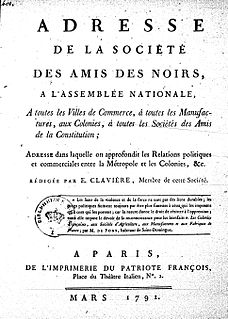 Jean-Nicolas Démeunier was a French author and politician.

The Secretary of State of the Maison du Roi was the secretary of state in France during the "Ancien Régime" and Bourbon Restoration in charge of the Département de la Maison du Roi. The exact composition of the ministry and the secretary's duties changed several times over the Early Modern period, but in general, the Département de la Maison du Roi oversaw four main areas: the "Maison du Roi", the "Bâtiments du Roi", the General Affairs of the Clergy, Affairs of the RPR, and the administration of the capital city of Paris and the provinces. The post later reappeared as the Minister for the Maison du Roi.

The Menus-Plaisirs du Roi was, in the organisation of the French royal household under the Ancien Régime, the department of the Maison du Roi responsible for the "lesser pleasures of the King", which meant in practice that it was in charge of all the preparations for ceremonies, events and festivities, down to the last detail of design and order.

Thomas-François de Treil de Pardailhan was the eldest of an ennobled Languedocien family, originating in the Saint-Pons-de-Thomières region. At first an officer in the Maison Militaire du Roi, baron Thomas de Treil de Pardailhan was Maître d'hôtel du Roi at the Court of Versailles at the end of the Ancien Régime. His writings, however, show him as an opponent of the privileges of aristocracy and in favor of the new ideas. The French Revolution marks a rupture with his milieu: in support of deep social reform, he was elected député for Paris in 1791 to the Legislative Assembly, but always remained attached to the idea of a constitutional monarchy and was imprisoned as a suspect during the Reign of Terror. Ruined by bad business dealings under the Directory and by sources of income he had lost in the Revolution, he ended his life at his château at Pardailhan in 1822.

Le National was a French daily founded in 1830 by Adolphe Thiers, Armand Carrel, François-Auguste Mignet and the librarian-editor Auguste Sautelet, as the mouthpiece of the liberal opposition to the Second Restoration.

The Club Breton was a group of Bretons representatives attending the Estates General of 1789 in France.