Lieutenant-Colonel Frederick John Marrian Stratton DSO OBE DL TD FRS PRAS [1] (16 October 1881 – 2 September 1960) was a British astrophysicist, Professor of Astrophysics (1909) at the University of Cambridge from 1928 to 1947 and a decorated British Army officer.

The youngest of six sons and two daughters, Stratton was born at Edgbaston in Birmingham, to Stephen Samuel Stratton, a music critic and historian, and Mary Jane Marrian. He remembered Dvorak and Ebenezer Prout visiting his father. In 1891, he received a scholarship to King Edward's Grammar School in Five Ways, Birmingham, advanced to Mason College in 1897 (which later became the University of Birmingham) and won an entrance scholarship to Gonville and Caius College, Cambridge, in 1900, entering the university in October 1901. [1] He took a London BA (External) in Greek, Latin and maths in 1903, and graduated in 1904 with the distinction of Third Wrangler in Part I of the Mathematical Tripos (Arthur Eddington, later Sir Arthur, was Senior Wrangler that year). He was placed in Class I, Division II of the second part of the Tripos the following year, also receiving the Tyson Medal in astronomy and an Isaac Newton Studentship. In 1906 he won a Smith's Prize and was elected a Fellow of his college, which he remained until his death. [1]

In 1901, Statton had joined the Caius Company of the Cambridge University Rifle Volunteers, which became the Cambridge University Officers Training Corps in 1908. Partly instrumental in forming the Communications (later Signals) Company as a cadet corporal, he was commissioned a second lieutenant in the Territorial Army on 17 August 1910. [2] A provisional captain in the unit when war erupted in 1914, he was commissioned a temporary captain in the Corps of Royal Engineers on 8 September 1914. [3] As a temporary major, he became Officer Commanding (Signals) of the 20th Divisional Signal Company, Royal Engineers, and took his company to France in the summer of 1915 to join the BEF. [1] He was awarded a DSO in 1917 and promoted to acting lieutenant-colonel on 22 July, [4] becoming Assistant Director Signals (later chief signals officer) of the 19th Corps BEF under Lt-Gen. Watts. He was praised by his fellow officers for his efficiency and perpetual cheerfulness, managing to remain alert even after days without sleep, and was mentioned in despatches five times. [1] On 29 January 1919, Stratton was appointed a knight of the Légion d'honneur of France. [5]

Upon returning to Cambridge in 1919 with the rank of major (brevet lieutenant-colonel), he re-formed the signals section of the Officers Training Corps, and commanded it until 1928. For his military service, he was appointed an Officer of the Order of the British Empire, Military Division (OBE) in the 1929 King's Birthday Honours list. [6] In 1921, Stratton became the University representative for the Cambridgeshire Territorial Army Association, serving as its president from 1934 to 1940. [1]

Although nearly 60 when war erupted again in 1939, Stratton eagerly volunteered to return to active service. After persuading the War Office, he was given command of an Officer Cadet Training Unit. However, he was soon reassigned to the Royal Corps of Signals and given a special-duties role concerned with radio security. As a result, Stratton spent the war travelling extensively across the British Empire and also to the United States. Having exceeded the age limit for retirement, he relinquished his commission in the Territorial Army on 20 October 1945, retaining the rank of brevet lieutenant-colonel. [7]

After a few years as mathematical lecturer at Cambridge he became Assistant Director of the Solar Physics Observatory from 1913 to 1919, then Tutor at Caius College from 1919 to 1928 and finally Professor of Astrophysics and Director of the Solar Physics Observatory (Director of the Combined Observatories after the amalgamation in 1946 with the Cambridge Observatory) from 1928 to 1947. He also wrote the main historical account of the Cambridge Observatories. [8] He was president of the Royal Astronomical Society in 1933–35. In 1947 he was elected a Fellow of the Royal Society. [1] [9] In 1952 he was awarded the Prix Jules Janssen by the Société astronomique de France. [10]

Stratton held interest in parapsychology. He was the President of the Society for Psychical Research in 1953–1955. [11]

Sir Frank Watson Dyson, KBE, FRS, FRSE was an English astronomer and the ninth Astronomer Royal who is remembered today largely for introducing time signals ("pips") from Greenwich, England, and for the role he played in proving Einstein's theory of general relativity. 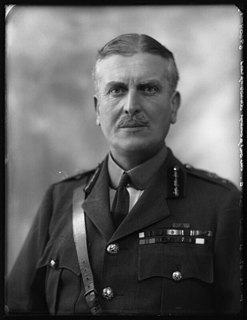 Field Marshal Sir Archibald Armar Montgomery-Massingberd,, known as Archibald Armar Montgomery until October 1926, was a senior British Army officer who served as Chief of the Imperial General Staff (CIGS) from 1933 to 1936. He served in the Second Boer War and in the First World War, and later was the driving force behind the formation of a permanent "Mobile Division", the fore-runner of the 1st Armoured Division.

Major-General Eric Grant Miles CB DSO MC was a senior British Army officer who saw active service during both World War I and World War II, where he commanded the 126th Infantry Brigade in the Battle of France and the 56th (London) Infantry Division in the final stages of the campaign in Tunisia. 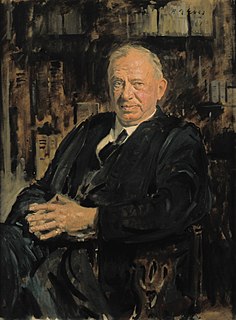 Prof Hector Munro Macdonald FRAS FRSE LLD was a Scottish mathematician, born in Edinburgh in 1865. He researched pure mathematics at Cambridge University after graduating from Aberdeen University with an honours degree.

Sir Charles Edward Inglis, was a British civil engineer. The son of a doctor, he was educated at Cheltenham College and won a scholarship to King's College, Cambridge, where he would later forge a career as an academic. Inglis spent a two-year period with the engineering firm run by John Wolfe-Barry before he returned to King's College as a lecturer. Working with Professors James Alfred Ewing and Bertram Hopkinson, he made several important studies into the effects of vibration on structures and defects on the strength of plate steel.

Major-General Eric Stuart Cole was a senior British Army officer and telecommunications expert. He saw active service in the Second World War, with his most important contribution being the planning of communications for the invasion of Normandy. He continued his army career after the war, ultimately holding the post of director of telecommunications at the War Office.

Vernon Alec Murray Robertson, CBE, MC and bar was a British civil engineer in the railway sector. During the First World War he served with the Royal Engineers with distinction, earning the Military Cross twice. Robertson later worked for a number of railway companies before becoming Chief Civil Engineer to the London Passenger Transport Board, Southern Railway and the Southern Region of British Railways. During and after the Second World War he returned to the army and served with, and commanded, the Engineer and Railway Staff Corps. Robertson served as president of the Institution of Civil Engineers for 1949–50.

The Senior Wrangler is the top mathematics undergraduate at the University of Cambridge in England, a position which has been described as "the greatest intellectual achievement attainable in Britain."

Sir David Randall Pye CB FRS was a British mechanical engineer and academic administrator. He served as Provost of University College London from 1942 to 1951. 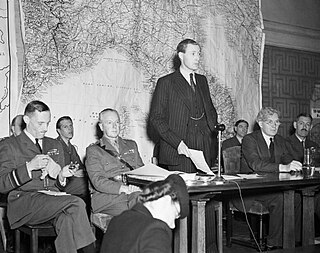 Air Vice-Marshal William Charles Coleman Gell, was an officer of the British Army and then of the Royal Air Force. He served as Air Officer Commanding-in-Chief at RAF Balloon Command from 1944 to 1945.

Hugh Frank Newall, FRS FRAS was a British astrophysicist. He was Professor of Astrophysics (1909) at Cambridge. He was the son of Robert Stirling Newall FRS and his wife Mary, daughter of Hugh Lee Pattinson, FRS.

John Forbes Cameron was a Scottish mathematician, academic and academic administrator. He was Master of Gonville and Caius College, Cambridge from 1928 to 1948 and was Vice-Chancellor of the University of Cambridge from 1933 to 1935.

Major-General Thomas Needham Furnival Wilson CB DSO MC was a British Army officer who saw service in both the First and the Second World Wars. 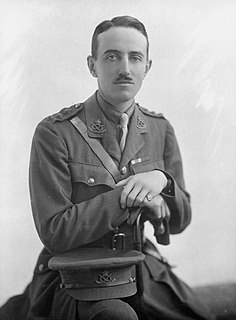