Frank William Taussig (1859–1940) was an American economist who is credited with creating the foundations of modern trade theory.

He was born on December 28, 1859, in St. Louis, Missouri, the son of William Taussig and Adele Wuerpel. His parents encouraged his literary and musical interests, and he played the violin at an early age. He was educated in the St. Louis public schools and at Smith Academy in that same city. He then went to Washington University there but, after a year transferred to Harvard from where he graduated in 1879. [4]

He traveled in Europe for a year, taking some time to study economics at the University of Berlin. He then did graduate work at Harvard in law and economics while he was secretary to President Charles W. Eliot for some years.

He got a law degree in 1886 and was appointed assistant professor at Harvard. [5] He became professor of economics in 1892, and he remained at Harvard for the balance of his professional career except for several years spent in federal service and some time spent traveling in Europe recovering from a nervous disorder. [4]

Taussig was an open advocate of forced sterilization of races and classes he considered inferior. In his 1911 textbook Principles of Economics, Taussing remarked:

Certain types of criminals and paupers breed only their kind, and society has a right and a duty to protect its members from the repeated burden of maintaining and guarding such parasites. ... The human race could be immensely improved in quality, and its capacity for happy living immensely increased, if those of poor physical and mental endowment were prevented from multiplying. [6]

Paul Douglas (a future president of the American Economic Association and three-term Senator from Illinois) was a graduate student under Taussig at Harvard in the Fall of 1915 and recalled the experience. Douglas had studied two years in graduate school at Columbia University with Edwin Seligman, who was an ideological enemy of Taussig. Given the opportunity to criticize the Columbia school of economic thought by confronting Douglas, Taussig attempted to humiliate him to the delight of the Harvard pupils who filled the lecture hall to witness the "slaughter". Eventually, Douglas turned the tables and trapped Taussig in a logical economic debate. Douglas recalled, "The following day, Taussig cordially shook hands with me at the end of the hour. ... We also became fast friends for the rest of his life. Trying as the experience was, it was the best thing to happen to me in my academic life. It forced me to master the reasoning of the great economic theorists and to stand my ground under verbal and logical bombardment." [7]

In a 1912 article in The Quarterly Journal of Economics , Taussig favored protecting the beet sugar industry with a tariff on sugar imports. A beet sugar industry gives intangible benefits by adding to the versatility and capabilities of American agriculture. Unskilled labor gains employment in the labor-intensive beet sugar sector of agriculture. Beet sugar grows best in cool climates of the irrigated regions of Colorado, Utah, Idaho, Montana, and California. [8]

In March 1919, he was called to Paris to advise in the adjustment of commercial treaties, and in November, on invitation of Woodrow Wilson, he attended the second industrial conference in Washington, DC, for promoting peace between capital and labour. He was a strong supporter of the League of Nations.

He died on November 11, 1940, aged 80, in Cambridge, Massachusetts. Taussig is buried in Mount Auburn Cemetery in Cambridge.

The successor to his chair at Harvard was Joseph Schumpeter. In 1888, he married Edith Thomas Guild. One of their four children was Helen B. Taussig (1898–1986), a noted pediatrician and cardiologist. F. W. Taussig's first wife died in 1910, and he married Laura Fisher. [4] [5]

Much of Taussigs work is available from Internet Archive:

The Tariff Act of 1930, commonly known as the Smoot–Hawley Tariff or Hawley–Smoot Tariff, was a law that implemented protectionist trade policies in the United States. Sponsored by Senator Reed Smoot and Representative Willis C. Hawley, it was signed by President Herbert Hoover on June 17, 1930. The act raised US tariffs on over 20,000 imported goods.

The Morrill Tariff was an increased import tariff in the United States that was adopted on March 2, 1861, during the administration of US President James Buchanan, a Democrat. It was the twelfth of the seventeen planks in the platform of the incoming Republican Party, which had not yet been inaugurated, and the tariff appealed to industrialists and factory workers as a way to foster rapid industrial growth.

The Tariff Act of 1890, commonly called the McKinley Tariff, was an act of the United States Congress, framed by then Representative William McKinley, that became law on October 1, 1890. The tariff raised the average duty on imports to almost fifty percent, an act designed to protect domestic industries from foreign competition; protectionism, a tactic supported by Republicans, was fiercely debated by politicians and condemned by Democrats.

The Revenue Act or Wilson-Gorman Tariff of 1894 slightly reduced the United States tariff rates from the numbers set in the 1890 McKinley tariff and imposed a 2% tax on income over $4,000. It is named for William L. Wilson, Representative from West Virginia, chair of the U.S. House Ways and Means Committee, and Senator Arthur P. Gorman of Maryland, both Democrats.

The Dingley Act of 1897, introduced by U.S. Representative Nelson Dingley Jr., of Maine, raised tariffs in United States to counteract the Wilson–Gorman Tariff Act of 1894, which had lowered rates. The bill came into effect under William McKinley the first year that he was in office. The McKinley administration wanted to bring back the protectionism slowly that was proposed by the Tariff of 1890.

Free trade is a trade policy that does not restrict imports or exports. It can also be understood as the free market idea applied to international trade. In government, free trade is predominantly advocated by political parties that hold economic liberal positions, while economic nationalist and left-wing political parties generally support protectionism, the opposite of free trade. 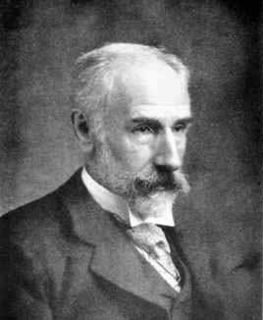 William Cunningham was a Scottish economic historian and Anglican priest. He was a proponent of the historical method in economics and an opponent of free trade.

Tariffs have historically served a key role in the trade policy of the United States. Their purpose was to generate revenue for the federal government and to allow for import substitution industrialization by acting as a protective barrier around infant industries. They also aimed to reduce the trade deficit and the pressure of foreign competition. Tariffs were one of the pillars of the American System that allowed the rapid development and industrialization of the United States. The United States pursued a protectionist policy from the beginning of the 19th century until the middle of the 20th century. Between 1861 and 1933, they had one of the highest average tariff rates on manufactured imports in the world. However American agricultural and industrial were cheaper than rival products and the tariff had an impact primarily on wool products. After 1942 the U.S. promoted worldwide free trade.

Frank Albert Fetter was an American economist of the Austrian School. Fetter's treatise, The Principles of Economics, contributed to an increased American interest in the Austrian School, including the theories of Eugen von Böhm-Bawerk, Friedrich von Wieser, Ludwig von Mises and Friedrich Hayek. 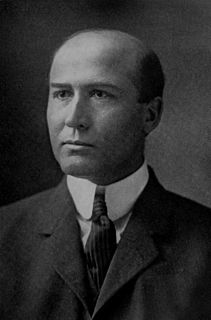 Chester Whitney Wright (1879–1966) was an American economic historian, and Professor at the University of Chicago, known for his works on the economic history of the United States. 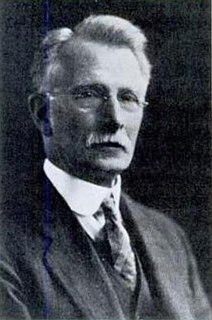 Philip Green Wright was an American economist who in 1928 first proposed the use of instrumental variables estimation as the earliest known solution to the identification problem in econometrics. In a book review published in 1915 he wrote one of the first explanations of the identification problem. His primary topic of applied research was tariff policy, and he wrote several books on the topic. He also wrote poetry, was a mentor to the poet and author Carl Sandburg, and published some of Sandburg's earliest works. Wright was the father of geneticist Sewall Wright.