The competition was originally known as the FAI Qualifying Cup before it was renamed the FAI Intermediate Cup at the start of the 1931–32 season. The cup's first winners were Drumcondra who beat Cobh Ramblers in the inaugural 1926–27 final. Drumcondra, who at the time were playing in the Leinster Senior League, subsequently went onto complete a cup double when they defeated Brideville 1–0 in the 1926–27 FAI Cup final. [3] [4] [5] The competition continues to act a qualifying competition for the FAI Cup with clubs who reach the Round of Sixteen being invited to compete in the senior cup. [2]

In addition to being the inaugural winners, Drumcondra were also the first of several future League of Ireland clubs to win the FAI Intermediate Cup. Cork Bohemians, Sligo Rovers, Longford Town, UCD, Cobh Ramblers, St Patricks Athletic, Albert Rovers, Bray Wanderers, Home Farm and Cork Hibernians, playing as AOH, all subsequently won the cup before joining the national league. Athlone Town were also finalists on one occasion. Jacobs, St. James's Gate and Transport all won the cup after leaving the League of Ireland. With five wins, Longford Town were the competitions most successful club until Bluebell United equalled their record in 1999–2000 and Avondale United surpassed it in 2013–14. The reserve teams of League of Ireland clubs have also won the cup on several occasions. These include Bohemians, Shelbourne, Drumcondra and St Patrick's Athletic. Limerick B and UCD Reserves were also runners up. [4] [5]

During the 2000s and 2010s Avondale United and Crumlin United have been the cup's most successful clubs. In 2013–14 Avondale United became only the second club after Distillery to win the cup four times in a row. [6] [7] In 2012 the FAI introduced a new cup, the Tom Hand Memorial Cup, which saw the winners of the FAI Intermediate Cup play off against the winners of the FAI Junior Cup. Avondale United won the inaugural match, defeating Sheriff Y.C. 2–1 at the AUL Complex. [8] [9] In 2014 it was announced that future finals would be hosted at the Aviva Stadium. [10] The 2014–15 and 2015–16 finals were both played as double headers along with the FAI Junior Cup finals. [11] [12]

Sporting Fingal Football Club was an Irish association football club based in Fingal. Between 2008 and 2010, the club played three seasons in the League of Ireland. During their first two seasons they played in the First Division before winning promotion to the Premier Division. During the 2009 and 2010 seasons, the club also entered a team in the A Championship. During their short stay in the League of Ireland, Sporting Fingal were relatively successful. As well as gaining promotion to the Premier Division, they also won both the 2009 FAI Cup and the 2010 A Championship Cup and qualified for the UEFA Europa League on two occasions. In addition to fielding teams in the League of Ireland, Sporting Fingal also organised Powerchair Football, Special Olympics football and futsal teams. Their futsal team won the 2010 FAI Futsal Cup and qualified for the 2010–11 UEFA Futsal Cup.

The FAI Youth Cup, also known as the FAI Umbro Youth Challenge Cup, is a cup competition organised by the FAI for youth association football clubs and teams in the Republic of Ireland. The inaugural winners were Greenmount Rangers. The competition's most successful club has been Home Farm who have won the cup eleven times. They have also been finalists on a further seven occasions. In 1964–65 a Home Farm A team, featuring Terry Conroy and Billy Newman, played a Home Farm B team in the final at Tolka Park. The cup is currently sponsored by Umbro.

The Football Association of Ireland Women's Cup is the senior cup competition for women's association football in the Republic of Ireland. It is commonly known as the Women's FAI Cup, the WFAI Cup, or prior to 2001, the Ladies FAI Cup or the LFAI Cup. Organised by the Women's Football Association of Ireland, like the Women's National League, the Cup is currently sponsored by Continental Tyres and is known as the Continental Tyres Women's Senior Cup. It has previously been sponsored by Umbro and Brother International.

Marie Claire Curtin is a former professional footballer who played for Republic of Ireland women's national football team. Curtin played for several clubs in the Women's National League, including Cork Women's F.C., Galway, Limerick and most recently Treaty United. She has also represented UCD in Europe. Curtin has also played at a semi-professional level for Long Island Fury in the Women's Premier Soccer League and for Fortuna Ålesund in the Norwegian First Division. Curtin has also played senior Ladies' Gaelic football for Limerick. In 2013 Curtin and her father, Sean, co-founded a dairy foods company, Temple Dairy Ltd. Curtin retired in January 2021.

The 2011–12 FAI Umbro Intermediate Cup was the 85th season of the tournament's existence. 94 clubs competed to win the title, and it was Avondale United who were the victors after they beat Cherry Orchard 2–1 for the second successive season in the final after extra time in Tallaght Stadium to gain their fifth Intermediate Cup title. The 16 teams that reached the fourth round qualified for the 2012 FAI Cup.

The 2012–13 Umbro FAI Intermediate Cup was the 86th season of the tournament's existence. 94 clubs competed to win the title. Avondale United are the defending champions after they beat Cherry Orchard 2-1 for the second successive season in the final after extra time in Tallaght Stadium to gain their fifth Intermediate Cup title. The 16 teams that reach the fourth round will qualify for the 2013 FAI Cup.

Ciara Grant is a Republic of Ireland women's international footballer who has played for Raheny United and UCD Waves. In 2010, she was a member of the Republic of Ireland U-17 squad that were runners-up in the 2010 UEFA Women's Under-17 Championship and quarter-finalists in the 2010 FIFA U-17 Women's World Cup. Grant has also played Gaelic football for the Donegal county team.

Fiona Hayes is a former Ireland women's rugby union international. She was a member of the Ireland teams that won the 2013 and 2015 Women's Six Nations Championships. She was also a member of the Ireland team that defeated New Zealand at the 2014 Women's Rugby World Cup. Hayes has also played association football at intervarsity and intermediate level.

UCD Women's Soccer Club is an Irish association football club based in Dún Laoghaire–Rathdown. It is the women's association football team of University College Dublin. Founded in 1966, UCD are one of the oldest women's football clubs in the Republic of Ireland. Like the UCD men's team, the women's football team has competed in national competitions, such as the FAI Women's Cup and the Women's National League, as well as intervarsity competitions. UCD has also represented the Republic of Ireland in the UEFA Women's Cup. Between 2014 and 2018, following a merger, with DLR Waves, the club played in the Women's National League and FAI Women's Cup as UCD Waves. However in 2018 UCD withdrew from the WNL. DLR Waves was subsequently revived as a separate club, taking UCD Waves' place in the WNL.

Distillery Football Club was an Irish association football club originally based on Distillery Road in Drumcondra, Dublin. The club was active during the 1930s and 1940s, fielding teams in both the Leinster Senior League and the Athletic Union League. They also competed in the FAI Cup, the FAI Intermediate Cup, the FAI Junior Cup and the Leinster Senior Cup, winning the three latter trophies. Despite their successes at intermediate and junior level, unlike their contemporaries Sligo Rovers and St Patrick's Athletic, Distillery never joined the League of Ireland.

The 2018 FAI Cup was the 98th edition of the Republic of Ireland's primary national cup competition. It began with the qualifying round on 21 April 2018, and concluded with the final on 4 November 2018. The winner qualified for the 2019–20 Europa League first qualifying round. 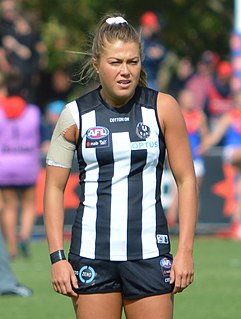 Sarah Rowe is a dual code sportswoman and a former Republic of Ireland women's association football international. In addition to association football, Rowe has also played two other football codes at a senior level. She has played ladies' Gaelic football for Mayo and women's Australian rules football for Collingwood in the AFLW. At club level, Rowe has played association football for Castlebar Celtic, Raheny United and Shelbourne Ladies in the Women's National League. Rowe was a member of the Republic of Ireland U19 team that won their group at the 2014 UEFA Women's Under-19 Championship and qualified for the semi-finals. In 2016 she was also a member of the Shelbourne Ladies team that won a Women's National League/FAI Women's Cup double.