The football club was formed in 2006 and entered the Ukrainian Second League in 2007. The football club is part of a bigger sports club "ArsenalBC" based in Bila Tserkva and which specialized in triathlon events and well as cross country running and bicycle racing.

In 2009 FC Arsenal was promoted to the Ukrainian First League via a playoff game. [2] While based in Bila Tserkva, FC Arsenal also plays its games in Obukhiv which is located closer to Kyiv.

The club was relegated to the Ukrainian Second League after the 2012–13 season. [3]

The club's training grounds are located in the village of Shkarivka, Kyiv Oblast around six miles (10 km) away from Bila Tserkva. Its main sponsor is one of the biggest furniture companies in Ukraine, the owner of which is the president of the club, Yuriy Horobets. Until the 2009–2010 season its home games the club were played in the neighboring city of Obukhiv, Kyiv Oblast. Finally the administration of the club managed to lease the locally available municipal stadium, Trudovi Reservy (the Central Children-Youth Sport Arena "Trudovi Reservy"), in Bila Tserkva for the 2009–2010 season. After the club's promotion to the First League, the club was allowed also to use the stadium for some training, although for a limited time.

Trudovi Reservy has an electronic display and some stadium roofing. The stadium is the property of the city and is co-sponsored by the regional football federation, Kyiv Oblast Football Federation along with the city administration. The stadium is primarily designated for the development of the amateur football, in particular the youth teams.

Football Club Arsenal Kyiv is a Ukrainian football club based in Kyiv. In 2019 the club's professional team was dissolved, but its junior teams continue to compete in city competitions. The club claims to be a successor of Kyiv Arsenal factory team which traces its history back to 1925. The original factory team used to compete in the Soviet Class B, but was relegated in 1964 and its teams of masters was officially dissolved.

The 2008–09 Ukrainian Second League was the 18th season of 3rd level professional football in Ukraine. The competitions are divided into two groups – A and B.

The 2009–10 Ukrainian First League was the nineteenth since its establishment. There were 18 teams competing. Two teams were relegated from the 2008–09 Ukrainian Premier League. Three teams were promoted from the 2008–09 Ukrainian Second League. Due to the 2009 flu pandemic which affected Ukraine in late October the PFL decide to break for winter earlier than they originally scheduled. The second half of the season began March 11, 2010. 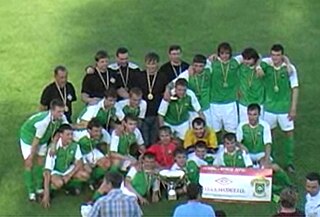 The 2010–11 Ukrainian First League was the 20th since its establishment. Eighteen teams competed in the competition. Two teams were promoted from the 2009–10 Ukrainian Second League and a third team replaced a team that withdrew from the competition.

The 2012–13 Ukrainian First League will be the 22nd since its establishment. The competition commenced on 13 July 2012 when Obolon Kyiv visited Sumy and played a goalless draw against FC Sumy. The competition had a winter break that started 25 November 2012 and resumed on 23 March 2013.

The 2015–16 Ukrainian First League was the 25th since its establishment. The competition commenced on 26 July 2015 with eight matches. The competition had a winter break which began after Round 18 on November 22. The competition resumed on 26 March 2016 and completed on 1 June 2016.

The 2016–17 Ukrainian Cup is the 26th annual season of Ukraine's football knockout competition. The decision on a schedule of competitions for clubs from the First and Second League in the composition will be confirmed by Central Council of the Professional Football League of Ukraine and the competition will start on 20 July 2016. 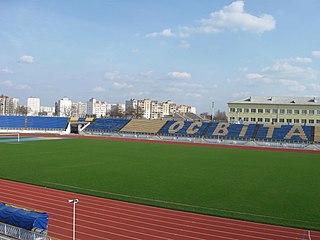 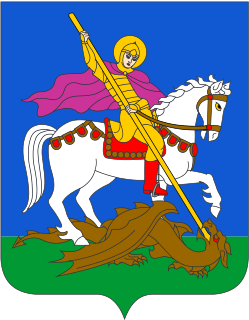 Kyiv Oblast Football Federation (KOFF) is a football governing body in the region of Kyiv Oblast, Ukraine. The federation is a collective member of the Ukrainian Association of Football.

The 2017–18 Ukrainian Second League was the 27th season since its establishment. The competition commenced on 14 July 2017. The league returned to the multiple group competition format after it was abandoned in 2013. Final composition of the league was approved at the PFL Conference on 21 June 2017.

Vadym Hetman is a Ukrainian footballer who played as a defender.

The 2018–19 season was the 28th season of competitive association football in Ukraine since dissolution of the Soviet Union.

The 2017–18 season was the 27th season of competitive association football in Ukraine since dissolution of the Soviet Union.

The 2016–17 season was the 26th season of competitive association football in Ukraine since dissolution of the Soviet Union.

Artem Vasilevich Padun is a Ukrainian professional footballer who plays as a goalkeeper for Chernihiv.