FC Midtjylland (Danish:  [ˈmitjyˌlænˀ] , "Central Jutland") is a Danish professional football club based in Herning and Ikast in the midwestern part of Jutland. The club is the result of a merger between Ikast FS and Herning Fremad. Midtjylland competes in the Danish Superliga, which they have won three times, most recently in 2020.

FC Midtjylland was founded by Johnny Rune, a carpenter and owner of a private business in the wood-supply industry, and Steen Hessel, an authorized Mercedes-Benz dealer. [1]

The two men wanted to unite the football clubs Ikast FS (founded 1935) and Herning Fremad (founded 1918) – clubs that for decades had been strong rivals, but had never played any significant role in Danish football. Ikast FS had some success in the late 1970s and '80s and made three Danish Cup final appearances, but had never been a top team in the Danish league. At least ten years had passed with the two clubs being unable to agree on a merger, but on 6 April 1999, a deal was finalised and announced at a press conference the next day. [2] [3]

In 2000, Midtjylland were promoted to the top-flight Danish Superliga after a season in which the team had gathered more points than any other team in the history of the first division.

In July 2014, Matthew Benham (owner of English club Brentford) became the majority shareholder of Midtjylland's parent company FCM Holding. [4] In the 2014–15 season, they won the Danish football championship for the first time. Later on, they won two league titles in 2017–18 and 2019–20, then qualified to the 2020–21 UEFA Champions League group stage for the first time in their history. [5]

Midtjylland have built a reputation of finding and developing promising talents, and have a highly regarded youth academy. [6]

In July 2004, Midtjylland was the first Danish club to establish their own football academy, similar to that of French side Nantes. [7] The academy attracts players from throughout Denmark, as well as players from FC Ebedei, a partnering club in Nigeria. The club has developed a network of over 100 clubs located in the western part of Jutland. [8]

In 2004, the team moved to a new stadium in Herning with a capacity of approximately 12,000 spectators. Midtjylland was the first Danish club to sell the stadium naming rights to a sponsor, resulting in the name "SAS Arena" which has since been changed to MCH Arena. The stadium's opening match was on 27 March; it proved to be a success, with Midtjylland beating AB 6–0. Five of the goals were scored by Egyptian striker Mohamed Zidan.

The club's main rival is Viborg FF, the derby is claimed to be the second biggest in Denmark after FC København and Brøndby IF.

FC Midtjylland's first competitive European match was on 9 August 2001 in the 2001–02 UEFA Cup, playing Northern Ireland's Glentoran to a 1–1 draw in the first leg of the Qualifying Round before ultimately advancing to the First Round where they were eliminated by Sporting CP. In 2016 Midtjylland reached the Round of 32 of the 2015–16 UEFA Europa League, where they achieved a 2–1 home victory over Manchester United but would end up losing 6–3 on aggregate following the second leg.

Peter Skov-Jensen is a Danish former professional football player who was a goalkeeper. He among others played for the German club VfL Bochum in the Bundesliga championship. He works a goalkeeper coach at BK Avarta. Skov-Jensen played four games for the Denmark national team, and was part of the Danish squad at the 2004 European Championship.

The MCH Arena is an association football stadium situated in the south of Herning, Denmark, that is part of MCH Messecenter Herning complex and owned by MCH Group A/S. It has been the home ground of FC Midtjylland since March 2004. An integrated part of the arena is a main building housing the club's administration and offices for the official fan club, and includes player and referee facilities, a restaurant, a VIP lounge, press and sky boxes, and a club shop. The total capacity during domestic matches is 11,432 spectators with 7,070 seatings making it the 9th largest football stadium in Denmark. At international FIFA and UEFA matches, the capacity of the four covered single-tiered stands is reduced to 9,430, when the terraces at the north and south stands are converted to an all-seater mode. The stadium's current attendance record of 11,763 spectators dates back to a 2007–08 Danish Superliga match on 11 November 2007, when FC Midtjylland drew 2–2 against FC Copenhagen.

Ikast FC is an association football club based in the town of Ikast, Denmark, that competes in the Series 1, the sixth tier of the Danish football league system and the second tier of the regional DBU Jutland. Founded in 2018 as a superstructure of between the amateur departments of Ikast FS and Ikast KFUM, it is affiliated to FC Midtjylland, which is itself a superstructure established in 1999 between the professional departments of Ikast FS and Herning Fremad. The team plays its home matches at Wunderelf Arena where it has been based since its foundation.

Troels Bech is a Danish professional football manager and former player, who managed Odense Boldklub (OB) to the 2002 Danish Cup trophy. He was the manager of Danish club Esbjerg fB until November 2008 and took over Danish club Silkeborg IF in January 2009. During his active career, he most prominently won the 1994 Danish Superliga championship with Silkeborg IF.

Herning-Ikast Håndbold is a Danish women's handball club based in Ikast. They have competed in Damehåndboldligaen, Denmark's primary handball league, since 1991. 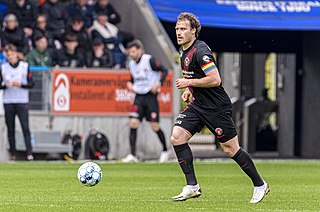 Erik Sergiyovych Sviatchenko is a Danish footballer who plays as a defender and captain of FC Midtjylland.

Jesper Bøge Pedersen is a Danish footballer who plays as a defender for Hobro IK.

Glen Riddersholm is a Danish football manager. He is the manager of Danish Superliga club SønderjyskE.

Patrick Banggaard Jensen is a Danish professional footballer who plays as a defender for SønderjyskE.

Frederik Møller is a Danish footballer who plays as a left back.

André Ibsen Rømer is a Danish professional footballer who plays as a defensive midfielder for Allsvenskan club IF Elfsborg. 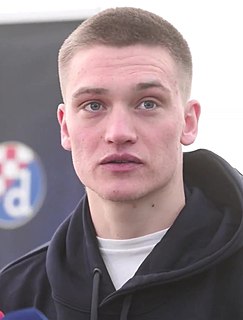 Rasmus Steensbæk Lauritsen is a Danish footballer who plays as a centre back for Prva HNL side Dinamo Zagreb.

Rasmus Nissen Kristensen, also referred to informally as NK or Nissen, is a Danish professional footballer who plays as a right-back for Austrian Bundesliga club Red Bull Salzburg.

Mikael Neville Anderson is an Icelandic footballer who plays as a winger for Danish Superliga club AGF.

Andreas Poulsen is a Danish professional footballer who plays as a left-back for 2. Bundesliga club FC Ingolstadt, on loan from Borussia Mönchengladbach.

Ogochukwu Frank Onyeka is a Nigerian professional footballer who plays as a midfielder for Premier League club Brentford and the Nigeria national team.

Nikolaj Hammelsvang Kirk is a Danish professional footballer who plays for Aarhus Fremad as a central midfielder or full back. He is a product of the FC Midtjylland academy and represented Denmark at youth level.