FC Minyor (Bulgarian : ФК Миньор) is a football club in Pernik, Bulgaria, that competes in the Second League, the second tier of Bulgarian football. Founded in 1919 as SC Krakra, the club's home ground since 1954 has been Stadion Minyor. The club's name comes from the fact that the area around the city of Pernik has had long traditions with mining and the mining industry.

The club's highest league finish in the top division is fourth, which was achieved in the 1955 and 1960–61 seasons. Minyor played in the Bulgarian Cup Final in 1958, finishing runners-up to Spartak Plovdiv.

The origins of the club date back to 1919. Minyor came into existence with the merger of several football clubs from Pernik. In 1944, SC Krakra (founded in 1919), SC Svetkavitsa (founded in 1932), SC Benkovski (founded in 1936), and ZHSK (founded in 1941) merged to form SC Rudnichar. After World War II, as Bulgaria became a People's Republic, the club was renamed to Republikanets '46. The club finally came to be known as Minyor in 1952.

The club joined the Bulgarian top division in 1951. That same year, they laid the foundations of a strong team, which, until the 1961–62 season, was among the top teams in Bulgaria. The first match in the division was on March 2, 1951 against Cherveno Zname Sofia. Minyor's best seasons in the top division were in 1955 and 1961, finishing both times at fourth place.

In 1956, Minyor's forward and captain Pavel Vladimirov became the top scorer of the division with 16 goals. Vladimirov holds Minyor's overall appearance record - 305 matches. The former forward is also the all-time leading scorer for the club with 98 goals.

In 1958, the club qualified for the final of the Bulgarian Cup, where the team lost to Spartak Plovdiv. In 1962, Minyor was relegated to the second division. Between 1962 and 2008, the club participated in the top and second divisions, regularly being promoted and relegated. Until the 2008–09 season, Minyor has played a total of 32 seasons in the first division. Minyor's biggest victory in A PFG to date is the 6-0 win against Torpedo Pleven in 1951. Minyor's largest defeat, 0–8, was against Beroe Stara Zagora in 1973.

Minyor Pernik's latest spell in the top flight began in 2008. They managed to return to the elite rank by winning the 2007-08 promotion play-off, beating Kaliakra Kavarna after a penalty shootout. Their first season since returning to the elite was quite successful as they finished 11th, with 35 points, including an away draw to Levski Sofia. The next season, 2009-10, was better for the hammers, as they managed to finish in eight place, under the management of Anton Velkov. Minyor collected 45 points, and managed to beat CSKA Sofia 0-3 in Sofia, which was the latter's only defeat at home for the season. For the 2010-11 season, Minyor hired Stoycho Stoev, who replaced Anton Velkov due to poor results in the beginning of the season. Minyor eventually finished the season in 9th place, with 36 points. Minyor decided to extend Stoev's contract for the 2011-12 season. They had another relatively successful season, finishing in 9th place again, with 36 points. Highlights from the season included a home 2-0 win over CSKA Sofia and an away win against Levski Sofia, the two most decorated Bulgarian teams. Minyor also reached the quarterfinals of the Bulgarian cup for the 2011-12 season. They were, however, eliminated by Litex Lovech by a score of 2-0. Stoycho Stoev left the club at the end of the season and was replaced by Nikolay Todorov. However, Minyor dropped their form and eventually finished 14th, meaning they were relegated after a 5 year stay in the top level.

The team was supposed to play in the 2013-14 B PFG, however due to very big financial problems, the owners of the club decided to abolish the current club and establish a new one, starting from V AFG. The new team, carrying the identity and traditions of the old one, started playing in the third tier from the 2013-14 season. Pernik played there in the following six seasons.

Minyor finished first in the Southwest third league for the 2019-20 season and promoted to the Second League for the first time in seven years.

Minyor's fans are known as the hammers or the yellow-blacks. They are famous for their passion and for the violence they cause before, during and after the matches. They have a legendary hatred for Levski Sofia and the fans of both teams have had some big fights over the years, some of which have even involved rifles. Minyor's fans are also infamous for their general hatred for Sofia. Their only friends are considered to be Botev Plovdiv, also yellow-black. The Minyor's rivals call them "orcs" due to the mining heritage of the town.

PFC Spartak Plovdiv is a Bulgarian football club based in Plovdiv, which currently plays in the third tier of Bulgarian football, the Third League. The club was established in 1947 and folded its senior team in 2016, before being 'refounded' in 2017. Spartak currently plays its home matches at the 3,000-seat Todor Diev Stadium in the Kichuk Parizh district of Plovdiv. The stadium is named after the club's all-time greatest player Todor Diev.

Velbazhd Kyustendil is a Bulgarian association football club based in Kyustendil. The club currently competes in the Third League, the third tier of Bulgarian football.

The 2006–07 A Group was the 59th season of the Bulgarian A Football Group since its establishment in 1948 and the 83rd of a Bulgarian national top football division.

The 2000–01 A Group was the 53rd season of the A Football Group, the top Bulgarian professional league for association football clubs, since its establishment in 1948.

The 2009–10 A Group was the 86th season of the Bulgarian national top football division, and the 62nd of A Group as the top tier football league in the country. It began on 7 August 2009 with the game between Beroe and Lokomotiv Sofia. The last round took place on 16 May 2010. Levski Sofia were the defending champions, but they were unable to defend it and Litex Lovech won the title, which was their third overall.

The 2009–10 Bulgarian Cup was the 28th official season of the Bulgarian annual football knockout tournament. The competition began on September 16, 2009 with the matches of the Preliminary Round and ended with the final on May 5, 2010. Litex Lovech are the defending champions. 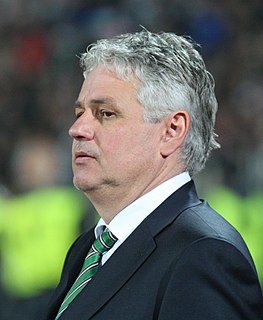 Stoycho Zahariev Stoev is a Bulgarian former footballer and manager.

Anton Karachanakov is a Bulgarian second professional football league who plays as a winger for Pirin Blagoevgrad.

The 2011–12 Bulgarian Cup was the 30th official season of the Bulgarian annual football knockout tournament. The competition began in September 2011 with the matches of the Preliminary Round and ended with the final in May 2012. CSKA Sofia were the defending champions, but lost to Septemvri Simitli in the quarterfinals. Ludogorets Razgrad won the title, after defeating Lokomotiv Plovdiv in the final.

The 1987–88 season is FC Lokomotiv Gorna Oryahovitsa's 2nd season in A PFG.

The 1988–89 season was FC Lokomotiv Gorna Oryahovitsa's third season in A PFG.

The 2012–13 season is Levski Sofia's 91st season in the First League. This article shows player statistics and all matches that the club has played during the 2012–13 season.

This page covers all relevant details regarding PFC Cherno More Varna for all official competitions inside the 2000–01 season. These are A Group and Bulgarian Cup.