Fotbal Club Unirea Urziceni, commonly known as Unirea Urziceni (Romanian pronunciation:  [uˈnire̯a urziˈt͡ʃenʲ] ), was a Romanian professional football club based in Urziceni, Ialomița County. Unirea became national champions in 2009, at the end of their third season in the top-flight.

The club was founded in 1954, and spent the majority of its history in the lower tiers of the Romanian league system. In 2006 they reached Liga I for the first time, and received national praise for their results at this level. At the end of their second season in the top division they earned qualification to Europe, and one year later they claimed the domestic title. In 2010, the team's owner withdrew financial support and Urziceni was forced to sell most of its players to pay debts, leading to relegation at the end of the 2010–11 season.

In the summer of 2011, owner Dumitru Bucşaru did not file for a licence for the club to play in the Liga I and decided not to enroll the team in any championship. Unirea Urziceni was subsequently dissolved. [1]

In the summer 2015 Unirea Urziceni was refounded by a Bucharest man and the team plays in Liga V. In 2016, another team was founded in Urziceni, named FC Urziceni. They also play in Liga V.

The first sporting club in Urziceni was a basketball club called "Ialomiţa". On an improvised pitch at Obor, the football team "Ialomiţa" played against teams from Ploieşti, Buzău, and Slobozia. They also played many games against Germans settled around the local lake, from which they took the name "La Nemţi" ("At the Germans'").

In 1976 a new stadium, Tineretului, was inaugurated.

In 1988 the club reached the round-of-sixteen phase of the Romanian Cup, but lost 3–1 to Corvinul Hunedoara.

Prior to their promotion to Divizia B at the end of the 2002–03 season, the club had spent its entire history playing in the lower leagues of the Romanian football league system, mostly in Divizia C and Divizia D.

In 2003 the club was taken over by a new sponsor, Valahorum. At the end of the 2005–06 season the club finished second in the Seria 2 of the Divizia B. Following the play-offs, played against Forex Braşov and Bihor Oradea, at Stadionul Naţional, the club was promoted to the Liga I for the very first time in its history.

The club finished 10th in its first season in the top division. In the Liga I 2007–08, they finished seventh and reached the cup final. Manager and former Chelsea player Dan Petrescu nicknamed the team Chelsea of Ialomiţa. The following season the club won the league for the first time, after they beat Timişoara 2–1, [2] and qualified for the Champions League.

The club finished 3rd in the 2009–10 UEFA Champions League Group stage, obtaining 8 points. They beat Rangers 4–1 in Glasgow and Sevilla in Bucharest 1–0 and drew 1–1, with VfB Stuttgart and Rangers at Bucharest. In the 2009–10 UEFA Europa League Knockout stage, Urziceni were drawn against English giants Liverpool. In the first round, at Anfield, Liverpool won 1–0, and at Bucharest, Unirea lost again, 1–3.

Unirea finished second in the 2009–10 Liga I season, again qualifying for the UEFA Champions League. In the third qualifying round, Unirea finished 0–0 against Zenit St. Petersburg at Bucharest. In Russia, they lost 1–0, with Danny scoring the winner. In the Europa League Play-off round Unirea played against Hajduk Split. They lost in the first game played in Poljud 4–1, and drew 1–1 in Bucharest.

In 2010, Unirea Urziceni started to decline. Dumitru Bucşaru sold almost the entire team during the first half of the championship, on account of a debt owed to Steaua owner Gigi Becali. In the second half of the season, Unirea took players on loan from Steaua II București and Dinamo II București, but only finished the season in 17th place. Although Unirea had avoided relegation, it didn't renew its license and was dissolved in 2011.

In 2015 it was refounded, but was dissolved again after only two years.

Both of the club's nicknames originated during Dan Petrescu's period with the club.

Urziceni have been associated with Chelsea by the Romanian media after they quickly evolved from a newly promoted team to a title contender under the management of former Chelsea defender Dan Petrescu. His role was seen similar to that of Roman Abramovich, who started to invest massively in Chelsea in 2003, turning them in one of the best teams in Europe.

Dan Petrescu is also responsible for coining the Wolves of Bărăgan nickname. During training sessions and official fixtures, he would call his players "wolves" in order to increase their ferocity. Bărăgan refers to the plain in which the town of Urziceni is located.

Both of these nicknames were rarely used by the Romanian media, which usually referred to the team as Ialomiţenii, after the Ialomiţa County from where the club was based.

Unirea Urziceni colors are blue and white. However, football equipment worn by "ialomițeni" had over time other than the traditional colors such as orange, green, black or blue. Unirea Urziceni provider of equipment was the Spanish company Joma. [3]

The club crest contained a lion's head, a symbol of power. After the arrival of coach Dan Petrescu, a former player and admirer of Chelsea, the logo has undergone significant changes. Valahorum SA sponsor's name was removed from the emblem, being replaced by the number 1954 which is the year of foundation of the club. Logo design has also been modified so that it resemble as much English team emblem . Hence the nickname Team : Chelsea of Ialomița or Chelsea of Urziceni .

Daniel Vasile Petrescu is a Romanian football manager and former footballer who played as a full back or a winger. He most recently managed Liga I club CFR Cluj, with which he won three successive league titles.

Steaua Stadium, informally also known as Ghencea, was a football stadium in Bucharest, Romania, which served as the home of Steaua București. It was inaugurated on 9 April 1974 when Steaua played a friendly game against OFK Belgrade, 2–2. Gheorghe Tătaru was the first player to score in the stadium. 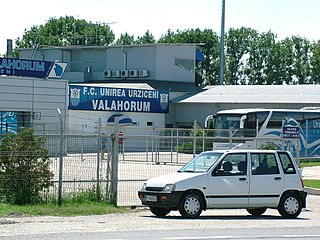 Tineretului Stadium is a multi-purpose stadium in Urziceni, Romania. It is currently used mostly for football matches and is the home ground of FC Urziceni.

Asociația Club Sportiv Dacia Unirea Brăila, commonly known as Dacia Unirea Brăila, is a Romanian professional football club from Brăila, founded in 1919. The club currently plays in the Liga III. Their home is the 18,256-seat Stadionul Municipal stadium, where they have played since 1974.

Sorin Cătălin Frunză is a Romanian professional footballer who plays as a left midfielder for Liga IV side Avântul Valea Mărului.

Pablo Daniel Brandán is an Argentine footballer and manager.

Raul Andrei Rusescu is a Romanian professional footballer who most recently played as an attacking midfielder or a forward for Romanian club Academica Clinceni. 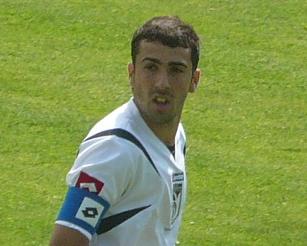 Dacian Şerban Varga is a Romanian footballer who plays mainly as a midfielder. He is the son of Ioan Varga, a former player of Dinamo Bucharest.

The 2005–06 Divizia B was the 66th season of the second tier of the Romanian football league system.

Fotbal Club Rapid 1923 II, commonly known as Rapid II București, or simply as Rapid II, is the reserve squad of Romanian second league side, FC Rapid București. Rapid II is based, as the first squad, in Bucharest and is currently playing in the Liga III.

The 2009 Supercupa României was the 11th edition of Romania's season opener cup competition. The match was played in Bucharest at Stadionul Giuleşti-Valentin Stănescu on 26 July 2009, and was contested between Liga I title holders, FC Unirea Urziceni and Cupa României champions, CFR Cluj. The winner, after penalties, was CFR Cluj. CFR was the first club not from Bucharest to claim the trophy since its establishment in 1994. The trophy was handed to the winners by Romania national football team coach, Răzvan Lucescu.

Laurențiu Nicolae Marinescu is a Romanian footballer who plays as a midfielder for CS Mioveni. In August 2010 he signed a contract with Steaua Bucureşti alongside teammates from Unirea Urziceni: Galamaz, Vilana, Apostol, Bilaşco, Onofraş and Brandán.

The 2009–10 season of Unirea Urziceni began on 25 July with the first training session, led by the team's head coach Dan Petrescu. After several friendlies the first competitive game was the Romanian Supercup against CFR Cluj on 26 July 2009. The match ended 1–1 in regular time, but CFR Cluj managed to win the cup after the penalty shootout, in which Răzvan Pădureţu, Raul Rusescu and Sorin Frunză missed.

The 2010–11 season in Romanian football was held between the summer of 2010 and the summer of 2011. The first division consisted of 18 teams, with CFR Cluj as the defending champions. The men's national team started the UEFA Euro 2012 qualifying campaign in Group D, along with France, Belarus, Bosnia and Herzegovina, Albania and Luxembourg.

During the 2009–10 German football season, VfB Stuttgart competed in the Bundesliga.