FC Viikingit is a Finnish football club based in Vuosaari, East Helsinki, and currently playing in the Kakkonen , the third tier of Finnish football. They play their home matches at Vuosaaren urheilukenttä, also called Heteniitty. The club's name and crest refer to Vikings, and they are known for their red colour.

FC Viikingit played the 2007 season in the Finnish premier division (Veikkausliiga), but were relegated to the Ykkönen and competed there until 2014, when they were relegated to Kakkonen. The club's reserve team, FC Viikkarit, were promoted to the Kakkonen for the 2014 season but they had to give it up, because they were not able to play on the same division as the main team.

The club was first founded as Vuosaaren Viikingit ('Vuosaari Vikings') in 1965. The new club started at the very bottom of the Finnish football pyramid, spending their first years in the fifth and sixth divisions. For the 1973 season, they were promoted to the IV division and played there for the next ten seasons. In 1983, the team were promoted to the III division, but this visit was cut short, as they were relegated again the following season. They were promoted again for the 1993 season, and this time managed to stay up. They even made a year-long visit to the Kakkonen in 1996, but were relegated after finishing last in their group. In 1997, the footballing section of the club was split into its own organisation with the name FC Viikingit. [1]

With the new organisation in place, the football club started to enjoy some success in the third division, and were promoted back to the Kakkonen for the 2001 season. The newly promoted team did well in the second division, finishing at first place in their group and winning direct promotion to the Ykkönen for the 2002 season. In their first season in the first division, FC Viikingit finished second to last and had to compete in a play-off against WJK from Varkaus. The Reds won the play-off and remained in the first division. For the 2003 season, Markku Kanerva was appointed the club's manager. He led the club to a successful season, finishing third in a 14-team league, only one point from a promotion play-off spot. In 2004, the club were managed by Steven Polack and finished fourth. [1]

Jari Europaeus was appointed manager of the Reds in 2005. In the following season, he led the club to first place in the Ykkönen, winning promotion to the Veikkausliiga , the highest level of Finnish football. In the first ever premier division match played at Heteniitty, Viikingit beat FC Honka with a 3–2 scoreline and an attendance of over 3,000. The aim for the 2007 Veikkausliiga season was to stay up in the top flight, and with the performances the team gave in the first half of the season, this looked likely. The attendance record, which is still in force, was created in the local derby against HJK Helsinki, which drew 4,255 viewers to Vuosaaren urheilukenttä. In the second half of the season, the team's performances began to drop. However, they managed to finish 13th and avoid direct relegation, but still had to compete in a relegation play-off against RoPS. The first leg in Rovaniemi finished 1–0 in favour of the home side, and therefore the Reds needed a win in the second leg, which was played at Töölön pallokenttä due to heavy snowfall at Heteniitty. However, the match finished 1–1, and Viikingit were relegated to the first division. [1]

After relegation from the top flight in the 2007 season, Viikingit have often reached the top three in the Ykkönen, but have fallen short of promotion every time. In 2008, the new manager Toni Korkeakunnas led the team to second place, but KuPS took the promotion play-off with an aggregate scoreline of 2–1. History repeated itself in 2010, when the Reds played JJK Jyväskylä in the play-off, but the Jyväskylä side were marginally better (3–2 on aggregate). From the 2011 season, Viikingit have been managed by long-time Reds player Ilkka Jäntti, finishing fifth and third respectively in the 2011 and 2012 seasons. [1] The club's attendance record in the Ykkönen, 1,670 viewers, was created on 21 July 2011 against local rivals HIFK. [2]

In 2013, the club were in danger of relegation to the Kakkonen, but played well in the closing stage of the season, finishing seventh in the end. [3] This was the club's worst finish since 2002. The season's bright spot was the fact that the reserve team, FC Viikkarit, won their group in the Kolmonen and were promoted to the second division for the 2014 season. [4]

FC Viikingit play their home matches at Vuosaaren urheilukenttä, often called Heteniitty or Hettari. The ground is located in Central Vuosaari in a former gravel pit, and for this reason is sometimes also called Monttu ('the Pit'). The ground currently has a capacity of 1,500, but has opportunities for expansion. For the 2007 Veikkausliiga season, the ground was expanded to 3,500 seats, but these expansions were removed after the club were relegated.

The reserve side FC Viikkarit play their home matches at Kartanon kenttä in Nordsjön kartano. This is likely to change for the 2014 season, however, as the ground currently does not fulfil the stadium requirements for the Kakkonen. The women's first team, as well as youth teams, also play at Kartanon kenttä.

Organisation and other teams

The football club split into two separate organisations in the end of the 2008 season. The first team now operates under its own registered association, FC Viikingit edustus ry, while all other teams continue under FC Viikingit ry.

The reserve side FC Viikingit/2 was founded in 2007 and played its first seasons in the Kolmonen. In the 2013 season, the team won its group and achieved promotion to the Kakkonen. [4] Upon reaching promotion, the team was renamed FC Viikkarit. The reserve team manager in the 2014 season is Alexei Zhukov. [6]

In addition, the club runs two amateur teams in lower leagues, FC Viikingit 05 and FC Viikingit/KoMa. As of 2014 [update] , both of these teams play in the Kutonen. 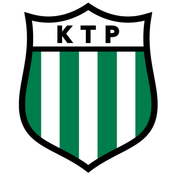 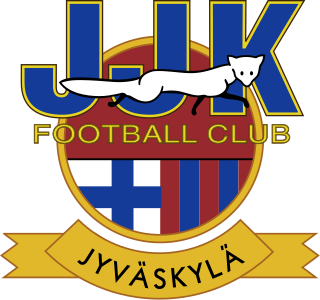 Kemi City Football Club, formerly known as Palloseura Kemi Kings, is a Finnish football team based in the town of Kemi, who are currently playing in the Kakkonen. They finished the 2019 season as champions of the Kolmonen.

FC Kontu is a football club from Helsinki, Finland. It serves Kontula in East Helsinki and the immediately surrounding area. The club was formed in 1967 under the name Kontulan Urheilijat, the name being changed in 1994. The men's football first team currently plays in the Kolmonen and their home ground is at the Kontulan liikuntapuisto. The club also run a Ladies team that play at the same level in Women's Football.

FC Viikkarit are a Finnish association football team based in Vuosaari, East Helsinki. They play in the Kakkonen, the third tier of football in Finland, and are the reserve team of second-tier club FC Viikingit. The reserve team was established in 2007 and won promotion to the Kakkonen after the 2013 season. The team is managed by Alexei Zhukov, who had a long career as a player for the first team of the East Helsinki club. 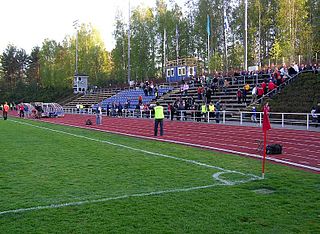 Vuosaari sports ground is a football and athletics ground in Vuosaari, Helsinki. It is the home ground of the East Helsinki football club FC Viikingit, who play in the Finnish first division (Ykkönen). The ground currently has a capacity of approximately 1,500 spectators, but it was expanded to 3,500 seats in the 2007 season, when Viikingit played in the Finnish premier division.

Jani Honkavaara is a Finnish football manager and retired football player, who currently is the manager of SJK.

The 2015 Ykkönen started on 2 May 2015 and ended on 17 October 2015. The winning team qualified directly for promotion to the 2016 Veikkausliiga 2016, the second has to play a play-off against the eleventh team from Veikkausliiga to decide who will play in that division. The bottom 2 teams will qualify directly for relegation to Kakkonen.

The 2019 Ykkönen was the 48th season of Ykkönen, the second highest football league in Finland. The season started on 27 April 2019. The winning team will qualify directly for promotion to the 2020 Veikkausliiga, the second has to play a play-off against the eleventh team from Veikkausliiga to decide who will play in that division. The bottom 2 teams will qualify directly for relegation to Kakkonen.