FIDE titles are awarded by the international chess governing body FIDE (Fédération Internationale des Échecs) for outstanding performance. The highest such title is Grandmaster (GM). Titles generally require a combination of Elo rating and norms (performance benchmarks in competitions including other titled players). Once awarded, titles are held for life except in cases of fraud or cheating. Open titles may be earned by all players, while women's titles are restricted to female players. Many strong female players hold both open and women's titles. FIDE also awards titles for arbiters, organizers and trainers. Titles for correspondence chess, chess problem composition and chess problem solving are no longer administered by FIDE.

A chess title, usually in an abbreviated form, may be used as an honorific. For example, Magnus Carlsen may be styled as "GM Magnus Carlsen".

The term "master" for a strong chess player was initially used informally. From the late 19th century various national chess federations began to draw up formal requirements for the use of such a title. The term "Grandmaster", in the form of the German loan word Großmeister, was a formal title in the Soviet Union, and had also been in informal use for the world's elite players for several decades before its institution by FIDE in 1950. [1] FIDE's first titles were awarded in 1950 and consisted of 27 Grandmasters (GMs), 94 International Masters (IMs), and 17 Woman International Masters (WIMs)[ citation needed ].

Initially the titles were awarded by a vote of the FIDE Congress before the requirements became more formalized. In 1957, FIDE introduced norms (qualifying standards) for FIDE titles. [2] Two further subordinate titles, FIDE Master and Candidate Master, were created in 1978 and 2002 respectively.

Similar titles are awarded by the International Correspondence Chess Federation, and by the World Federation for Chess Composition for both composing and solving chess problems. [3] These bodies work in cooperation with FIDE but are now independent of it.

The titles of Grandmaster, International Master, FIDE Master and Candidate Master are available to all over-the-board chess players. The requirements for each title have varied over time, but generally require having demonstrated a prescribed level of achievement in tournaments at classical time controls under FIDE-approved conditions.

The title Grandmaster is awarded to outstanding chess players by FIDE. Apart from World Champion, Grandmaster is the highest title a chess player can attain. Once achieved, the title is generally held for life but on rare occasions it has been revoked in cases of cheating. In chess literature it is usually abbreviated to GM. The abbreviation IGM for International Grandmaster can also sometimes be found, particularly in older literature.

The usual way to obtain the title is to achieve the required title norms over 27 or more games and a FIDE rating of 2500 or more. Broadly, a norm is a grandmaster-level performance in a FIDE-approved tournament. The precise definition of a norm is complex and has frequently been amended, but in general a grandmaster norm is defined as a performance rating of at least 2600 over 9 or more games. In addition, the field must have an average rating of at least 2380, must include at least three grandmasters, and must include players from a mix of national federations. [5]

The title may also be awarded directly without going through the usual norm requirements in a few high level tournaments, provided the player has a FIDE rating of over 2300:

Beginning with Nona Gaprindashvili in 1978, a number of women have earned the GM title. Since about 2000, most of the top 10 women have held the GM title. This should not be confused with the Woman Grandmaster (WGM) title.

At 12 years, 4 months and 25 days, Abhimanyu Mishra became the youngest person ever to qualify for the Grandmaster title in July 2021. [7]

The title International Master is awarded to strong chess players who are below the level of grandmaster. Instituted along with the Grandmaster title in 1950, it is a lifetime title, usually abbreviated as IM in chess literature.

The usual way to obtain the title is to achieve the required title norms over 27 or more games and a FIDE rating of 2400 or more. Broadly, a norm is an International Master-level performance in a FIDE-approved tournament. The precise definition of a norm is complex and has frequently been amended, but in general, an IM norm is defined as a performance rating of at least 2450 over 9 or more games. In addition, the field must have an average rating of at least 2230, must include at least three International Masters or Grandmasters, and must include players from a mix of national federations. [5]

There are also several ways the IM title can be awarded directly without going through the usual norm process, provided the player has a rating of at least 2200. From July 2017, these are as follows:

After becoming an IM, most professional players set their next goal as becoming a Grandmaster. It is also possible to become a Grandmaster without ever having been an International Master. Larry Christiansen of the United States (1977), Wang Hao of China, Anish Giri of The Netherlands, and former world champions Mikhail Tal of Latvia and Vladimir Kramnik of Russia all became Grandmasters without ever having been an IM. Bobby Fischer of the United States attained both titles solely by virtue of qualifying for the 1958 Interzonal (IM title) and 1959 Candidates Tournament (GM title), only incidentally becoming IM before GM. The more usual path is first to become an IM, then move on to the GM level.

Introduced in 1978, [9] FM ranks below the title of International Master but ahead of Candidate Master. Unlike the Grandmaster and International Master titles, there is no requirement for a player to achieve norms. The usual way for a player to qualify for the FIDE Master title is by achieving an Elo rating of 2300 or more. [5] There are also many ways the title can be gained by players with a rating of at least 2100 but less than 2300; for example by scoring at least 65% over a minimum of 9 games at an Olympiad, or by winning certain tournaments. [6]

The youngest FM ever in chess history is Alekhine Nouri of the Philippines who was awarded the title after winning the 14th ASEAN Age Group Chess Championships 2013 in Thailand at age 7. [10]

Introduced in 2002, [11] the usual way for a player to qualify for the Candidate Master title is by achieving an Elo rating of 2200 or more. For players rated over 2000 but under 2200, there are many other ways to gain the title, for example by scoring 50% over 7 or more games at an Olympiad. [6] Candidate Master ranks below other open FIDE titles.

Though the open FIDE titles are not gender-segregated, the following four titles given by FIDE are exclusive to women and may be held simultaneously with an open title. The requirements for these titles are about 200 Elo rating points lower than the requirements for the corresponding open titles. These titles are sometimes criticized and some female players elect not to take them, preferring to compete for open titles. For example, Grandmaster Judit Polgár, in keeping with her policy of playing only open competitions, never took a women's title. [12]

Woman International Master is next to the highest-ranking title given by FIDE exclusively to women. FIDE first awarded the WIM title (formerly called International Woman Master, or IWM) in 1950. [15]

The WIM title has lower requirements than the unrestricted International Master (2400) title. The runners-up in the World Girls Junior Championship are automatically awarded the WIM title. The current regulations can be found in the FIDE handbook. [5]

The WFM title is just above Woman Candidate Master in the women-only titles given by FIDE. This title may be achieved by gaining a FIDE rating of 2100 or more. [5] FIDE introduced this title in 1978. [15]

Woman Candidate Master is the lowest-ranking title awarded by FIDE. [14] This title may be achieved by gaining a FIDE rating of 2000 or more. [5] FIDE introduced this title in 2002. [15]

Arena titles can be earned online using FIDE's server, and are intended for players in the lower rating band. These titles are valid OTB (Over-the-board). Should a player with an arena title gain an over the board FIDE title, this title replaces their arena title. [17]

Arena Grandmaster (AGM) is the highest online title. It is achieved by a series of 150 bullet games, 100 blitz games or 50 rapid games with a performance rating of over 2000. [18]

Grandmaster (GM) is a title awarded to chess players by the world chess organization FIDE. Apart from World Champion, Grandmaster is the highest title a chess player can attain. Once achieved, the title is held for life, though exceptionally it has been revoked for cheating. The abbreviation IGM for International Grandmaster is also sometimes used, particularly in older literature.

Lone Pine International was a series of chess tournaments held annually in March or April from 1971 through 1981 in Lone Pine, California. Sponsored by Louis D. Statham (1907–1983), millionaire engineer and inventor of medical instruments, the tournaments were formally titled the Louis D. Statham Masters. The events were seven- to ten-round Swiss system tournaments, with entrance requirements that made them the strongest recurring Swiss tournaments in the U.S. in the 1980s. Grandmaster Isaac Kashdan served as the tournament director.

Below is a list of events in chess during the year 2008, and a list of the top ten players during that year:

Wang Yu is a Chinese chess player who holds the FIDE titles of International Master (IM) and Woman Grandmaster (WGM). 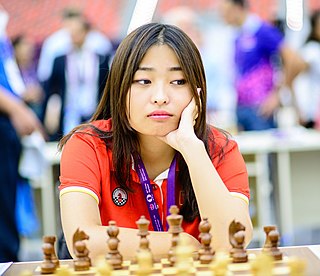 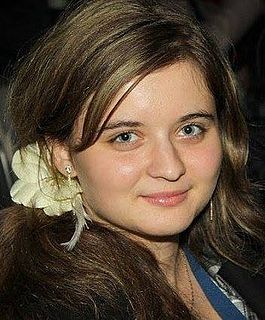 Sabina-Francesca Foişor is a Romanian American chess player holding the title of Woman Grandmaster (WGM). She competed in the Women's World Chess Championship in 2008 and 2017. Foisor won the US women's championship in 2017.

Zhansaya Abdumalik is a Kazakhstani chess player who holds the title of Grandmaster (GM). She is the first Kazkakhstani woman, and the 39th woman overall, to earn the GM title. Abdumalik has a peak FIDE rating of 2505 and has been ranked as high as No. 11 in the world among women. Abdumalik has been a two-time girls' World Youth Champion as well as a girls' World Junior Champion. She is also a two-time Kazakhstani women's national champion, and has represented Kazakhstan in women's events at the Chess Olympiad, World Team Chess Championship, and the Asian Nations Chess Cup. 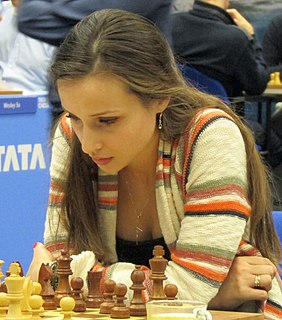 Sopiko Guramishvili is a Georgian-born Dutch chess player, author, and commentator who holds the titles of International Master (IM) and Woman Grandmaster (WGM). Having represented Georgia for the bulk of her playing career, she has been an under-16 girls' World Youth Champion and an under-18 girls' Georgian national champion. Guramishvili has a peak FIDE rating of 2441 and has been ranked as high as No. 42 in the world among women. 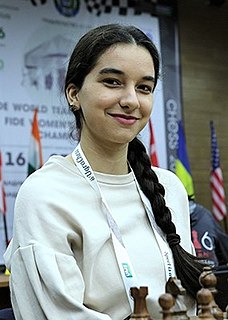 Gunay Vugar qizi Mammadzada is an Azerbaijani chess player who holds the titles of International Master (IM) and Woman Grandmaster (WGM) through the International Chess Federation (FIDE). She has been an under-10 girls' World Youth Champion, and both an under-8 and an under-14 girls' European Youth Champion. Mammadzada is a two-time Azerbaijani women's national champion, which she achieved in 2017 and 2019. She has represented Azerbaijan at the Chess Olympiad, the World Team Chess Championship, and the European Team Chess Championship, winning both team and individual bronze medals at the latter in 2019. Mammadzada has a peak FIDE rating of 2460 and has been ranked as high as No. 25 in the world among women.

Sarai Sanchez Castillo is a Venezuelan chess player who holds the titles of Woman Grandmaster and International Master. 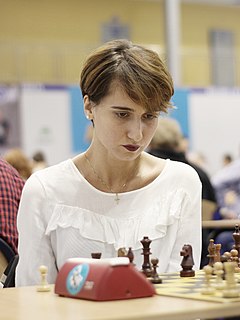 Srija Seshadri, is an Indian female chess player. FIDE awarded her the title of woman grandmaster in July 2019.

V. Varshini, is an Indian female chess player. FIDE awarded her the title of woman grandmaster in September 2019.