Fudbalski Klub Čelik Nikšić (Montenegrin: Фудбалски клуб Челик Никшић) was an football club based in Nikšić, Montenegro. Founded in 1957, they last competed in and were relegated from the Montenegrin Third League in 2019, and they have not competed since. The team once won the Montenegrin Cup trophy and played three seasons in the UEFA Europa League.

FK Čelik was established in 1957, following the bankruptcy of former FK Javorak. The name "Čelik" was given in memory of Petar Saveljić, who had worked at the local steel mill before playing football with Savo Pejović. [1]

First seasons of their existence, Čelik spent in the lowest-tier competition (Titogradski podsavez). First successes for Čelik came with the beginning of sixties. On 1961, as a member of Fourth League, the team won the Montenegrin Republic Cup. The same year, Čelik debuted in the Montenegrin Republic League (third level). [2] Significant success came on season 1967-68. As a runner-up of Republic League, Čelik gained its first-ever promotion to the Yugoslav Second League. In that competition, Čelik played its first official games against Nikšić strongest-side FK Sutjeska and notable Montenegrin team FK Budućnost, but they were relegated, with scores of four wins, six draws and 20 defeats.

On 1992, after the breakup of SFR Yugoslavia, FK Čelik started to play in the football system of newly formed FR Yugoslavia. With the support of Nikšić steel mill, the team gained promotion to 1996-97 Yugoslav Second League. In the Second League, Čelik played one of their best seasons - finishing as a third-placed team, only five points behind the First League promotion. Same season (1996–97), Čelik won their second Montenegrin Republic Cup.

From 1996 to 2004, FK Čelik spent eight consecutive seasons in Yugoslav / Serbia and Montenegro Second League. On season 1997/98, they were close to First League promotion, but failed to qualify, finished with only one point less than first-placed Mogren.

Following the independence of Montenegro, FK Čelik became a member of the Montenegrin Second League inaugural season (2006–07). Finishing in second place in the 2007-08 season, the team participated in the First League playoffs. Their rival in that stage was local side FK Sutjeska. Two playoff games watched more than 17,000 spectators and Čelik didn't succeed to gain promotion (0:0, 0:1).

Winning the cup allowed the club to enter the 2012-13 UEFA Europa League qualifying phase, where they beat Bosnian powerhouse Borac Banja Luka on away goals (1:1, 2:2). Facing Ukrainian club Metalurh Donetsk in the second qualifying round, the team garnered even more attention from the local media as the players and staff traveled from Nikšić to Donetsk (2,143 kilometers) by bus, which, after being denied entry to Moldova, [4] lasted approximately 70 hours on the road. [5] The team, having arrived in Donetsk on the same day of the match, lost the first leg 7-0, giving Metalurh its most historic win in UEFA competition. [6] While Čelik played with much more resistance in the second leg, the team was eliminated from the UEFA Europa League after the game ended 2-4 for Metalurh. [7]

Soon after their European debut, FK Čelik started their first-ever season in Montenegrin First League. They won third-place, behind Montenegrin strongest teams Sutjeska and Budućnost, but also played in the final of 2012–13 Montenegrin Cup. This time, FK Čelik was defeated by FK Budućnost (0-1).

With that results, team from Nikšić played another European season, in 2013–14 UEFA Europa League. Their opponent was Hungarian side Budapest Honvéd FC (1-4; 0-9).

Next year, FK Čelik again won third place in the First League, with another performance in 2014–15 UEFA Europa League qualifying. This time, they faced Koper from Slovenia (0-5; 0-4).

Before the start of the 2014-15 season, the club informed the Football Association of Montenegro that because of financial problems it would not be able to play the 2014–15 season in the top flight, [8] and re-emerged in the Montenegrin Third League.

After two seasons in the lowest-tier, FK Čelik gained promotion to the 2016-17 Second League. In March 2018, the club was on the brink of collapse [9] and they were relegated from the Montenegrin Third League in 2019, [10] effectively ending the club's existence.

For the first time, FK Čelik played in European competitions on season 2012–13. Until now, they played three seasons in European cups.

Below is the squad of FK Čelik for Montenegrin Second League 2017-18 season. [11] Note: Flags indicate national team as defined under FIFA eligibility rules. Players may hold more than one non-FIFA nationality.

"FAP Mašina" is the popular name for the most ardent FK Čelik fans. They have been established in 2001 in Nikšić. Notable days, group remember in period 2007-2014, when the stands were occupied by hundreds of FAP Mašina members. Their main rival is FK Sutjeska Nikšić with whom they contest the Nikšić derby. [12] 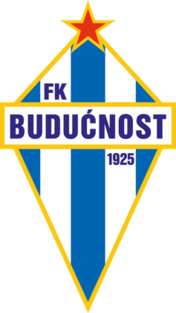 Stadion kraj Bistrice, also known as Stadion Gradski Nikšić, is a multi-purpose stadium in Nikšić, Montenegro. It is currently used mostly for football matches and is the home ground of FK Sutjeska and a host of Montenegro national under-21 football team matches. After last renovation, the stadium has a total of 5,214 seats.

The 2008–09 Montenegrin First League was the third season of the top-tier football in Montenegro. The season began on 9 August 2008 and ended on 30 May 2009. The defending champions are Budućnost Podgorica.

The 2011–12 Montenegrin First League is the sixth season of the top-tier football in Montenegro. The season began on 6 August 2011 and will end at a yet unknown date in 2012, with a winter break beginning on 8 December 2011. Mogren are the defending champions.

The 2012–13 Montenegrin First League was the seventh season of the top-tier football in Montenegro. The season began on 11 August 2012 and ended on 1 June 2013. The mid-season winter break began on 2 December 2012 and ended on 7 March 2013. FK Budućnost Podgorica are the defending champions. 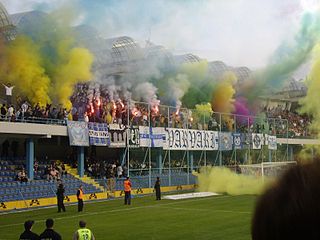 After the end of every competitive season, football clubs from Montenegro play in European competitions.
Teams from Montenegro have been playing on the international scene since they represented SFR Yugoslavia during the 1970s. Since 2006, Montenegrin teams have played as representatives of independent Montenegro, and qualified through the Montenegrin First League and Montenegrin Cup.
Currently, four Montenegrin clubs take part in UEFA European Cups. The champion of the First Montenegrin League plays in UEFA Champions League qualifiers. The second and third placed team from the First League play in UEFA Europe League qualifiers. The winner of the Montenegrin Cup also plays in the Europa league.

The 2017–18 Montenegrin First League was the 12th season of the top-tier football in Montenegro. The season began on 5 August 2017 and ended on 26 May 2018. Budućnost Podgorica are the defending champions.

The 2017–18 Montenegrin Cup was the 11th season of the knockout football tournament in Montenegro. This competition began on 23 August 2017 and ended on 30 May 2018. The winners of the competition earned a spot in the 2018–19 UEFA Europa League.