FK Mladá Boleslav is a Czech football club based in the city of Mladá Boleslav [ˈmladaː ˈbolɛslaf] . The club currently plays in the Czech First League.

Mladá Boleslav were runners up in the 2005–06 Czech First League and went on to play in the 2006–07 UEFA Champions League, winning their opening tie against Vålerenga although they were eliminated in the third qualifying round by Galatasaray. The club won the Czech Cup in 2011 and qualified for the 2011–12 UEFA Europa League, although they were defeated over two legs by AEK Larnaca.

The team was promoted to Czech First League for the first time in its history in 2004 and in their first top-flight season fought against relegation, eventually finishing in 14th place. [1] The club's greatest success was achieved in the 2005–06 season, as they finished runners-up in the Czech First League, earning a place in the qualifying rounds of the UEFA Champions League. They came through their first tie, defeating Vålerenga (3–1 and 2–2), then lost against Galatasaray (2–5 away, 1–1 home), dropping into the UEFA Cup first round. The club went on to achieve a surprising 4–3 aggregate victory over Marseille (1st leg: 0–1, 2nd leg 4–2). However, the team was eliminated after reaching the group stage, taking just 3 points from 4 matches (Panathinaikos 0–1, Hapoel Tel Aviv 1–1, Paris Saint-Germain 0–0, Rapid București 1–1).[ citation needed ]

The following season, the club qualified directly for the first round of the UEFA Cup after finishing 3rd in the league. (Luboš Pecka was the top goalscorer in the league that year.) Qualification for the group stage was only narrowly secured by beating Palermo 4–2 on penalties after a nail biting 1–1 aggregate scoreline. On the verge of being eliminated with the score reading 1–0 Palermo, (with their goal in the first leg still standing) in the 2nd leg, Tomáš Sedláček scored the winner in the 2nd leg with only seconds to spare. In their group Mladá Boleslav defeated IF Elfsborg 3–1, but again failed to reach the knockout stages of the competition after losing matches against Villarreal 1–2, AEK Athens 0–1 and Fiorentina 1–2. The club subsequently achieved a 7th place league finish in the 2007–08 season, missing out on European qualification.[ citation needed ]

The major sponsor of the club is Škoda Auto. [2]

Highlighted players are in the current squad. 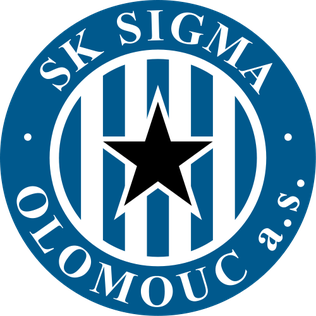 FK Viktoria Žižkov is one of the oldest football clubs in the Czech Republic, from Žižkov. It plays in the Czech National Football League, the second tier of football in the country. The club won the Czechoslovak First League title in the 1927–28 season. It has also won two editions of the Czech Cup. 1. HFK Olomouc is a football club in the Czech Republic, based in Olomouc. The club is currently playing in the Czech Fourth Division. The club previously played in the Czech 2. Liga from 2005–06 until relegation in the 2008–09 season. In 2012–13, HFK Olomouc finished third in the Second Division but were relegated due to financial difficulties.

SK Spolana Neratovice was a Czech football club located in Neratovice and sponsored by Spolana. The club was founded in 1919. The club won the Bohemian Football League in the 1998–99 season and subsequently played four seasons in the Czech 2. Liga. After losing the support of the town and main sponsor Spolana, the club finished in 13th place in the 2002–03 Czech 2. Liga. The club subsequently merged with SK Kladno.

The 2012–13 Czech Cup was the twentieth season of the annual football knock-out tournament of the Czech Republic. It began on 22 July 2012 with the Preliminary Round and ended with the final on 18 May 2013. FK Baumit Jablonec, the winners of the competition qualified for the third qualifying round of the 2013–14 UEFA Europa League.

TJ Nový Jičín is a football club located in Nový Jičín, Czech Republic. It currently plays in Divize E, which is in the Czech Fourth Division.