He was born in Istanbul, at Soğukçeşme Sokağı, a small street between Topkapı Palace and Hagia Sophia. He attended the navy cadet school in 1916, was graduated in 1923 and from the Naval Academy in 1933. Korutürk saw active service on cruisers and submarines and later travelled abroad as naval attaché in Rome, Berlin and Stockholm. In 1936, he participated in Montreux Convention Regarding the Regime of the Turkish Straits as military advisor. He was made rear admiral in 1950 and commanded various units until he became admiral.

After his retirement in 1960 from the post of Commander of the Turkish Navy, Korutürk was appointed by the Head of State Cemal Gürsel as Turkish ambassador to the Soviet Union (1960-1964) and later to Spain (1964-1965).

In 1968, President Cevdet Sunay appointed him member of the senate. On 6 April 1973, the Grand National Assembly of Turkey elected him the 6th President of the Republic of Turkey. [1] During his term he presided over the 20 July 1974 Turkish Invasion of Cyprus after Archbishop Makarios III was ousted by the Greek officer-led Cypriot National Guard.

Korutürk served the constitutional term of seven years until 6 April 1980. Afterwards he became a senator until the coup d`etat in 1980. [2]

He married Emel Korutürk in 1944 and they had two sons and a daughter. [2] His surname, Korutürk, [3] was given to him by Mustafa Kemal Atatürk. Fahri Korutürk died in Moda, Istanbul. He was laid to rest in the Turkish State Cemetery in Ankara. 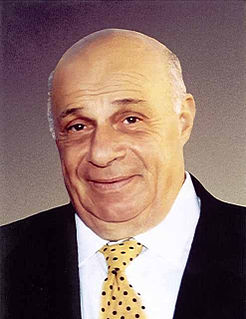 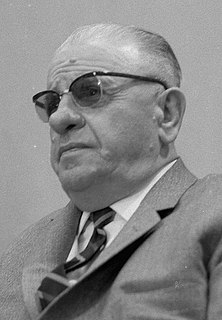 Cevdet Sunay was a Turkish politician and army officer, who served as the fifth President of Turkey from 1966 to 1973.

William James Crowe Jr. was a United States Navy admiral who served as the 11th chairman of the Joint Chiefs of Staff under Presidents Ronald Reagan and George H. W. Bush, and as the ambassador to the United Kingdom under President Bill Clinton.

Mahmut Sadi Irmak, was a Turkish academic in physiology, politician and former Prime Minister of Turkey.

Mehmet Tekin Arıburun was a Turkish soldier and statesman. He was born in then-Ottoman territory of Ishtib, Kosovo Vilayet. He was the last (Acting) President to be born outside the territory of present-day Turkey.

The Turkish Naval Academy is a four-year co-educational military academy and part of the National Defence University. It is located in the district of Tuzla in Istanbul. Its mission is to develop cadets mentally and physically for service as commissioned officers in the Turkish Navy. It must not be confused with Naval War Institute

There have been 21 elections for the President of Turkey since the establishment of the republic in 1923, electing 12 distinct Turkish citizens as president. Mustafa Kemal Atatürk and İsmet İnönü were elected four times, Celal Bayar was elected three times, Recep Tayyip Erdoğan was elected twice, Cemal Gürsel, Cevdet Sunay, Fahri Korutürk, Turgut Özal, Süleyman Demirel, Ahmet Necdet Sezer and Abdullah Gül were each elected once. Kenan Evren became the president without an election, so that he assumed the title by the ratification of the present constitution on 7 November 1982.

İhsan Sabri Çağlayangil was a Turkish politician, being a member of the Justice Party. He also served as Minister of Foreign Affairs three times in the 1960s and 1970s and as the Acting President of Turkey. 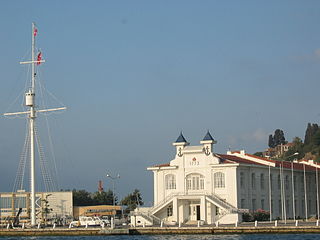 Deniz Lisesi ; known in the Ottoman period as the Mühendishane-i Bahr-i Hümâyûn and later as the Mekteb-i Bahriye-i Şahane ; is a Turkish naval high school located on Heybeliada Island in the Sea of Marmara, to the southeast of Istanbul, Turkey.

Florya Atatürk Marine Mansion, is a historic presidential residence located offshore in the Sea of Marmara in the Florya neighborhood of the Bakırköy district in Istanbul, Turkey.

Turkish presidential election was the election of the 7th president of Turkey in 1973 in the parliament.

İskenderun Naval Museum is a museum in İskenderun, Turkey.

Emel Korutürk was a Turkish painter and a former First Lady of Turkey.