Fair Head or Benmore (Irish : An Bhinn Mhór; The Great Cliff) is a 5 kilometre mountain cliff, close to the sea, at the north-eastern corner of County Antrim, Northern Ireland, whose rock face is formed into distinctive vertical columns like organ pipes. Fair Head is regarded as one of the best outdoor rock-climbing locations in Ireland, and its long cliff, up to 100 metres high in places, is considered one of the biggest expanses of climbable rock in Northwest Europe. [2]

Fair Head's distinctive rock formations may be recorded in Ptolemy's Geography (2nd century AD), being described as a point called Ῥοβόγδιον (Robogdion) (cf the Pictish Robogdii tribe) which may refer to Fair Head. The name may derive from the Proto-Celtic root *bogd, "bend". [3]

The headland of Fair Head rises 196 metres above the sea. Wild goats can be seen roaming among the rocks beneath the clifftops, where a walkway called The Grey Man's Path winds around the rugged coastline. From the road, a man-made Iron Age island or crannóg can be seen in the middle of a lake, Lough na Cranagh. The lakes are stocked with trout and can be fished during the summer months. All of the land at Fair Head is private farmland, and not owned by National Trust. Access is by the goodwill of local farm owners. Fair Head is the closest headland to Rathlin Island.

Many famous Irish artists have painted Fair Head, including Maurice Canning Wilks who painted a watercolour from a nearby beach.

Fair Head is regarded as one of Ireland's best outdoor rock climbing areas, along with the limestone sea-cliff of Ailladie in County Clare. [4] It does not attract a high volume of rock climbers due to its relatively remote location, and the physical strength and unfamiliar climbing techniques it requires of climbers. Its cliffs stretch over 5 km around the headland, rising to a maximum height of over 100m. They are not sea-cliffs but have been described as a mountain crag by the sea, since they tower above an extensive boulder field and their isolation and size gives climbing there a big-wall mountaineering feel.

The cliffs are composed of dolerite, giving a mixture of steep cracked walls, corners, and, in many places, sets of columns reminiscent of organ-pipes. The dolerite sits on top of a bed of chalk which is visible in places.

The cliffs abound in well-protected steep crack climbing, between one and four pitches long. Many of the cracks involve hand-jamming, so some climbers tape their hands to protect the skin from what they term "Fair Head rash". Other climbs involve off-width or full-width chimneying, which is not often encountered in other Irish crags. As with nearly all Irish crags, only traditional protection ("clean climbing") is used. The 2014 Fair Head guidebook, its 6th edition, lists over 430 routes from under grade VS 4c up to E6 6b, but more recent climbing includes routes up to E8 6c.

The first climbs at Fair Head were done in the mid–1960s by some Belfast–based climbers and members of the Dublin–based Spillikin Club. Most of these climbs followed loose and dirty chimneys and are rarely repeated nowadays, but the seed had been planted, and before the end of the sixties development of the crag had started in earnest. However, it was not long before the increasing political violence in the North started making its presence felt; the Fair Head area was generally unaffected, but the development of the crag slowed to a trickle during the early 1970s. However the attractions of Fair Head eventually proved irresistible and development picked up again in the late seventies, led by the husband-and-wife team of Calvin Torrans and Clare Sheridan and a number of other Dublin climbers. This small band devoted themselves to developing Fair Head, founded the Dal Riada Climbing Club (named after the ancient kingdom which included this area), and acquired a climbing hut nearby to accommodate themselves and other visiting climbers. There is still unclimbed rock at Fair Head; opportunities, mainly in the higher grades, are waiting for those who have the talent and dedication.

The cliffs are divided into several main sectors. From east to west, these are: [5]

Base camps are usually established near the tops of the descent routes; the walk-ins this far are pleasant and quite short, through the open grazing fields above the crag. However, access to some of the climbs themselves can be quite rough and time-consuming.

The Dal Riada Climbing Club formerly had the use of a series of buildings which they operated as climbing huts which they used to accommodate themselves and other visiting climbers, but this ended in 2007 when the last one was repossessed by its owners, the National Trust. [8] The most popular options now are either camping at a nearby campsite operated by a local farmer, or staying at a hostel in Ballycastle town, where there are bars and restaurants. [9]

Doolin is a coastal village in County Clare, Ireland, on the Atlantic coast. It is southwest of the spa town of Lisdoonvarna. It is a noted centre of traditional Irish music, which is played nightly in its pubs, making it a popular tourist destination. There are numerous nearby archaeological sites, many dating to the Iron Age and earlier. Doonagore Castle and Ballinalacken Castle are also in the area. The area was officially classified as part of the West Clare Gaeltacht prior to the 1950s, and maintains a connection with Irish-speaking areas - including via its maritime connection with the Aran Islands.

Great Gable is a mountain in the Lake District, United Kingdom. It is named for its appearance as a pyramid from Wasdale, though it is dome-shaped from most other directions. It is one of the most popular of the Lakeland fells, and there are many different routes to the summit. Great Gable is linked by the high pass of Windy Gap to its smaller sister hill, Green Gable, and by the lower pass of Beck Head to its western neighbour, Kirk Fell. 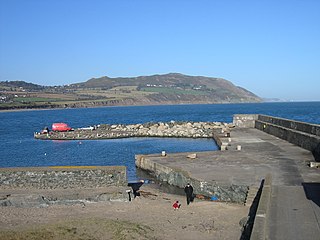 Bray Head is a 241 m (791 ft) hill and headland located in northern County Wicklow, Ireland, between the towns of Bray and Greystones. It forms part of the Wicklow Mountains and is a popular spot with hillwalkers. At the top of the head is a concrete cross which was placed there in 1950 during the holy year. Every Good Friday, hundreds of local people climb to the top of the head in a Good Friday procession marking the stations of the Cross as they go along, with the final station being held at the holy year cross. The headland and adjacent lands were designated under a Special Amenity Area Order in March 2008. 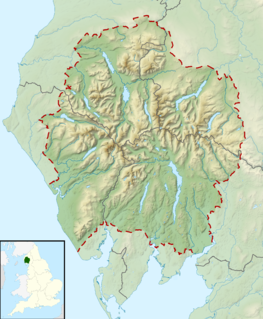 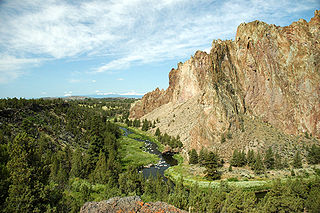 Smith Rock State Park is a state park located in central Oregon's High Desert near the communities of Redmond and Terrebonne. The day-use area of the park is open daily from dawn to dusk. The park also has a camping area as well that accommodates tent camping only. Its sheer cliffs of tuff and basalt are ideal for rock climbing of all difficulty levels. Smith Rock is generally considered the birthplace of modern American sport climbing, and is host to cutting-edge climbing routes. It is popular for sport climbing, traditional climbing, multi-pitch climbing, and bouldering. 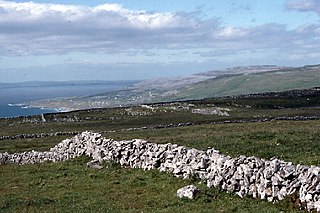 Fanore is a small village in County Clare, on the west coast of Ireland. The area was officially classified as part of the West Clare Gaeltacht, an Irish-speaking community, until 1956.

Sgorr Ruadh is a mountain situated in the mountainous area between Strath Carron and Glen Torridon in Wester Ross in the Highland Region of Scotland. It is located in Coire Lair near Achnashellach along with two other fine mountains, Beinn Liath Mhòr and Fuar Tholl, and is often climbed in conjunction with one or both of these other mountains. 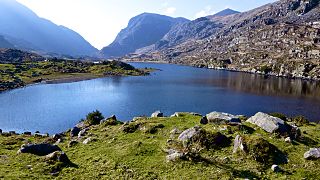 The Gap of Dunloe, also recorded as Bearna an Choimín, is a narrow mountain pass running north-south in County Kerry, Ireland, that separates the MacGillycuddy's Reeks mountain range in the west, from the Purple Mountain Group range in the east. It is one of Kerry's most popular tourist destinations due to its scenery.

Dalkey Quarry is a long disused 19th century granite quarry located on Dalkey Hill in the Dublin suburb of Dalkey, which has become one of the most popular rock climbing locations in Ireland, with over 350 routes, some of which are amongst the hardest single-pitch rock climbs in Ireland.

Ailladie, is an 800-metre-long (2,600 ft) west-facing limestone sea cliff, that varies in height from 8 metres (26 ft) to 35 metres (115 ft), situated on the coast of The Burren in County Clare, Ireland. Ailladie is one of Ireland's most highly regarded rock-climbing locations, particularly for high technical grade climbs and deep-water soloing. It is also a location for shore-angling competitions, and, with its cliffs and view of the Aran Islands, a popular photography stop for tourists. 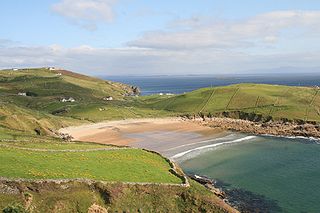 Muckross Head is a small peninsula in the parish of Kilcar about 10 km west of Killybegs, Co. Donegal, in north-western Ireland. It contains a popular rock-climbing area, noted for its unusual horizontally layered structure.

Michael Fowler is an award-winning British mountaineer and author.

Frank Winder was an Irish professor of biochemistry, a naturalist, and one of Ireland's leading rock climbers in the 1950s and 1960s. 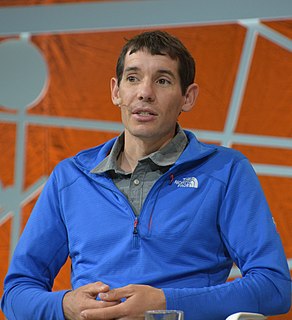 Alexander Honnold is an American rock climber best known for his free solo ascents of big walls. His 2017 accomplishment of free soloing El Capitan, in Yosemite National Park, is regarded as one of the greatest athletic achievements of all time.

Aill na Cronain is an inland west-facing limestone crag in The Burren in County Clare, Ireland. It is popular with novice rock climbers due to the number of short single-pitch 10–20 metre rock climbing routes in the S to HS rock climbing grades. It is beside the Aillwee Caves.

Ballyryan or Ballyreen is a small inland mostly west-facing limestone crag in The Burren in County Clare, Ireland. It is popular with rock climbers due to its easy access, the range of short easy-to-intermediate rock climbs, and its close proximity to the much larger and highly regarded, Ailladie rock-climbing sea-cliff; Ailladie is also locally known as the Ballyreen Cliffs or Ballyreen Point.