Wong's previous two albums, Michael's First Album and Ray of Light, stirred up a fan base but did not make much ground in terms of record sales. His fans had to wait another two years before Wong finally launched his third album, Fairy Tale. After rejecting the first few songs he listed himself for the album with his sense of perfection, Wong eventually re-selected some songs himself and finally rooted for his ten favourite songs to be cut into the album, of which six were composed by himself. His two years of work paid off when this album immediately attained success, and became critically acclaimed as Wong's best-selling album.

The first single from this album, also called Fairy Tale, was composed by himself. Wong, who is more of a composer and hardly wrote lyrics, asked about 30 lyricists for suggestions for this particular song. After finally adding a finishing touch to the song with lyrics he wrote himself, he then left it to be arranged and produced by the experienced Japanese producer, Taichi Nakamura. Fairy Tale is considered by many fans as Wong's strongest single. It became number one at the Baidu 500 immediately after it was released in January 2005, making it to the top of the download counter for 15 weeks. The single is arguably the most successful Chinese language song in the 21st Century. As of 2007 it is still among the top in the karaoke charts. Wong became the first Malaysian to win four main awards in the Chinese music scene's biggest award show, the Hong Kong TVB8 Golden Music Awards on 3 December 2005. He won Best Composition, Best Composer/Artist, Top Ten Songs of the Year, and Best of the Year's Top 10 Songs.

The music video accompanying Fairy Tale has been the subject of heated debate. It depicts Wong playing the song at a concert, transmitted to a girl in a hospital bed by phone. Intermittent flashbacks during the song reveal that she had a nosebleed before collapsing. She was most likely suffering from some form of cancer. At the conclusion of the video, she dies, and a voice-over says, "When the whole world ignores me, only you can never ignore me okay?" 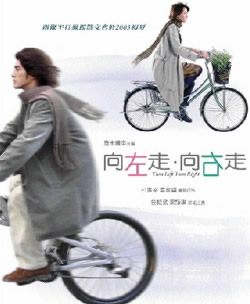 Turn Left, Turn Right is a 2003 joint Hong Kong-Singaporean romance film, filmed in Taipei, Taiwan. Produced and directed by Johnnie To and Wai Ka-Fai, the film stars Takeshi Kaneshiro and Gigi Leung. The story is based on the illustrated book A Chance of Sunshine by Taiwanese author Jimmy Liao, who makes a cameo appearance with his wife and daughter in the film. It is also the first Chinese-language Asian film ever from produced and distributed by Warner Bros.

Na Ying is a Chinese singer and musical judge. Her most recent role is on Chinese TV singing shows such as The Voice of China. 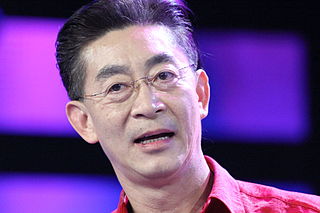 Michael Wong Kong Leong, also known mononymously by his Chinese name Guang Liang, is a Malaysian Chinese singer and composer who has sung and written many love-themed ballads and love songs, many of which have high popularity. He is popularly known in the Mandopop scene as the "Prince of Love Songs" (情歌王子). 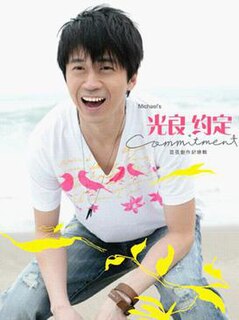 約定: Commitment is Michael Wong's fourth solo album release. It consists of two CDs. The first disc includes new tracks and songs originally written for other singers while the second disc is compiled of piano instrumental renditions of his previously released songs.

Yat yan fan sik leung gok is a 1995 EP recorded by Chinese Cantopop singer Faye Wong when she was based in Hong Kong.

Not Yet a Woman, is Taiwanese Mandopop artist Rainie Yang's fourth Mandarin studio album. It was released by Sony Music Taiwan on 7 November 2008.

Shēngshēng Zuì Rúlán is the first studio album from Chinese singer Alan. It features covers of contemporary Chinese language hit songs. The album was re-released a year later, with the title Yùjiàn Ālán, with a different track order and one extra track.

Tarcy Su is a Taiwanese singer and actress who was popular in the 1990s during her recording career with Rock Records.

Heartbeat is Ruby Lin's first album. Lin began a singing career with a five track EP in 1999. It released in Hong Kong first amongst Asian countries. Its first single "Heartbeat" is only one Cantonese song in this album. 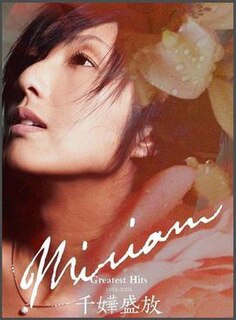 Jee Seok-jin is a South Korean comedian, singer, television presenter, actor, and broadcaster. He graduated from Ajou University with a bachelor's degree in Business Administration.

Sad Fairy Tale is a 2012 Chinese-South Korean romantic comedy film directed by Zhengchao Xu. The story is adapted from true events in the life of Wang Xiao Yi(汪小一）, friend of the director.

Ia Ia, I Do, is a 2012 co-produced Mainland China and Taiwan romance comedy drama. The "Ia Ia" from the title is the sound of whining in Chinese which is pronounced "Ah Ya Ah Ya". The drama stars Dylan Kuo, Tammy Chen, Song Min Yu, Re Yi Zha and Xu Yue. Directed by Yang Guan Yu and Ke Zheng Ming, the drama is produced by Chinese web streaming site Tudou. Filming began on September 5, 2011 on location in Taiwan and Dongshan County in Fujian province, China and finished on December 9, 2011.

Han Lei, also known in Mongolian as Senbor, is a Chinese folk and pop singer-songwriter.