Last updated May 16, 2021
Chinese businessman and citizen journalist
In this Chinese name, the family name is Fang .

Fang Bin (Chinese :方斌) is a Chinese businessman, citizen journalist and whistleblower who used YouTube and WeChat to broadcast images of Wuhan during the COVID-19 pandemic. He was arrested several times between February 1 and 9, 2020. He has been missing since his arrest on February 9, 2020.

Fang Bin was a businessman living in Wuhan, Hubei in January 2020 when the COVID-19 outbreak hit China. [1]

Fang recorded his first video on January 25, 2020. His shots mostly show himself and the situation in different districts of Wuhan, and attracted a few thousand views. Videos were uploaded to YouTube to bypass the government's censorship of Chinese platforms. While YouTube is supposed to be blocked in China, it remains accessible through virtual private networks. [2]

On February 1, 2020, Fang released a new video showing the piling up of corpses at the back of a minivan in front of a Wuhan hospital. [2] The video was shared on Twitter by Chinese journalist Jennifer Zeng. [1] Fang was arrested on the same day, warned and eventually released during the night. [2]

In February 2020, Fang and two other citizen journalists and whistleblowers, Chen Qiushi and Li Zehua, were arrested and went missing in Wuhan. Chen, a lawyer who arrived in Wuhan on January 23, disappeared first on February 6; one week prior, he had uploaded a video criticising the Chinese government's manipulation of information which ended with the sentence "I am not afraid to die! You think I am afraid of you communist party?". [3] [4] Li, another citizen journalist, went missing in late February, [5] but reappeared in April posting a neutral, patriotic video, in contrast to his previous tone. [6]

Two days before Chen's arrest, on February 4, the police came twice to Fang's apartment. He recorded the scene and refused to let them in without a warrant, worried that they had come in large numbers to arrest him (he counted at least four officers). [3] Fang kept making videos from his apartment during the following days, criticising the government's propaganda and its choice to arrest Chen and Li Wenliang. [7] On February 9, he released his last video: a 12-second clip showing a piece of paper with the sentence "resist all citizens, hand the power of the government back to the people" written on it. He has been missing ever since. [7] [8]

Fang Fang is the pen name of Wang Fang, a Chinese writer who won the Lu Xun Literary Prize in 2010. She was born in Nanjing, Jiangsu Province. She went to Wuhan University in 1978 to study Chinese. In 1975, she began to write poetry and in 1982, she launched her first novel Da Peng Che Shang (大篷车上). In 1987, she released her masterpiece "Feng Jing"(风景), and won the 1987-1988 national outstanding medium-length novel award. Her other work, including Qin Duan Kou (琴断口), and Xing Yun Liu Shui (行云流水), "Jiang Na Yi An" (江那一岸), "Yi Chang San Tan" (一唱三叹), have been well received as well. Since she cares much about the poor, many of her works reflect their genuine lives.

Picking quarrels and provoking trouble is a crime under the law of the People's Republic of China. It comes under article 293 of the 1997 revision of the People's Republic of China's Penal Code, and carries a maximum sentence of five years. The crime is defined as undermining public order by creating a disturbance in a public place. It is a type of criminal disorderly conduct. 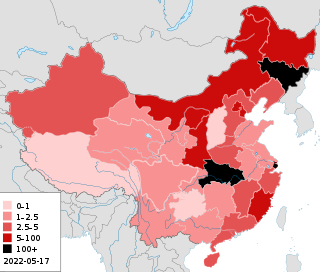 This article lists major evacuations conducted by several countries as a result of the COVID-19 pandemic.

Chen Qiushi is a Chinese lawyer, activist, and citizen journalist who covered the 2019–20 Hong Kong protests and the COVID-19 pandemic which included criticism of the government response. He has been missing since 6 February 2020 after reporting on the coronavirus outbreak in Wuhan. The Chinese government reportedly informed Chen's family and friends that he has been detained for the purpose of COVID-19 quarantine. Critics, including media freedom groups, have expressed skepticism about government motives, and have unsuccessfully called on the government to allow outside contact with Chen. 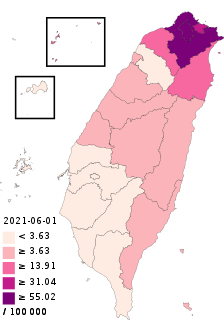 The COVID-19 pandemic in Taiwan is part of the worldwide pandemic of coronavirus disease 2019 caused by severe acute respiratory syndrome coronavirus 2. The pandemic has had a smaller impact in Taiwan than in most other industrialized countries, with a total of eleven deaths as of 11 April 2021, a rate of 0.042 deaths per 100,000 people. The number of active cases peaked on 6 April 2020 at 307 cases, the overwhelming majority of which were imported.

Li Zehua is a Chinese citizen journalist, rapper and YouTuber. Li was born in Pingxiang, Jiangxi. After graduating from Communication University of China, he joined China Central Television (CCTV) as a television presenter in 2016. 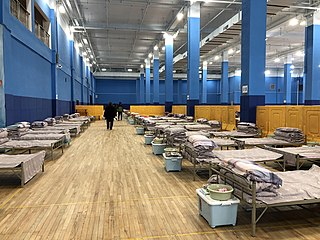 Zhang Zhan is a Chinese citizen journalist and former lawyer who was tortured by Chinese secret police and sentenced to four years in prison on the charges of "picking quarrels and provoking trouble" (寻衅滋事) for her reporting on the Chinese government's mishandling of the COVID-19 pandemic. She is the first citizen journalist to be sentenced for reporting on the pandemic in China, although at least 47 other journalists are currently in detention in China for their coronavirus reporting.

The Chinese government has engaged in disinformation to downplay the emergence of COVID-19 in China and manipulate information about its spread around the world. The government also detained whistleblowers and journalists claiming they were spreading rumors when they were publicly raising concerns about people being hospitalized for a "mysterious illness" resembling SARS.