Fang of the Sun Dougram

Fang of the Sun Dougram (太陽の牙ダグラム, Taiyō no Kiba Daguramu) is a 75-episode anime television series, created by Ryosuke Takahashi and Sunrise, and aired in Japan from October 23, 1981 to March 25, 1983 on TV Tokyo. A 1983 full-length feature film, Dougram: Documentary of the Fang of the Sun, summarized the series.

The series begins in a desert on the colony planet Deloyer, where the remains of a destroyed robot are resting as a red-haired woman is standing in front of it. The woman hallucinates what appears to be a group of armed soldiers alongside the robot in a non-destroyed state. A man named Rocky appears, leading to the woman running into his embrace where she cries tears of joy. After this, the series flashes back to an earlier time, in order to explain the circumstances leading up to the first episode.

Malcontents on the Deloyer colony agitate for the independence of their world from the Earth Federation. In an unexpected coup, the elected Governor declares martial law and sets himself up as absolute dictator. With the approval of the Federation, he rules the planet with an iron fist. In reaction, a ragtag group (including the governor's estranged son) rises in open rebellion, using a powerful prototype Combat Armor: the Dougram. Their goal is the end of the dictatorship and total independence from the Federation's influence.

The story follows the actions of the guerilla freedom fighters known as "The Deloyer 7." The war is fought across the planet Deloyer as the Federation vigorously pursues the rebels. The series is noted for its realistic use of not just the combat armors and support vehicles, but also military tactics. The series also followed a wide range of characters and political intrigue, with many shady characters switching sides throughout the series.

Crinn Cashim is the show's main character. Son of Governor Donan Cashim, he becomes trained in piloting the Soltic Roundfacer by Jacky Zaltsev, a Federation Ace, because of his father's political connections. When his father appears to be overthrown by a coup led by Colonel Von Stein, he pilots a Roundfacer while Federation forces battle Garcia's forces. He is stunned to learn that his father has actually sided with Von Stein in a secret plan, and eventually becomes angry at his father's forces in how they deal with the rebellion following the coup. Following a meeting with Dr. David Samalin, who introduces him to a combat armor he has designed, the Dougram, Cashim and his friends form The Fang of the Sun and join the rebellion against the Federation.

In S.C. 140 (Dougram time system, meaning Space Century), the Federal military asked for an all-terrain heavy-weapon system to deal with the varied geographic conditions of the colony worlds. Only two companies made it through the extensive requirements testing: Abitate and Soltic.

Abitate's F44A "Crabgunner" was a 12-meter, 4-legged walking tank. Soltic's own H8 "Roundfacer" was humanoid, with a single pilot located in the head. The simpler Crabgunner became the mainstay of the early Federation forces, but it was the Roundfacer that would revolutionize mechanized warfare. As the rebellion grows in number, the Federation introduces new models of Combat Armors to oppose it, many of them designed to fulfill specific roles (desert fighting, cold weather deployment, etc.). Unlike other anime, these new machines are production models and rarely one-of-a-kind prototypes (the Dougram itself being the most notable exception). Combat Armors used by the Sun Fang rebels are marked with a gold-bordered red triangle. The Federation Occupation Forces use gold chevrons to indicate the division they are assigned to (1st, 2nd, or 3rd).

Dougram was one of the first successors to the "Real Robot" genre created by Mobile Suit Gundam . The popular mechanical designer Kunio Okawara produced the designs for both shows. Dougram featured a similar plot centered around a small team fighting a running battle with a powerful enemy, using an advanced giant robotic prototype combat armor. The show was a surprise success, especially considering the heavy emphasis on military tactics which slowed the pace of the story, and further confirmed that military 'giant robot' science-fiction was here to stay. Takahashi and Sunrise would go on create a follow-up series, Armored Trooper Votoms , which used similar styling and themes but was otherwise unrelated in plot, characters or setting.

The diecast toys were produced in three sizes. The 1:144 scale "Collection Series" featured a hollow diecast body and leg structure, with plastic detail parts. The "Dual Model Series" (in two scales, 1:72 and 1:48) featured a zinc-diecast endoskeleton upon which plastic armor pieces were attached. Although the imported toys were physically identical to the Japanese ones, the packages were modified for American shelves. The 1:144 scale boxes had sleeves to be hung from pegs, while the larger toys had English-language stickers glued over the original boxes.

Takara also produced a magnetically jointed Dougram and several soft-vinyl toys. Although the vinyls did not have specific scales, they appeared to be between 1:100 and 1:60 scale. Toy manufacturer Seven, a Takara spin-off devoted to low-end toys, produced several plastic and rubber Dougram toys as well.

Neither the film nor the television series were released in North America. However, plastic model kit manufacturer Revell released many of Takara's Dougram kits as characters in their Robotech Defender series, and Takara sold much of their diecast toy line through American toy stores in the mid-Eighties. The detailed construction of the toys, the lack of any background info on the characters, and the revolutionary slogans printed on the boxes ("Fight! Dougram to save independence of the Deloyer!" or "We never approve your independence from our federation.") confused many.

In the mid-1980s, American gaming company FASA Corporation used the vehicle designs of the show for its Battletech miniature wargame and role-playing game. The first edition, then named BattleDroids, actually included two Japanese 1/144 model kits from Dougram. FASA was later sued by Playmates Toys and Harmony Gold USA for using designs from Macross (for example, Valkyrie fighters renamed Stinger,Wasp and Phoenix Hawk). The lawsuit was settled, and as a result post-lawsuit Battletech products no longer feature the designs taken from Macross . However, in the years since, the designs from Macross, Dougram, and Crusher Joe have since been re-introduced, Albeit with completely original artwork. The Dougram tabletop battling game also came out in 1984, the same year Battletech (Battledroids) was released in America. 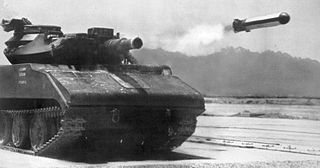 The Ford MGM-51Shillelagh was an American anti-tank guided missile designed to be launched from a conventional gun (cannon). It was originally intended to be the medium-range portion of a short, medium, and long-range system for armored fighting vehicles in the 1960s and '70s to defeat future armor without an excessively large gun. Developing a system that could fire both shells and missiles reliably proved complex and largely unworkable. 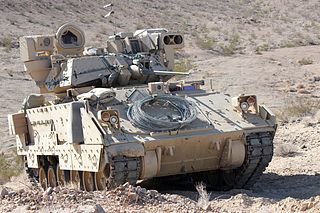 The M60 is an American second generation main battle tank (MBT). It was officially standardized as the Tank, Combat, Full Tracked: 105-mm Gun, M60 in March 1959. Although developed from the M48 Patton, the M60 tank series was never officially christened as a Patton tank, it has been sometimes informally grouped, as a member of the Patton tank family. The design similarities can be noted in the original variant of the M60 and the M48A2. The US Army considered it as a "product-improved descendant" of the Patton tank's design. The United States fully committed to the MBT doctrine in 1963 when the Marine Corps retired the last (M103) heavy tank battalion. The M60 tank series became America's primary main battle tank during the Cold War. Over 15,000 M60s were built by Chrysler. Hull production ended in 1983, but 5,400 older models were converted to the M60A3 variant ending in 1990.

In the fictional Macross Japanese anime series and its English adaptation Robotech, the first mass-produced transforming aerospace fighter mecha is called the VF-1 Valkyrie. The VF-1 Valkyrie is referred to as a variable fighter in the series Macross, but this is changed to the term veritech fighter in the Robotech series. 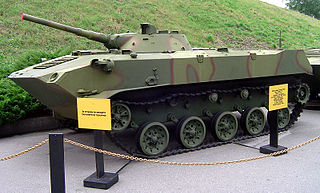 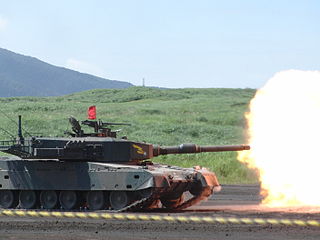 The Type 90 tank is a main battle tank (MBT) of the Japan Ground Self-Defense Force (JGSDF). It was designed and built by Mitsubishi Heavy Industries as a replacement for all deployed Type 61 and Type 74 tanks, and entered service in 1990. It is to be superseded by the Type 10 tank.

The Robotech Defenders are a line of scale model kits released by Revell during the early 1980s with an accompanying limited comic series published by DC Comics. Contrary to what their name seems to imply, the "'Robotech Defenders'" are not part of the Robotech Anime Universe adapted by Carl Macek and released by Harmony Gold USA, however they did adopt the same moniker and logo. 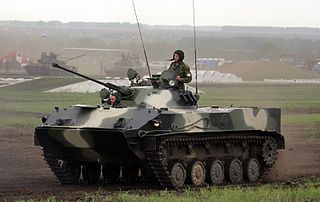 The Fahd is a 4x4 Egyptian armored personnel carrier, designed to fit the requirements of the Egyptian Military. It replaced older APCs in Egyptian service such as the BTR-40, and the Walid. It has been used by the United Nations.

The M2 Bradley, or Bradley IFV, is an American infantry fighting vehicle that is a member of the Bradley Fighting Vehicle family. It is manufactured by BAE Systems Land & Armaments, which was formerly United Defense. 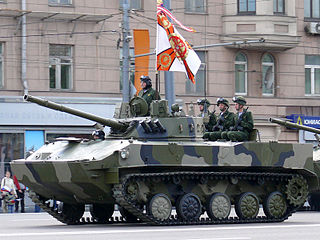 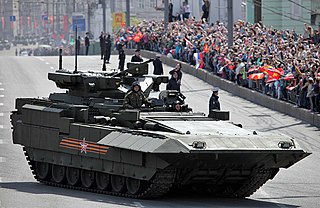 The T-15 Armata, with industrial designation "Object 149", is a Russian heavy infantry fighting vehicle first seen in public in 2015 during rehearsals for the Moscow Victory Day Parade. The T-15 is expected to replace the BMP-2 and MT-LB based platforms of the Russian Ground Forces.

The ZBD-03 or Type 03 is a Chinese airborne infantry fighting vehicle. It features a light-weight chassis and hydropneumatic suspension for airborne operations. Early prototypes received the designation ZLC-2000.