Faqus is identical with the ancient city of Phacusa [3] (Ancient Greek : ΦάκουσαPhákousa), [4] which was the capital of the nome of Arabia. [3] It was subsequently mentioned by the medieval geographers Qudama ibn Ja'far, Ibn Khordadbeh, Maqrizi, Istakhri, Ibn Hawqal, and al-Muqaddasi. [4]

Sais or Sa El Hagar was an ancient Egyptian town in the Western Nile Delta on the Canopic branch of the Nile. It was the provincial capital of Sap-Meh, the fifth nome of Lower Egypt and became the seat of power during the Twenty-fourth Dynasty of Egypt and the Saite Twenty-sixth Dynasty of Egypt during the Late Period. Its Ancient Egyptian name was Zau.

Hu is the modern name of an Egyptian town on the Nile, which in more ancient times was the capital of the 7th Nome of Upper Egypt.

Edku is a town in the Beheira Governorate, located east of Alexandria and west of Rashid, overlooking the Mediterranean Sea and there are natural gas liquefaction plant (LNG). Edku lies on a sandy strip behind Abi Qir Bay, in the northwestern Nile River delta. Immediately south is Lake Idku, a 58-square-mile (150-square-km) lagoon that stretches some 22 miles (35 km) behind and parallel to the coast and has a maximum width of 16 miles (26 km). Drained by Al-Madiyyah Channel, connecting with the Mediterranean, the lagoon is reputed to be the ancient Canopic branch of the Nile. Edku's isthmus position enables it to capitalize on the fisheries of both the lagoon and the Mediterranean. Other industries include rice milling and silk weaving. Edku is linked by coastal road and railway to Alexandria, 26 miles (42 km) to the west-southwest, and Rosetta, 12 miles (19 km) northeast. 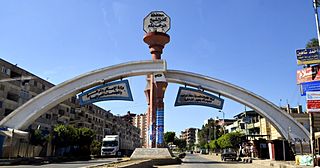 Sakha, also known by the ancient name of Xois is a town in Kafr El Sheikh Governorate of Egypt. Located near the center of the Nile Delta, it is a city of great antiquity, identified with the ancient Egyptian city of Khasut.

Maghagha is a city in Egypt, located on the west bank of the Nile. It is the northernmost city in the Minya Governorate.

Tarrana, known in classical antiquity as Terenuthis, is a town in Monufia Governorate of Egypt. It is located in the western Nile Delta, circa 70 km north-west of Cairo, between the southern prehistoric site of Merimde Beni-salame and the northern town of Kom el-Hisn. The ruins of ancient Terenuthis are found at Kom Abu Billo, northwest of the modern city.

Zefta is an Egyptian town in the Nile delta, within the Gharbia governorate. It is across the Nile from Mit Ghamr city of Ad Daqahliyah governorate.

Baltim is a resort in the Kafr El Sheikh Governorate, in the north coast of Egypt.

Hosh Essa is a city in Beheira Governorate, Egypt. 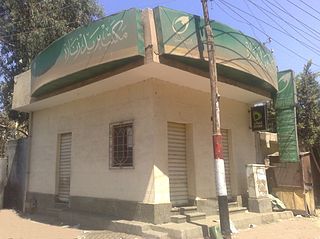 Tala, sometimes also transliterated Talla, is a city in the north part of Monufia Governorate, Egypt.

El Delengat is a city in Beheira Governorate in Egypt

Ibyar, also transliterated as Abyar or Ebiar, is a town in Gharbia Governorate of Egypt, on the Rosetta branch of the Nile.

Talbant Aga, known in classical antiquity as Thelbonthis, is a village in Dakahlia Governorate of Egypt. It is part of the markaz of Aga.

Ashmun al-Rumman is a village in the markaz of Dekernes in Dakahlia Governorate, Egypt. Known in classical antiquity as Zmoumis and in the Islamic Middle Ages as Ushmum-Tannah, Ashmun al-Rumman was formerly a major city, serving as a provincial capital.

Milig is a village in Monufia Governorate of Egypt, in the Nile Delta. It is a short distance northeast of Shibin El Kom.