Fausto 5.0 is the last part of a trilogy dedicated to the figure of Faust. The first two instalments were F@ust 3.0 (originally a play) and The Damnation of Faust (originally an opera). [1] All three films were developed for the screen by La Fura dels Baus, an experimental theatre group from Barcelona. [2]

A doctor – Fausto – on the verge of a nervous breakdown, meets a former patient – Santos Vella – who promises to grant his every wish. Reality starts dissolving and Fausto begins to lose control. [3] [4] [5]

José Antonio Domínguez Bandera, known professionally as Antonio Banderas, is a Spanish actor and singer. Known for his work in films of several genres, he has received various accolades, including a Cannes Film Festival Award and a European Film Award, in addition to nominations for an Academy Award, a Tony Award, two Primetime Emmy Awards, and five Golden Globe Awards.

Natalia Marisa Oreiro Iglesias is a Uruguayan actress, singer, songwriter, model, television presenter and fashion designer. Oreiro began her career in telenovelas. Since 2008 she has switched to work primarily in films. Oreiro has worked on social awareness shows and events for organizations like Greenpeace and UNICEF, the latter of which designated her as ambassador for Argentina and Uruguay in September 2011. She has been included in Esquire magazine's "The Sexiest Woman Alive Atlas" list.

La Fura dels Baus is a Spanish theatrical group founded in 1979 in Moià, Barcelona (Spain), known for their urban theatre, use of unusual settings and blurring of the boundaries between audience and actor. "La Fura dels Baus" in Catalan means "The ferret from Els Baus". According to a 1985 review of their London performance, published in NME, the group "create a kind of adult adventure playground of fun, danger, slapstick and fantasy".

Miguel Ángel Solá Vehil is an Argentine actor who has made over 60 film appearances in film and TV in Argentina since 1973.

Faust has inspired artistic and cultural works for over four centuries. The following lists cover various media to include items of historic interest, enduring works of high art, and recent representations in popular culture. The entries represent works that a reader has a reasonable chance of encountering rather than a complete catalog.

Eva María Garrido García, known professionally as Eva Yerbabuena, is a Spanish flamenco dancer. She formed her own dance company in 1998 and won Spain's National Dance Award in 2001. She is considered one of flamenco's leading performers.

Francisco Javier Gutiérrez Díaz is a Spanish film director, producer and writer. Two-Time European Golden Melies nominee, he is well known for his works like the short films Brazil and Norman's Room, and his feature film debut Before the Fall.

Peter Sullivan is an English film and television actor. 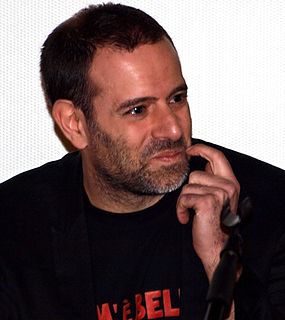 Trieste Science+Fiction Festival was founded in 2000 under the name of Science plus Fiction by the Research and Experimentation Centre La Cappella Underground with the ambitious purpose of re-launching the Festival Internazionale del film di fantascienza, which had been held in the northern Italian city of Trieste in the years 1963–1982.

Pedro Alcalde is a Spanish composer, conductor, musicologist and pianist.

Sol Picó Monllor is a Spanish dancer and choreographer. She has studied Spanish dance, ballet, and contemporary dance, and combines different techniques and languages in her productions in a groundbreaking way. In 1993 she created the Sol Picó Company, with which she has become one of the most heterodox choreographers and dancers of the Spanish contemporary scene. She has received numerous awards, including 10 Premios Max, the National Dance Award of Catalonia (2004), the City of Barcelona Dance Award (2015) and the National Dance Award of Spain (2016).

Víctor Meliveo is a Spanish photographer and video artist. After an accident he lost most of his vision. Throughout his professional career he has won several awards highlighting the Malaga Film Festival Prize (2006).

The Living Forest is a 2001 Spanish 3D computer-animated fantasy film directed by Ángel de la Cruz and Manolo Gómez, based on the novel of the same name by popular Spanish writer Wenceslao Fernández Flórez, with a script by Gómez. The film was released in Spain on 3 August 2001 by Buena Vista International. It won Best Animated Film at the 16th Goya Awards in 2001 and the White Camel award at the Sahara International Film Festival in 2003.

Aïda Ballmann is a Spanish actress, director and producer from the Canary Islands. She was born on the island El Hierro, of German descent ; she speaks fluent German, Spanish, and English.

María Molins is a Spanish film, theater and television actress. She has obtained two nominations at the Gaudí Awards and winning the award for best leading actress in 2013 for her participation in the film El Bosque.