Fayyaz Hashmi (Urdu : فیاض ہاشمی‎) was a Pakistani poet and screenwriter who worked both in the Indian and Pakistani film industry. He penned some memorable songs such as the famous ghazal Aaj Jaane Ki Zid Na Karo [2] and Tasveer teri dil mera behela nah sake gi. The latter made the singer Talat Mahmood famous in India back in 1941 [3] and was instrumental in introducing him to the Calcutta film industry. A little known fact about him is that he wrote the famous 'Na tum mere na dil mera', that was sung by Kamla Jharia, among many others. One of the couplets from this ghazal became popular that reads 'aye bas naadaniyon par apni naaz karte hain abhi dekhi kahan hain aapne naadaniyan meri'

He was born in Calcutta in 1920. His father, Muhammad Hussain Hashmi, was also a poet with pen name 'Dilgeer' as well as a writer of stage drama. [4] Fayyaz Hashmi was employed as the resident lyricist by the British-owned Gramophone Company of India from 1943 to 1948. [4] "Fayyaz Hashmi wrote his first verse, 'Chaman mein ghuncha-o-gul ka tabassum dekhne walo - Kabhi tum ne haseen kalyon ka murjhana bhi dekha hai', when he was in 7th class." [4] He wrote his very first full songs that Talat Mahmood sang in 1941 (Sab din ek samaan nahin tha) and the runaway hit Tasveer teri dil mera behla na sakay gi with music composed by Kamal Das Gupta. [4]

In 1951, he was transferred by his employer, Gramophone Company of India, to Lahore to organise the music scene in Pakistan. There he promoted many talented artists including Farida Khanum, Saeen Marna, Saeen Akhtar and Saeen Budha. [4]

He turned to writing of film songs in 1956. Kunwari Bewa was the first Pakistani film with his songs. He wrote more than 2000 songs for films and the Gramophone Recording Company in his lifetime. He also wrote the stories, dialogues and scripts of many hit films, and received numerous awards during his career. [1]

Fayyaz Hashmi worked as a film song lyricist for the following movies:

He also worked as a writer and director in the following movies:

Mehdi Hasan Khan, NI, (18 July 1927 – 13 June 2012) was a Pakistani ghazal singer and playback singer for Lollywood. One of the greatest and most influential figures in the history of ghazal singing, he is famously known as the "King of Ghazal" or the "Shahanshah-e-Ghazal". Known for his "haunting" baritone voice, Mehdi Hassan is credited with bringing ghazal singing to a worldwide audience. He is unique for his melodic patterns and maintaining integrity of the ragas in an innovative way. He was aware of his responsibility in keeping the raga based ghazal genre alive in modern times. Born to a musical family, he influenced generations of singers from diverse genres, from Jagjit Singh to Sonu Nigam. He earned numerous awards and accolades in his career and remained a leading singer of Pakistani film industry along with another contemporary playback singer Ahmed Rushdi, and it's estimated that "he sang and created soundtracks for almost 300 movies." 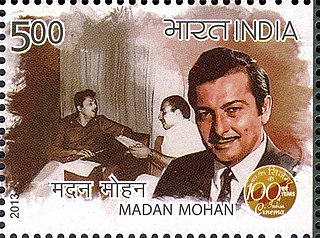 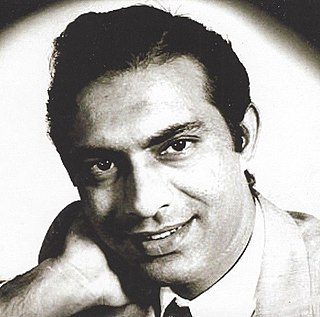 Talat Mahmood was an Indian playback singer who is considered as one of the greatest male Indian non-classical and semi-classical singers. Although he tried his luck as a film actor, he did not succeed a great deal in acting.

Sajjad Ali is a Pakistani semi-classical, pop and rock singer, poet, actor, film director as well as a film producer from Karachi, Pakistan.

Shailendra was a popular Indian Hindi lyricist. Noted for his association with the filmmaker Raj Kapoor and the composers Shankar-Jaikishan, he wrote lyrics for several successful Hindi film songs in the 1950s and the 1960s.

Khumār Barabankvi Urdu: خُمار بارہ بنکوی‎ (20 September 1919 – 19 February 1999) was an Urdu poet and lyricist from Barabanki, Uttar Pradesh, India. His real name was Mohammed Haidar Khan, The word comes from the Arabic root 'Khum' which means a jar of wine. His ghazal are sung by many famous singers such as Mehdi Hassan, Ghulam Ali, K. L. Saigal, Mohd Rafi, Lata Mangeshkar, Hussain Brother, Nizami Brother,and Jagjit Singh many other famous singer. Even Lata Mangeshkar recorded her first song was written by him. He was also known as Shahenshah e ghazal and Abru e ghazal.

Masood Rana (Urdu: مسعُود رانا ‎), was a Pakistani playback singer. He began his singing career in 1962 with the film Inqalab and became one of the top male singers in both Urdu and Punjabi films for more than three decades. He sang in the highest number of films and was a very busy film singer until his death in 1995.

Himayat Ali Shair was an Urdu poet, writer, film songwriter, actor and radio drama artist from Pakistan. He received the 2002 Pride of Performance Award for his literary services in Urdu literature from the president of Pakistan. He also received 2 Nigar Awards in 1962 and 1963 for 'Best Song Lyricist' for the Pakistani films "Aanchal" (1962) and "Daman" (1963).

Saleem Raza, was a Pakistani playback singer. He started his singing career from Lahore, Pakistan and quickly gained popularity. Saleem Raza was a classically- trained singer and was more famous for singing sad songs. Saleem Raza's career suffered due to the rise of singer Ahmed Rushdi in the late 1950s. He left playback singing in 1966 as he lost his popularity with the film composers and shifted to Canada where he died in 1983.

Bashir Ahmed was a Bangladeshi playback singer who started his career from Pakistan film industry. Born in Kolkata, West Bengal, he migrated to Dhaka, East Bengal after the Partition period in 1960 and started his singing career. He is known as East Pakistan's Ahmed Rushdi because his singing style is inspired by Ahmed Rushdi. He was awarded Ekushey Padak in 2005 by the Government of Bangladesh and Bangladesh National Film Award for Best Male Playback Singer for his performance in the film Kokhono Megh Kokhono Bristi (2003).

Sheikh Mohammed Irfan alias Shaukat Pardesi was a poet, journalist and lyricist born in Malaysia, where his father Sheikh Sahib Ali had migrated from Maroofpur village in Jaunpur district of India. During 1950's Pardesi was associated with Urdu Daily Inquilab for some-time and also acted as the editor of Film Times Weekly magazine. He published and edited an acclaimed monthly Urdu magazine titled Munna for children. The writings of eminent writers like Niaz Fatehpuri, Ale Ahmad Suroor, Faiz Ahmed Faiz, etc. had supported Munna magazine during that time. His ghazals and nazms were published in almost all known Urdu journals and were recorded by HMV in the melodious voices of various famous singers of his time viz. Talat Mahmood, Manna Dey, C. H. Atma, Anup Jalota, Dilraj Kaur, Shailendra Singh, Shyam Lala, Mukesh and others.