Feldspars crystallize from magma as both intrusive and extrusive igneous rocks and are also present in many types of metamorphic rock. [4] Rock formed almost entirely of calcic plagioclase feldspar is known as anorthosite. [5] Feldspars are also found in many types of sedimentary rocks. [6]

This group of minerals consists of tectosilicates, silicate minerals in which silicon ions are linked by shared oxygen ions to form a three-dimensional network. Compositions of major elements in common feldspars can be expressed in terms of three endmembers:

Alkali feldspars are grouped into two types: those containing potassium in combination with sodium, aluminum, or silicon; and those where potassium is replaced by barium. The first of these include:

In addition, peristerite is the name given to feldspar containing approximately equal amounts of intergrown alkali feldspar and plagioclase. [13]

The barium feldspars are monoclinic and include the following:

Intermediate compositions of plagioclase feldspar also may exsolve to two feldspars of contrasting composition during cooling, but diffusion is much slower than in alkali feldspar, and the resulting two-feldspar intergrowths typically are too fine-grained to be visible with optical microscopes. The immiscibility gaps in the plagioclase solid solutions are complex compared to the gap in the alkali feldspars. The play of colors visible in some feldspar of labradorite composition is due to very fine-grained exsolution lamellae known as Bøggild intergrowth. The specific gravity in the plagioclase series increases from albite (2.62) to anorthite (2.72–2.75).

The name feldspar derives from the German Feldspat, a compound of the words Feld ("field") and Spat ("flake"). Spat had long been used as the word for "a rock easily cleaved into flakes"; Feldspat was introduced in the 18th century as a more specific term, referring perhaps to its common occurrence in rocks found in fields (Urban Brückmann, 1783) or to its occurrence as "fields" within granite and other minerals (René-Just Haüy, 1804). [16] The change from Spat to -spar was influenced by the English word spar, [17] meaning a non-opaque mineral with good cleavage. [18] Feldspathic refers to materials that contain feldspar. The alternate spelling, felspar, has fallen out of use. The term 'felsic', meaning light colored minerals such as quartz and feldspars, is an acronymic word derived from feldspar and silica, unrelated to the redundant spelling 'felspar'.

Chemical weathering of feldspars results in the formation of clay minerals [19] such as illite and kaolinite.

Feldspar is a common raw material used in glassmaking, ceramics, and to some extent as a filler and extender in paint, plastics, and rubber. In glassmaking, alumina from feldspar improves product hardness, durability, and resistance to chemical corrosion. In ceramics, the alkalis in feldspar (calcium oxide, potassium oxide, and sodium oxide) act as a flux, lowering the melting temperature of a mixture. Fluxes melt at an early stage in the firing process, forming a glassy matrix that bonds the other components of the system together. In the US, about 66% of feldspar is consumed in glassmaking, including glass containers and glass fiber. Ceramics (including electrical insulators, sanitaryware, pottery, tableware, and tile) and other uses, such as fillers, accounted for the remainder. [21]

Bon Ami, which had a mine near Little Switzerland, North Carolina, used feldspar as an abrasive in its cleaners. The Little Switzerland Business Association says the McKinney Mine was the largest feldspar mine in the world, and North Carolina was the largest producer. Feldspar had been discarded in the process of mining mica until William Dibbell sent a premium quality product to the Ohio company Golding and Sons around 1910. [22]

In October 2012, the Mars Curiosity rover analyzed a rock that turned out to have a high feldspar content. [23] 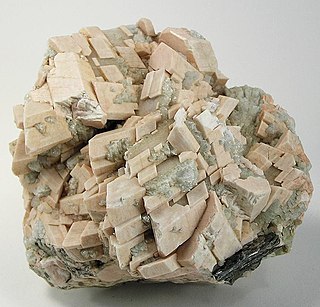 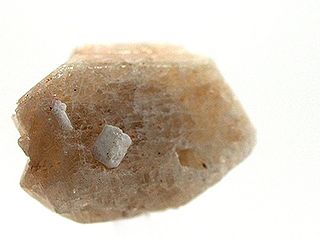 The mineral anorthoclase ((Na,K)AlSi3O8) is a crystalline solid solution in the alkali feldspar series, in which the sodium-aluminium silicate member exists in larger proportion. It typically consists of between 10 and 36 percent of KAlSi3O8 and between 64 and 90 percent of NaAlSi3O8. 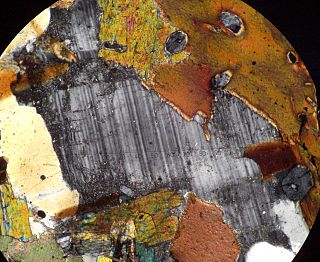 Plagioclase is a series of tectosilicate (framework silicate) minerals within the feldspar group. Rather than referring to a particular mineral with a specific chemical composition, plagioclase is a continuous solid solution series, more properly known as the plagioclase feldspar series (from the Ancient Greek for "oblique fracture", in reference to its two cleavage angles). This was first shown by the German mineralogist Johann Friedrich Christian Hessel (1796–1872) in 1826. The series ranges from albite to anorthite endmembers (with respective compositions NaAlSi3O8 to CaAl2Si2O8), where sodium and calcium atoms can substitute for each other in the mineral's crystal lattice structure. Plagioclase in hand samples is often identified by its polysynthetic crystal twinning or 'record-groove' effect. 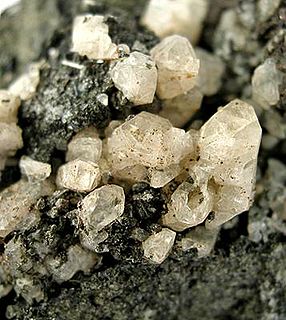 Anorthite is the calcium endmember of the plagioclase feldspar mineral series. The chemical formula of pure anorthite is CaAl2Si2O8. Anorthite is found in mafic igneous rocks. Anorthite is rare on the Earth but abundant on the Moon. 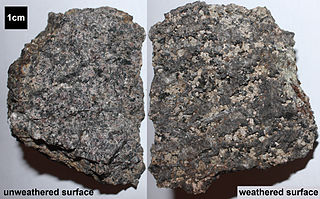 Potassium feldspar refers to a number of minerals in the feldspar group, and containing potassium: 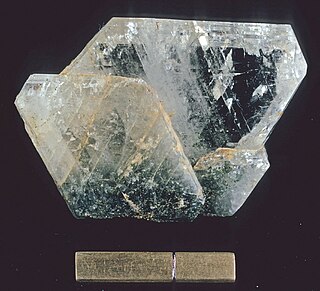 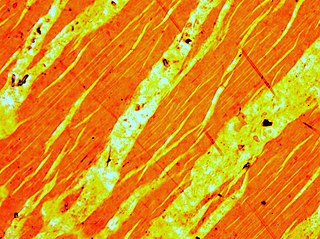 Perthite is used to describe an intergrowth of two feldspars: a host grain of potassium-rich alkali feldspar (near K-feldspar, KAlSi3O8, in composition) includes exsolved lamellae or irregular intergrowths of sodic alkali feldspar (near albite, NaAlSi3O8, in composition). Typically the host grain is orthoclase or microcline, and the lamellae are albite. If sodic feldspar is the dominant phase, the result is an antiperthite and where the feldspars are in roughly equal proportions the result is a mesoperthite. 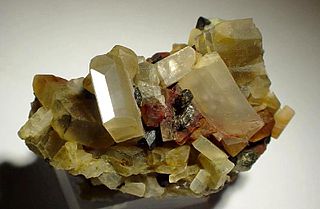 Oligoclase is a rock-forming mineral belonging to the plagioclase feldspars. In chemical composition and in its crystallographic and physical characters it is intermediate between albite (NaAlSi3O8) and anorthite (CaAl2Si2O8). The albite:anorthite molar ratio ranges from 90:10 to 70:30. 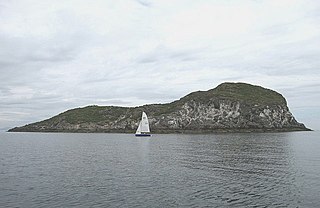 Celsian is an uncommon feldspar mineral, barium aluminosilicate, BaAl2Si2O8. The mineral occurs in contact metamorphic rocks with significant barium content. Its crystal system is monoclinic, and it is white, yellow, or transparent in appearance. In pure form, it is transparent. Synthetic barium aluminosilicate is used as a ceramic in dental fillings and other applications. 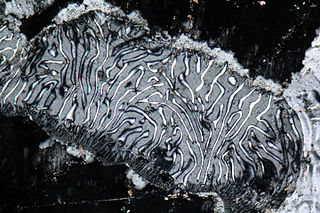 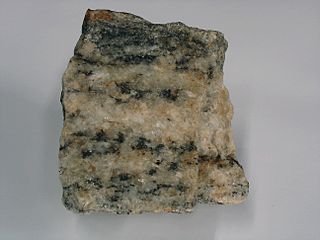 An endmember in mineralogy is a mineral that is at the extreme end of a mineral series in terms of purity. Minerals often can be described as solid solutions with varying compositions of some chemical elements, rather than as substances with an exact chemical formula. There may be two or more endmembers in a group or series of minerals.

In subsolvus or two feldspar granites crystallisation occurs at high water pressures resulting in the formation of two types of feldspar as opposed to hypersolvus granites in which crystallization at relatively low water pressures results in the formation of a single feldspar variety. Quoting Tuttle and Bowen in 1958 : ″A classification of salic rocks based on the nature of the alkali feldspar is proposed. The classification has two major divisions: (1) subsolvus, and (2) hypersolvus, depending on the whereabouts of the soda feldspar. In the hypersolvus rocks all the soda feldspar is or was in solid solution in the potash feldspar whereas in the subsolvus rocks the plagioclase is present as discrete grains. The two major divisions are further subdivided according to the nature of the alkali feldspar modification.″ Note that here the word "subsolidus" unfortunately looks like a misprint and probably has to be replaced by "subsolvus". 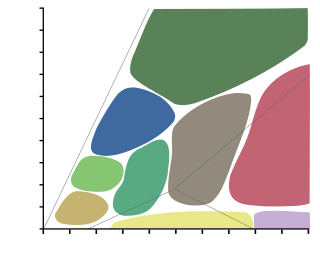 Rubicline, also referred to as Rb-microcline, is the rubidium analogue of microcline, an important tectosilicate mineral. Its chemical formula is (Rb, K)[AlSi3O8] with an ideal composition of RbAlSi3O8. Chemical analysis by electron microprobe indicated the average weight of the crystal is 56.66% SiO2, 16.95% Al2O3, and 23.77% Rb2O, along with trace amounts of caesium oxide (Cs2O) and iron(III) oxide (Fe2O3).