Luschan was born the son of a lawyer in Hollabrunn, Lower Austria, and attended the Akademisches Gymnasium in Vienna. After leaving school he studied medicine at the University of Vienna and anthropology in Paris, with an emphasis on craniometry. After he gained his doctorate in 1878, he was an army doctor in Austro-Hungarian occupied Bosnia and, together with the British archaeologist Arthur Evans, travelled through Dalmatia, Montenegro and Albania. From 1880 he worked as a medical assistant at the Vienna General Hospital and a lecturer ( Privatdozent ) at the University of Vienna in 1882. In 1885 he married Emma von Hochstetter, daughter of the German geologist Ferdinand von Hochstetter, a close friend of his father.

On 1 January 1886 Luschan took up a position as an assistant to Director Adolf Bastian at the Königliches Museum für Völkerkunde in Berlin (the present-day Ethnological Museum), where upon Bastian's death in 1905 he became Director of the Africa and Oceania Department. In this capacity he acquired one of the most important collections of Benin antiquities, ivory carvings, and bronze figures, details of which he published in his multivolume magnum opus. He also lead a huge collection campaign of the bones and skulls of thousands of people from across European empires. In 1906, this included human remains from the Herero-Nama Genocide. [2]

He started his academic career in 1888, in 1904 was appointed Reader, and in 1909 gave up his duties at the Völkerkundemuseum when he was appointed tenured professor at the Berlin Charité medical school. In 1911 he became the holder of the first chair of anthropology at Berlin's Frederick William University (now the Humboldt University of Berlin). He is also remembered for creating the von Luschan's chromatic scale for classifying skin colour, which consisted of 36 opaque glass tiles which were compared to the subject's skin.

Though Luschan had joined the German Society for Racial Hygiene in 1908, in his works he rejected the rising ideas of "scientific racism" and stressed the equality of the human races. He died in Berlin at the age of 69 and is buried at his summer residence in Millstatt, Austria.

The German Society for Racial Hygiene goal was "for society to return to a healthy and blooming, strong and beautiful life" as Ploetz put it. The Nordic race was supposed to regain its "purity" through selective reproduction and sterilization.

In 1915 he was appointed to the "Königlich Preußische Phonographische Kommission" (Royal Prussian Phonographic Commission) for his anthropological expertise. The purpose of the commission was to record the approximately 250 languages spoken by the prisoners of German WWI PoW camps. In the course of this endeavor, von Luschan also conducted physical anthropology research on the internees. [4]

In 1881 Luschan and Otto Benndorf explored the ancient Lycian region of southern Anatolia, part of the Ottoman Empire, where they excavated the Heroon of Trysa near Myra, which is now on display at the Vienna Kunsthistorisches Museum. The next year he joined Karol Lanckoroński and Alfred Biliotti on an expedition to Pamphylia and Rhodes.

In February 1883 he accompanied Carl Humann on an expedition to Mount Nemrut in historic Commagene which was initiated by the Prussian Academy of Sciences. At Zincirli he discovered the ruins of Sam'al, capital of a small principality of the late Hittite period, which he later excavated between 1888 and 1902 together with Robert Koldewey. Descriptions of the plants he collected in the Ottoman Empire were later published by Otto Stapf.

All his expeditions profited from Luschan's medical training. In 1905 he and his wife Emma travelled to South Africa at the invitation of the British Science Association, and in 1913 they went to Australia, where the couple heard the news of the outbreak of the First World War in Europe and had to proceed to the neutral United States. 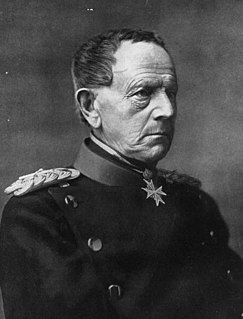 Helmuth Karl Bernhard Graf von Moltke was a Prussian field marshal. The chief of staff of the Prussian Army for thirty years, he is regarded as the creator of a new, more modern method of directing armies in the field. He commanded troops in Europe and the Middle East, commanding during the Second Schleswig War, Austro-Prussian War and the Franco-Prussian War. He is described as embodying "Prussian military organization and tactical genius." He was fascinated with railways and pioneered their military usage. He is often referred to as Moltke the Elder to distinguish him from his nephew Helmuth Johann Ludwig von Moltke, who commanded the German Army at the outbreak of World War I.

Graf Helmuth Johannes Ludwig von Moltke, also known as Moltke the Younger, was a German general and Chief of the Great German General Staff. He was also the nephew of GeneralfeldmarschallGraf Helmuth Karl Bernhard von Moltke, who is commonly called "Moltke the Elder" to differentiate the two. 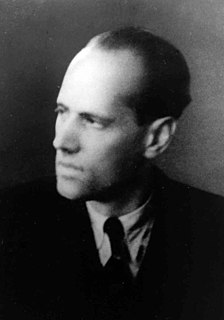 Helmuth James Graf von Moltke was a German jurist who, as a draftee in the German Abwehr, acted to subvert German human-rights abuses of people in territories occupied by Germany during World War II. He was a founding member of the Kreisau Circle opposition group, whose members opposed the government of Adolf Hitler in Nazi Germany, and discussed prospects for a Germany based on moral and democratic principles after Hitler. The Nazis executed him for treason for his participation in these discussions. 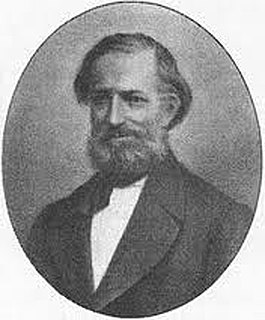 Heinrich Karl Wilhelm Berghaus was a German geographer and cartographer who conducted trigonometric surveys in Prussia and taught geodesy at the Bauakademie in Berlin. He taught cartography and produced a pioneering and influential thematic atlas which provided maps of flora, fauna, climate, geology, diseases, and a range of other information. He was a friend of Alexander von Humboldt and produced some of the maps used in his publications. A nephew Hermann Berghaus also worked in cartography. 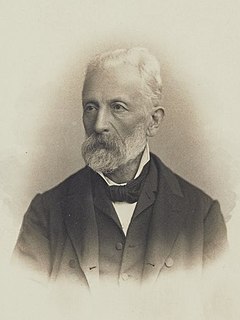 Adolf Philipp Wilhelm Bastian was a 19th-century polymath best remembered for his contributions to the development of ethnography and the development of anthropology as a discipline. Modern psychology owes him a great debt, because of his theory of the Elementargedanke, which led to Carl Jung's development of the theory of archetypes. His ideas had a formative influence on the "father of American anthropology" Franz Boas, and he also influenced the thought of comparative mythologist Joseph Campbell.

Karl Ludwig Freiherr von Pöllnitz was a German adventurer and writer from Issum. 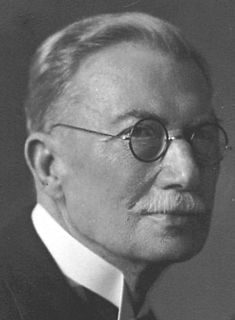 Otto Dempwolff was a German physician, linguist and anthropologist who specialized in the study of the Austronesian language family. Baron Eligius Franz Joseph von Münch-Bellinghausen was an Austrian dramatist, poet and novella writer of the Austrian Biedermeier period and beyond, and is more generally known under his pseudonym Friedrich Halm.

Louis Nathaniel, Baron de Rothschild was an Austrian baron from the famous Rothschild family. He was born in Vienna on 5 March 1882 and died of heart failure while swimming in Montego Bay, Jamaica on 15 January 1955.

Ludwig Darmstaedter was a German chemist and historian of science.

The Ethnological Museum of Berlin is one of the Berlin State Museums, the de facto national collection of the Federal Republic of Germany. It is presently located in the museum complex in Dahlem, along with the Museum of Asian Art and the Museum of European Cultures. The museum holds more than 500,000 objects and is one of the largest and most important collections of works of art and culture from outside Europe in the world. Its highlights include important objects from the Sepik River, Hawaii, the Kingdom of Benin, Cameroon, Congo, Tanzania, China, the Pacific Coast of North America, Mesoamerica, the Andes, as well as one of the first ethnomusicology collections of sound recordings.

Michael Graf von Matuschka was a German politician who took part in the 20 July plot.

Heinrich Lüders was a German Orientalist and Indologist known for his epigraphical analysis of the Sanskrit Turfan fragmentary manuscripts.

The Halbmondlager was a prisoner-of-war camp in Wünsdorf, Germany, during the First World War.

Karl Weule was a German geographer, ethnologist and museum director.

Paul Hambruch was a German ethnologist and folklorist. 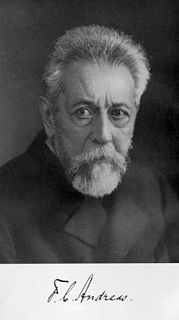 Friedrich Carl Andreas was an orientalist of German, Malay and Armenian parentage (descendant of the Bagratuni or Bagratid royal family. He was the husband of psychoanalyst Lou Andreas-Salomé.