Fenwick Island is named for Thomas Fenwick a planter who migrated to the Thirteen Colonies from York, England. He was granted rights to the land by Lord Baltimore, the second Proprietary Governor of the Province of Maryland, in 1682. Fenwick never actually lived on Fenwick Island, but he did rise to a position of importance in Sussex County government. He served as a Justice of the Peace, Sheriff and register of wills until his death in 1708. Some legends contend that Fenwick swam ashore at Fenwick Island after being thrown overboard by pirates. Most historians do not believe that this happened. It is, however, likely that Fenwick's future son-in-law did swim ashore. William Fassett swam ashore after being cast off by a group of pirates. He would go on to marry Fenwick's daughter, Mary and claim the land of Fenwick Island for himself. [1]

While the governors of Delaware and Maryland were arguing over the correct boundaries, pirates used the harbors of Little Assawoman Bay to the west of Fenwick Island State Park as a safe haven. For 100 years the pirates raided the ships of local and passing sea capitans, using Cedar Island in the bay as their base of operations. [1]

Fenwick Island has remained largely undeveloped because it is a narrow peninsula that is just 3 miles (4.8 km) wide. The constantly shifting dunes have made commercial and residential development difficult. The town of Fenwick Island is located just above the Delaware/Maryland border. [2] Despite several descriptions of Fenwick Island as a barrier island, it is clear from maps that it is not a true island. The border between Maryland and Delaware below Fenwick Island is a land boundary. Ocean City, Maryland occupies the southern tip of the peninsula on which Fenwick Island is situated.

Ownership of the land was designated to the state of Delaware in 1926. It was used as part of the coastal defense system during the World War II years. An observation tower from this era still stands at the northern end of the park. [2] Management of the property was transferred from the Delaware Highway Department to the State Park Commission in 1966. Fenwick Island State Park was originally the southern portion of Delaware Seashore State Park. The parks were divided in 1981. Fenwick Island State Park is managed in conjunction with Holts Landing State Park on Indian River Bay to the north. [2]

Fenwick Island State Park borders the Atlantic Ocean and Little Assawoman Bay. This allows visitors to the park to experience two different coastlines on one patch of land. The beach at the ocean is open to swimming, surfing and surf fishing. It is monitored by lifeguards from 9:00 am until 5:00 pm, Memorial Day weekend through Labor Day weekend. A modern bathhouse is equipped with showers, changing rooms, a gift shop and food concession. Visitors to the park, interested in surf fishing, are permitted to drive vehicles onto the beach provided they purchase a permit at the gift shop or from the offices at Delaware Seashore State Park. [2]

The bay side of the park is open to fishing, recreational crabbing, clamming, sailing and windsurfing and kayaking. [3] Visitors to the park may rent various types of watercraft and receive sailing lessons from an outfitter across bay at the Assawoman Wildlife Area. [3]

The following state parks are within 30 miles (48 km) of Fenwick Island State Park:

Sussex County is located in the southern part of the U.S. state of Delaware, on the Delmarva Peninsula. As of the 2010 census, the population was 197,145. The county seat is Georgetown.

Bethany Beach is an incorporated town in Sussex County, Delaware, United States. According to the 2010 Census Bureau figures, the population of the town is 1,060; however, during the summer months some 15,000 more populate the town as vacationers. It is part of the Salisbury, MD-DE Metropolitan Statistical Area.

Fenwick Island is a coastal resort town in Sussex County, Delaware, United States. According to 2010 census figures, the population of the town is 379, a 10.8% increase over the last decade. It is part of the Salisbury, Maryland-Delaware Metropolitan Statistical Area. The town is located on Fenwick Island, a barrier spit.

South Bethany is an incorporated town in Sussex County, Delaware, United States. According to the 2010 census, the population of the town is 449, a decrease of 8.7% over the previous decade. It is part of the Salisbury, Maryland-Delaware Metropolitan Statistical Area. 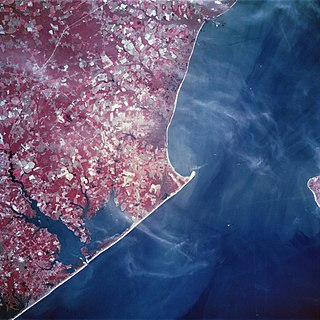 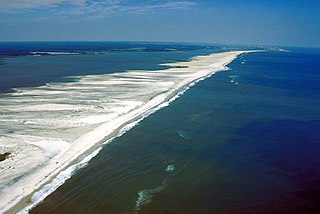 Assateague Island is a 37-mile (60 km) long barrier island located off the eastern coast of the Delmarva Peninsula facing the Atlantic Ocean. The northern two-thirds of the island is in Maryland while the southern third is in Virginia. The Maryland section contains the majority of Assateague Island National Seashore and Assateague State Park. The Virginia section contains Chincoteague National Wildlife Refuge and a one-mile stretch of land containing the lifeguarded recreational beach and interpretive facilities managed by the National Park Service. It is best known for its herds of feral horses, pristine beaches and the Assateague Lighthouse. The island also contains numerous marshes, bays, and coves, including Toms Cove. Bridge access for cars is possible from both Maryland and Virginia, though no road runs the full north/south length of the island.

Indian River Bay is a body of water in Sussex County, Delaware. It is part of Delaware's inland bay system, along with Little Assawoman Bay and Rehoboth Bay. Fed by the Indian River at its western end, the bay is connected to the Atlantic Ocean to the east via the Indian River Inlet. A natural waterway that shifted up and down a two-mile (3.2 km) stretch of the coast until 1928, the inlet was kept in its current location by dredging between 1928 and 1937, and in 1938 was fixed in place by the construction of jetties. The Charles W. Cullen Bridge, commonly known as the Indian River Inlet Bridge, spans the inlet.

Maryland Route 54 (MD 54) and Delaware Route 54 (DE 54) are adjoining state highways in the U.S. states of Maryland and Delaware. Route 54 runs 41.84 mi (67.33 km) from MD 313 in Mardela Springs, Maryland east to DE 1 in Fenwick Island, Delaware. In addition to two segments in which the highway is completely in Delaware and two segments in which the highway is completely in Maryland, Route 54 follows the Delaware/Maryland state line between the twin towns of Delmar, Maryland and Delmar, Delaware and the highway's intersection with MD 353 and DE 26. One section of the state line portion of Route 54 is maintained by the Delaware Department of Transportation (DelDOT) while three sections of the highway that follow the state line are maintained by the Maryland State Highway Administration (MDSHA).

Delaware Bicycle Route 1 is a bicycle route that runs the north-south length of the U.S. state of Delaware, from the Maryland border in Fenwick Island, Sussex County north to the Pennsylvania border near Montchanin, New Castle County. The route passes through many Delaware scenes, including beaches, farmland, state parks, and towns. The route is the first of many signed bike routes planned in the state.

The Coastal Heritage Greenway is a greenway in the U.S. state of Delaware linking many sites along the Delaware Bay and the Atlantic Ocean between Fox Point State Park in Edgemoor, New Castle County and the beach town of Fenwick Island in Sussex County. The greenway follows Delaware Route 9 from the Wilmington area to just south of Dover and Delaware Route 1 from Dover to Fenwick Island. 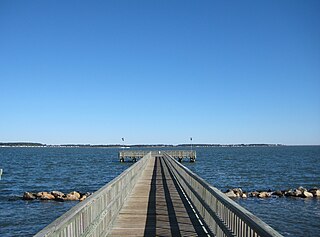 Fenwick Island is a barrier island along the Atlantic Ocean in Delaware and Maryland in the United States. It contains the communities of South Bethany and Fenwick Island in Delaware along with Ocean City, Maryland. Until 1933, it was attached to Assateague Island to the south. That year, a hurricane carved an inlet between the two landforms, which was made permanent. If not for the Assawoman Canal, constructed by the U.S. Army Corps of Engineers in 1891, the island would be attached to the mainland of Delaware. 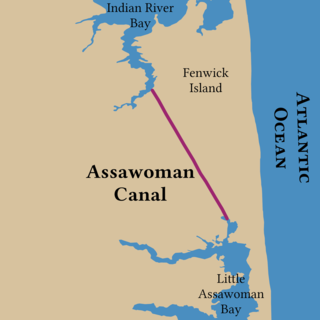 The Assawoman Canal is a canal in Sussex County, Delaware. The canal links the Indian River Bay to the north with the Little Assawoman Bay to the south. It is bordered by Bethany Beach and South Bethany to the east and Ocean View to the west. Because of it, Fenwick Island is detached from the Delaware mainland.

Wikimedia Commons has media related to Fenwick Island State Park .
This page is based on this Wikipedia article
Text is available under the CC BY-SA 4.0 license; additional terms may apply.
Images, videos and audio are available under their respective licenses.