Joachim Ferdinand Richardt (10 April 1819 - 29 October 1895) was a Danish-American artist. In Denmark he is known for his lithographs of manor houses, and in the U.S. for his paintings of Niagara Falls and other landscapes. [1] [2]

Ferdinand Richardt, the son of Johan Joachim Richardt and Johanne Frederikke née Bohse, was born in Brede, north of Copenhagen in 1819. His father ran the inn/company store at the Brede factory. In 1832 the family relocated to nearby Ørholm to operate the inn at the paper-factory there. In 1839, they moved to Copenhagen. [1]

Richardt became briefly a carpenter's apprentice in 1835, but soon decided on a career in fine art, following the lead of his brother Carl. Beginning in 1836 Richardt studied at the Royal Danish Academy of Art under the architect and designer Gustav Friedrich Hetsch, the historical painter J. L. Lund and the classical sculptor Bertel Thorvaldsen. Richardt was awarded the Academy's small and large silver medals in 1839 and 1840, respectively. [1]

In 1847, he received a five-year stipend from the crown, on the condition that he deliver one architectural and one landscape painting each year to the royal collection. Between 1855 and 1859 he visited in the United States. He maintained a studio in New York City, while traveling during the summers to Niagara Falls and to various destinations east of the Mississippi River. [3]

After returning to Denmark, Richardt married the widow Sophia Schneider née Linnemann (1831-1888) in 1862. They traveled for part of a year in southern Europe, and from 1863 they lived for a period in England. In February 1864, Queen Victoria invited Richardt to display his art work to the court at Windsor Castle.

In 1872 and 1873, Richardt sold many of his accumulated paintings and lithographs before emigrating to the United States with his family. They lived first in the town of Niagara Falls, N.Y. where the artist again produced canvases depicting the great waterfall and the surrounding area. In 1875, the Richardts moved to San Francisco, and finally in 1876 to Oakland. For the remaining twenty years of his life Richardt was active as a painter of California landscapes with a concentration on the San Francisco Bay Area. He exhibited and sold his works in San Francisco until at least 1887. At the same time he taught drawing privately. [3]

During the 1840s, 50s and 60s, Richardt travelled in Denmark and Sweden, and made numerous drawings of manor houses and estates. These were lithographed with the best techniques of the time, and published along with descriptions by well-known historians in the books:

Richardt drew a vast number of pictures besides those published. These served as studies for his hundreds of oil paintings and for other print works. At his death, more than 1,000 Danish and American drawings passed to his daughter, and later to his stepson. The drawings were considered to be lost, until the 1990s when American scholar and cultural historian Melinda Young Stuart located them in the possession of Justine van Hemert Keller, the grandchild of Richardt's stepson. Over 500 of the original drawings, on which Richardt's paintings and lithographs were based, are preserved in the archives of Denmark's Nationalmuseet, a gift of the artist's great-granddaughter. Other drawings are held at the Oakland Museum of California, the M. H. de Young Memorial Museum, and elsewhere.

In 2003, more than 100 of the newly found drawings were reproduced, along with other works by Richardt in the book Danish Manorhouses and America (see below). A copy of this book was presented as a gift by the Danish prime minister's wife to the American First Lady when she came to Copenhagen on an official visit.

In 2007, 55 of Richardt's American drawings were exhibited at the Munson-Williams-Proctor Arts Institute; a catalogue was published (see below). The exhibit later traveled to the Grand Rapids Art Museum where it was on view during the summer of 2008. Bertel Thorvaldsen was a Danish sculptor and medalist of international fame, who spent most of his life (1797–1838) in Italy. Thorvaldsen was born in Copenhagen into a working-class Danish/Icelandic family, and was accepted to the Royal Danish Academy of Art at the age of eleven. Working part-time with his father, who was a wood carver, Thorvaldsen won many honors and medals at the academy. He was awarded a stipend to travel to Rome and continue his education.

Henry Heerup was a painter, graphic artist and sculptor. Heerup was an extremely versatile artist. His works of art included paintings, lithographs, stone sculptures, linoleum cuts and drawings as well as objects which he composed from scrap. 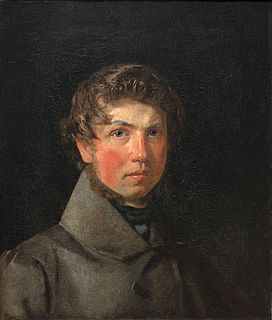 Christoffer Wilhelm Eckersberg was a Danish painter. He was born in Blåkrog in the southern part of Jutland in Denmark. He went on to lay the foundation for the period of art known as the Golden Age of Danish Painting, and is referred to as the "Father of Danish painting".

Frederiksborg Castle is a palatial complex in Hillerød, Denmark. It was built as a royal residence for King Christian IV of Denmark-Norway in the early 17th century, replacing an older castle acquired by Frederick II and becoming the largest Renaissance residence in Scandinavia. On three islets in the Slotssøen, it is adjoined by a large formal garden in the Baroque style.

Johan Ludwig Gebhard Lund was a Danish painter, born in Kiel, Duchy of Holstein, to master painter Hans Giewert Lund and his wife Maria Magdalena Christina Bremer. An adherent of romanticism, he is known for his history paintings. 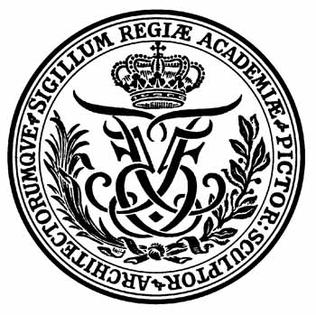 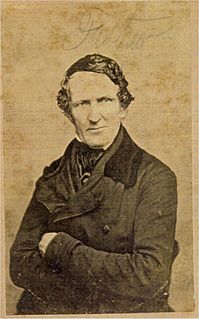 Alvan Fisher was one of the United States's pioneers in landscape painting and genre works. 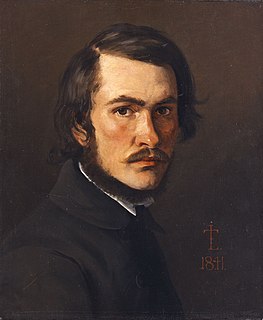 Johan Thomas Lundbye was a Danish painter and graphic artist, known for his animal and landscape paintings. He was inspired by Niels Laurits Høyen's call to develop nationalistic art through depictions of Denmark's characteristic landscapes; the historical buildings and monuments, and the country's simple, rural people. He became one of his generation's national romantic painters, along with P. C. Skovgaard and Lorenz Frølich, to regularly depict the landscape of Zealand. 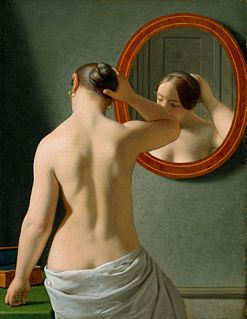 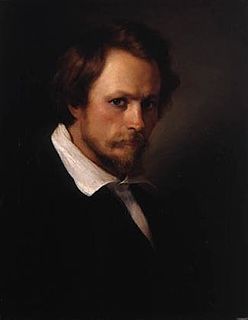 Emil Jens Baumann Adolf Jerichau was a Danish sculptor. He belonged to the generation immediately after Bertel Thorvaldsen, for whom he worked briefly in Rome, but gradually moved away from the static Neoclassicism he inherited from him and towards a more dynamic and realistic style. He was a professor at the Royal Danish Academy of Fine Arts and its director from 1857 to 1863. 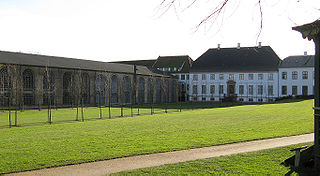 Brede is a suburb 14 km north of Copenhagen, Denmark; it is not a part of Virum in the Lyngby-Taarbæk Kommune, and approximately 3.500 live there. Frilandsmuseet, and The National Museum of Denmark's new museum, Brede Works, is located in Brede. Nærumbanen stops in Brede. 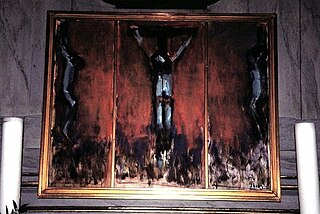 Sven Havsteen-Mikkelsen was a Danish painter who is remembered for his old Nordic landscapes, his church decorations and his woodcuts.

Frederik Christian Lund, commonly known as F. C. Lund, was a Danish genre and history painter. He is also remembered for his illustrations of traditional Danish regional costumes in the mid 19th century.

Robert Kipniss is an American painter and printmaker. His mature paintings, lithographs, mezzotints, and drypoints share stylistic characteristics and subject matter and typically depict trees seen close up or at varying distances in fields. Other works show one or more houses in a landscape or town setting. Some are interiors with a view toward a window or with a still life set close to one, frequently with a landscape beyond. No human figures are present, and all forms are reduced to essentials. The time is often dusk or nighttime. Kipniss' use of exceptionally subtle black and white tones or, less often, lightly toned hues creates an overall atmospheric effect. His works have been described as conveying solitude and inward experience. Kipniss often uses the subject matter of a painting in a lithograph or mezzotint, sometimes with variations. His paintings date from the early 1950s. His main body of prints are lithographs and mezzotints, the former dating from 1968 into 1990, the latter since 1990.

Friedrich Bernhard Westphal was a German-Danish genre painter and illustrator. He was also known by his nickname Fritz Westphal.

Niagara is an oil painting by Frederic Edwin Church. Niagara was his most important work to date, and confirmed his reputation as the premier American landscape painter of the time. In his history of Niagara Falls, Pierre Berton writes, "Of the hundreds of paintings made of Niagara, before Church and after him, this is by common consent the greatest."

Christen Christensen was a Danish sculptor and medallist. His works as a medallist include the Royal Danish Academy of Fine Arts' C. F. Hansen Medal and Thorvaldsen Medal.